The previous installments of Save Me chronicle a dark series about a cult and its leaders. The final set of episodes wrap up the plots in an imperfect manner full of slight contradictions, but still manages to wrap the series up in an emotionally satisfying manner. The characters motivations are fully fleshed out, most of the villains get their karmic retribution, and the themes come full circle while ending on a slightly ambiguous note.

First off, I must continue where I left off on my last review about my disappointment with the Spiritual Father as the series villain. We learn the secrets of his dirty past: he faked a certificate to become a pastor of a different church, he’s gone to jail multiple times on charges of money laundering, and has had a less than savory past with underage women. It is confirmed that he indeed killed Apostle Kang’s daughter because she tried to resist his sexual advances.

The type of person he is becomes entirely clear; he is narcissistic and obsessed with power to the point of being deluded with thoughts that he is actually God almighty. However, at the same time, he doesn’t appear to believe in the principles of his own cult and, in one scene, even reveals to Sang-mi that his intention from the start was to have his way with her and earn money and influence. This inconsistency in his motives along with the lack of complexity in his character made him an unsatisfactory villain. 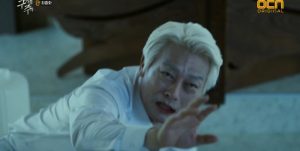 However, his demise at the end was fitting. He burns to death by accidentally knocking over some burning books in a fit of deluded thoughts of immortality and invincibility — a manner suggestive of the old Icarus and the sun fable.

Sang-mi’s mother was another character that I had issues with. She does not ever get any treatment for her mental illness from Sang-jin’s death and it accumulates in severity over the course of years. In fact, the cult leaders are revealed to be deliberately worsening her condition by feeding her pills that cause her mental functions to slow down. Despite this fact, once she stops getting fed these pills, she almost instantly returns to a normal mental state. The sudden reversal of her illness seemed almost magical, which doesn’t bode well in a series intending to forward cynical messages about humanity.

Finally, Apostle Kang is revealed, in the end, to be the only person amongst the ranks of the leaders to truly believe in the doctrine of the cult. Apostle Jo is only in it for the money, and the Spiritual Father only desires young women and power. After a revelation from “the almighty”, she attempts to set the church on fire to start anew, abandoning the Spiritual Father. 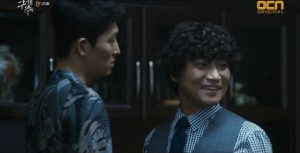 One character that I wish got more development was Joon-gu (Jo Goon), Dong-cheol’s protector figure from prison. It is never fully revealed how the two met, or what occurred between them to cause Dong-cheol to owe him a favor. In the brief moments where he talks to other characters, it is indicated that he has a nihilistic outlook on life — doing whatever he can to get by and regarding abstract concepts like morals as meaningless. It would have been interesting to get a deeper look into his life philosophy.

Our heroes — Dong-cheol, Sang-hwan, Sang-mi, and their friends, are given a relatively happy ending. Sang-mi is freed from the cult because Apostle Kang turns her back on the spiritual father after discovering his duplicity.

Although reporter Hong So-rin is murdered, Sang-hwan manages to get the police to investigate Guseonwon by providing some irrefutable evidence of the spiritual father’s less than pristine past. The rest of the cast rely heavily on phones to record the evidence of the wrongdoings of the cult. Sang-mi brings evidence of the spiritual father’s attempted rape, while Sang-hwan uses his phone to trick Apostle Jo into admitting that he killed reporter Hong So-rin. Things are too easily solved. One wonders how the villains don’t wise up to the phone taps. 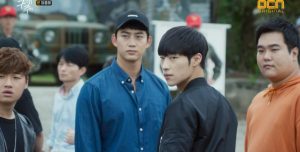 Sang-hwan also manages to uncover his father’s wrongdoings by playing through a tape recorder that his mom owns. It reveals that Governor Han purposefully pushed her down so that she couldn’t reveal his wrongdoings to the opposing party. Governor Han tries to coerce Sang-hwan into giving him the recording by holding his mother’s location as a secret in exchange for it. Of course, Sang-hwan doesn’t give up the recording and finds his mother by himself. This, again, is almost too conveniently resolved. Even if Governor Han managed to get the recording back, Sang-hwan could have easily made a copy of it. I wondered why Governor Han didn’t try to murder his son like he did his wife — it probably would have been the only way to silence him effectively. 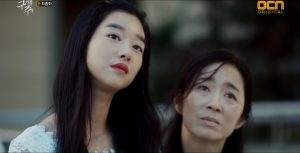 It would be unrealistic to have all of the hardcore cult worshipers to suddenly turn back on beliefs that they’ve held for years, so it was fitting that they would stay and keep the cult alive. This goes back to the earlier themes of mob mentality and how they render those involved susceptible to persuasion. Apostle Kang probably didn’t have to do much to convince them that she was the spiritual successor.

Another theme resolved was the power of influence. The characters cannot triumph over the cult without the help of a powerful key figure; namely, the chief of police. It is shown through Sang-hwan’s determination to get him on their side, despite his blatant hatred for him, that he is necessary for them to bring Guseonwon down. If Sang-hwan did not successfully persuade him, then our heroes would probably be still stuck in a rut. 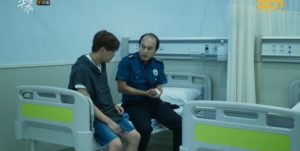 Overall, despite my issues with certain characters and overly smoothly resolved endings, Save Me still ends on a high-sailing note. Good things happen for our heroes, but their successes are slightly tinged with an implication lurking in the backdrop that the same thing might happen again to different people in the future. Its a happy ending that somehow suits the dark series well by being toned with cynicism.