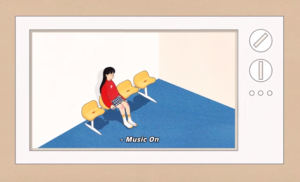 Although we love to romanticize relationships, the path to it can often be stressful, confusing, and difficult. Are we just friends? Or is it something more?

In contrast to the tropical music in trend these days, Eric Nam and Cheeze decide to bravely approach a classic OST originally sung by HowL and J for the 2006 K-Drama, Princess Hours. Princess Hours was one of the most popular K-dramas of that year across Asia. It produced a sequel and was even made into a musical. Already a beloved ballad, Cheeze and Eric Nam make it their own by simplifying the lyrics and by cutting the song length in half. The song contains a slightly faster tempo with softer instrumentals. The sincere plot of the MV depicts the uncertainty of love accompanied with a day-dreaming motif.

The original starts the strong chorus with a guitar intro. In this version they begin with piano chords while Eric Nam and Dalchong, the vocalist of Cheeze, sing back and forth. During this, we see an animated girl sitting next to an empty chair suggesting she’s missing her companion.

We’re then introduced to the sleeping female protagonist of the MV. A tiny animated couple wake her up by tossing a snowball to her face. Dalchong begins with lyrics about the agitation one feels when they’re unsure about their own feelings towards a potential lover.

I don’t remember when it started

I started to get a headache because of you

We continue to see the couple adorably act out romantic gestures– fishing and watching the snow fall– while the protagonist sadly goes about her day. 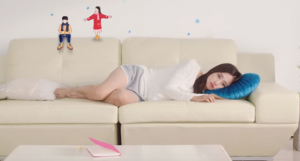 The animated couple personify her inner thoughts as she’s visibly irritated and contemplating the significance of those interactions. Noticeably, the couple stand out in bright colors in contrast to the protagonist dressed in white in a mostly white room signifying an emptiness.

Eric Nam comes in with a breathy tone as his lines confesses to obsessively thinking about his female counterpart. We see the animated boy shyly step towards the girl implying his hesitation to display his affection. Unbeknownst to the narrator, the boy is also unsure about his feelings. The cartoon figures continue throughout the video acting out cliché romantic scenes.

The female protagonist steps outside in a cute and flirty outfit as we are introduced to both a more colorful background as well as her smile. While she pets a animated dog carrying the cartoon couple, she is, to her surprise, suddenly interjected into a neutral colored shop. It’s as if she were abruptly awakened from a day dream. In the shop, she finds a music box that opens up to sing to her what she’s been contemplating all along:

If you feel the same, is this the beginning? 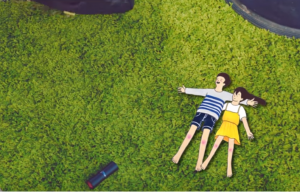 Eric Nam and Dalchong harmonize perfectly as the narrators finally realize they may be in love but now suffer as they wonder if the other feels the same. The protagonist continues to fumble about her day–dropping her tea and her purse– all the while the caricatures appear happily together first swimming and then laying on the grass together.

During the climax of the video, both narrators are no longer confused, and the girl in the MV walks towards a boy who is standing with a look of uncertainty. He pulls her into a hug, and she stands there awkwardly until finally embracing him as well. Mirroring their actions, the cartoon couple have also finally realize and accept their love as they now sit side-by-side in the original chairs from the beginning of the video.

The song compliments Eric Nam’s long list of collaborations and it might remind you of his other duets like “Spring Love” and “You, Who?” Dalchong accompanies his vocals perfectly as she steps away from the hip-hop genre that she and Cheeze were once known for.

Overall, a beautiful and slightly toned-down version of “Perhaps Love.” The MV shows the natural progression of love, and the confusion that comes along with it. While the journey to love may be rocky and perplexing, the song and MV show that the end result is worth the turmoil.