“Good Night” is DIA‘s latest track combining a picturesque music video with a bubbly, tropical sound. However, despite the hints of promise, it’s a fairly underwhelming track with a few key issues MBK Entertainment need to solve. These problems are relatively easily rectified, making it all the more puzzling that they chose not to do so.

Problem one: the backing music in “Good Night” lacks originality. It picks up on the tropical sound popular in K-pop right now, but this sound is hardly new. When we’re on what surely must be the tail end of an oversaturated genre, a group needs to provide something unique or interesting to prop up a style that has been done many times before. Unfortunately, the backing music sounds fairly generic and contains neither musical nor vocal variation. It’s catchy and inoffensive, but too subtle and bland for something so late in the “tropical” season. 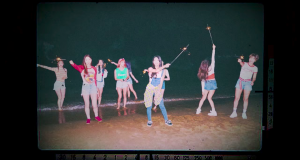 Problem two: the vocals are also extremely generic. They’re sugary sweet, which is nice, but there’s little to no shift in the tone, pace or style. Everyone is soft, sweet, and airy, and sound a bit like they’re talking to a baby. Chorus, verse, it all goes on and on in a seemingly endless, content parade of fairy floss pop. This style isn’t bad on its own, but without vocal variety such as a lower voice, a bolder rap break, harmonising, or group chanting, it becomes monotonous. This is worsened by the backing track mentioned earlier and even the rather repetitive, sweet but shallow lyrics. On their own, any one of these elements would have been fine, but together, aren’t strong enough to hold each other up.

It’s particularly disappointing when we’ve already seen examples of tropical sound done so well this season and earlier: Sunmi’s “Gashina” and Taeyeon’s “Why” show what can be done when a tropical sound has a kick to it, paired with powerful, varied vocals. Red Velvet’s “Red Flavour” and CLC’s “Meow” are great examples of a high-pitched, sweet yet energetic sound with variation. Unit Black’s “Steal Your Heart” and BTS’ “Save Me” are other examples of softer, higher pitched singing paired well with variation vocally and musically. At the start of the trend, DIA would be cut slack for venturing boldly into another genre, but at this point, they’re just jumping on the bandwagon, and it’s consigning them to being unmemorable at best.

Which brings us to problem three: the MV. Just like the music and the vocals, there are hints of something exciting, but those hints never mature. We’re not in a box — there’s an interesting forest scene where they’re glamping (glamorous camping), which is full of opportunities for various storylines or activities. Unfortunately, with the exception of the camera, most of the sets and props aren’t used to maximum effectiveness which exacerbates problem four: that DIA carry what they need to do well enough for the bare minimum, but don’t manage more than that. The pouting, posing for the camera, “sleeping”, and winking lacks a genuine quality or warmth. Good production and planning can disguise that; even having the girls be more active would eliminate the need for longer forced close-up shots.

It’s not clear what the girls are supposed to be doing. A lot of the time they’re resigned to being in the background of whoever is singing, just sitting, lying or standing around and watching. They could be reading a hiking trail map, eating, reading a book, or playing games, but they’re mostly just sitting there staring blankly or pouting, and it neither fits the setting nor interests the viewer. The actions don’t have any sense of energy to them, which leaves a somewhat limp impression.

The scenes where they’re hiding behind the trees again show missed opportunities. It could be a reference to hide and seek, but if it is, it’s the least interesting and most poorly played game I’ve ever seen. Why not have them play a proper game of hide and seek? It would fit in with the soft playful theme they have going on. This might produce more genuine reactions and give a better range of emotion.

Likewise, have them hike through the woods or climb a small mountain. There’s endless opportunity to show personality, through being tired during the walk, triumphant when they get to the top, a water fight to cool off or group high five at the top…even getting lost along the way gives a chance for humour. When they’re by the water, they could be racing, play-fighting, falling off, looking at fish, going in circles, but they’re not. The actions could’ve removed the emphasis on acting through facial expressions and provide an energy that is sorely lacking. 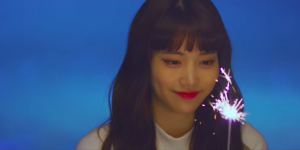 The emotional sparkler scene is interesting, if random (why a trampoline?) and would be more so if there had been more action previously. The stillness at night could have been juxtaposed against activities in the daylight, or the night scenes could’ve comprised different activities. The trampoline is under-utilised and appears at random, and there were missed opportunities for other night activities like stargazing, shadow puppets, spooky stories or a campfire which could have been used to good effect.

What was done well, though, was the consistent use of the camera and photo imagery throughout the MV and the stop motion effects. There was a clear photo and video theme, and the white borders of the MV looked like instant photo borders which fit well. The sparkler scenes with the girls on the beach were also a good example of using action and effects to create more energy and interest. The environment was beautiful, if under-utilised, and there were at least a range of different scenes from the forest, to the tent, to the beach. While the sleeping act at the end came across a little unnaturally, the turning off of the light in the tent was a solid visual effect and a good end to the clip.

There was so much potential, and so many easy ways to rectify the one glaring fault of this MV and track: monotony. It should have been able to inspire feelings of enthusiasm in the viewer, having us wish enviously that we were there through evoking images of fun and laughter. Ultimately, the MV failed to do so, and “Good Night”, unintentionally, is more likely to help put the viewer to sleep.