Elris Go For Simplicity in the Hit, "Pow Pow" 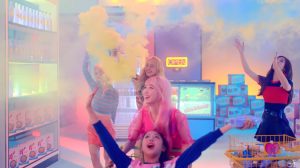 Elris pull out a simple music video and song in “Pow Pow” for a ridiculously catchy summer exit. The group is under Hunus Entertainment, and their new song is on their new album, Color Crush, which is the group’s second mini-album. “Pow Pow” is a simple but furiously catchy and wildly fun song for the group’s first comeback.

The video takes place inside of an imaginary super market and a colorful bedroom. It’s crafted like something out of the old cartoon, Blue’s Clues, with all of the props in the room consisting of thick outlines that look like they’ve been drawn instead of crafted. It’s full of familiar products but twisted to match the attributes of the group a little better. The cereal is named “Karin,” after the maknae of the group, and the Coca Cola-esque soda is named “Coca Bella” after Bella. These little references are littered throughout the video to give the girls an identity.

The entire video is littered with references to pows, explosions, and love. The choreography is even built to represent an explosion. The MV shows the group in a tight shape with one member bursting through the middle as the girls dance around her. Even the props in the video match the theme. The soda is shaken to prep it for the eruption. The popping of a finger snap illuminates a light switch, and they hop in the shopping cart to fling around colored smoke. It seems like it’s an attempt to illuminate what this kind of love looks like.

The video also does an excellent job of showing off every member of the group. Smaller groups like DIA have been called out for their over-reliance on a single member of the group for popularity. Elris is definitely not looking to rise to power off the back of one person. There is a nice mix of close-up shots of every individual and plenty of group shots. Whoever directed and edited the MV did a very good job of finding a balance between showing off each individual member and putting together interesting group shots that weren’t too convoluted. 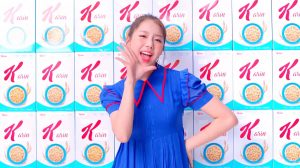 My only complaint about the video is that it seems to miss many of the reasons high-budget girl groups are using the colors and backdrops that they are. Elris uses these gaudy blues and pinks that are too similar instead of using shades of pink and blue that illuminate the beauty of these color combinations. It looks like some kind of baby gender revealing party instead of a planned and crafted backdrop to a MV. The colors are just too saturated and would be much more effective if they were tuned to match the colors of the girls’ hair.

Musically, the song is absolutely fantastic. Elris drags us through a neat guitar rhythm as the song drags on at a never-ending rhythm, only taking pause to give us a nifty pre-chorus that drops with little transition and a smooth bridge. Elris and Hunus Entertainment did everything right with this song. It’s a frantic and fun pop song that has a simple, but well-edited video that gives Elris fans all that they could ask for in the group’s first comeback.  They’re definitely going to be on my radar in the future since I still haven’t over-played this song.