ONF Turns Up the Charm In "On/Off"

WM Entertainment’s second boy group On and Off — styled ONF — debuts with a strong, fun concept. WM has stated that the group intended to show ‘a combination of opposites’ and their first song competently achieves that goal. ‘On/Off’ is cheery and uses contrast in sound and tone to present an entertaining first effort.

The MV uses space and technology to visually illustrate polarity while keeping to a consistent theme. The members interact with retro sets and props in the ONF Railway Station then dance in the futuristic, pristine space set. Stock footage of rockets taking off are scattered between the choreography and member solo shots. Sci-fi is a trendy motif, with AkMu and Twice already tackling space and retro fantasies this year, but ONF’s take is still fresh.

A familiar smile is Park Minkyun, now called MK, who participated in No Mercy when he was a Starship trainee but he’s not the only one with a bright expression. The mood of the group is ebullient as they perform their endearing choreography. There are a few cutesy winks and giant grins, especially from the youngest member, Laun. They’re not twee or cloying, but the mood of the video is still more sweet than aggressively cool.

The song has been promoted as ‘chill house’ but it’s not as laid back as the genre suggests. It has a definite summer vibe with liberal use of finger snaps and synths. The instrumentation gradually becomes more complex as layers are added from the singular EDM beat in the intro. The melodic structure relies mainly on the members’ vocals and an ear grating electronic sample that thankfully isn’t used too often. The production makes use of rhythmic and pitch differences to create strong moments of contrast within the track. These moments are conceptually consistent with turning on and off by switching between the high intensity and more relaxed, groovy points in the song. 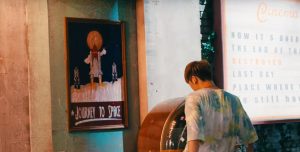 Vocally, there is also a mix of dynamic and easy elements but the energy of the track is overwhelmingly upbeat. The members attack their high notes with enthusiasm. The two rappers, Wyatt (Shim Jaeyoung) and MK take control of the downbeat parts with their lower ranges. Wyatt’s strong baritone is immediately attention-grabbing and his confident delivery distinguishes him as the main rapper. MK’s ad libs are competent and he seems comfortable switching between delivering rap and vocal lines.

The lyrics describe a relationship where the members address a mystery partner that can control the protagonist completely. The song can be interpreted as being addressed to potential supporters of ONF — meaning fans control the fate of the group so they’ll do anything to remain in favour.

You’re my producer, I trusted my all to you
Make me into your man, I’m yours
Blink blink, you turn me on and off
Even when it’s night, you surprise me
By doing whatever you want with me
Dance and sing, if you want it
I can do it, whenever

Overall, ONF presented a competent first effort: their space age concept fits in well with current trends, and the song is playful and appealing. The members pull out all the stops to charm with their winning smiles and refreshing choreography. Production wise, the song is cleverly made and well executed. It’s an engaging beginning that shows a bright future for the new group.