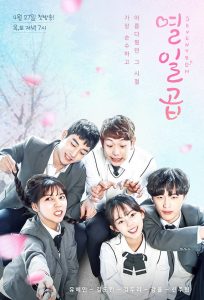 One day in early June, I was going about the usual motions of editorial work, combing YouTube channels for new releases. Chancing upon this sepia-tinted MV for a twinkly, sweet OST, I was enchanted by the tale it told of a pair of high school friends-turned-lovers. A chain of searches led me to Seventeen, an indie production by Playlist Studio, the team behind hit web drama Love Playlist.

The series was broadcast online through Naver TV and the studio’s official YouTube channel earlier this spring. In a push to cater to international viewers, the episodes were released weekly, with subtitles in nine languages, over the last month. With eight episodes ranging between five to eight minutes each, the show stays true to the web drama format which provides entertainment in bite-size pieces.

Short each episode may be, but it doesn’t skimp on quality, and packs an emotional punch. Seventeen might sound like a tempting casual watch for a commute, but it deserves the viewer’s full attention. The airy, sweet vibe evoked by the poster dominates most of the series, but there are surprising pinches of raw, melancholic moments as well.

The story is framed by a Reply 1997-style reunion between a group of five high school friends: Se-ri (played by Yoo Hye-in, formerly of disbanded DSP Media girl group Puretty), who aspires to be a singer; her close friend Seul-bi (Kim Doo-ri); Seul-bi’s neighbour, the gruff Hae-sung (Kang Yul); the chummy joker of the group, Joon (Shin Joo-hyup); and giant dork Eun-woo (Kim Do-wan), who turns up for the gathering late. 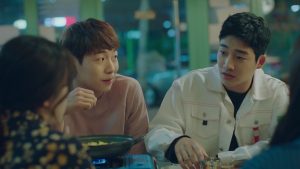 Each character’s story unfolds in an interspersing of their narrations with flashbacks to four years ago, when they were 17 (hence the series title). They recount crushes and first loves, and fallouts with friends. The vignettes are bound together by the theme of young love in its various forms—requited or unrequited, bitter or sweet—and also the element of possibility in relationships: the opportunities that come to you in a stroke of serendipity, or the ones that you create for yourself, and conversely, the chances that you let go of.

Every episode ends with an epilogue, often containing a twist. The twists make each episode delightful to watch as you come to anticipate it, but they aren’t included purely for dramatic effect; they also serve a thematic purpose to highlight the motif of chance—there’s always a possibility of a perspective, a key to the bigger picture, that the young protagonists just aren’t aware of.

The rest of this review contains spoilers for this drama. 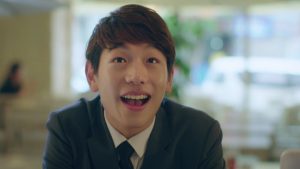 There are four main romantic storylines: Se-ri and Eun-woo’s friendship-turned-romance, Seul-bi’s crush on a senior who attends her cram school, her budding relationship with Hae-sung, and Joon’s unrequited love with a college freshman, Ji-hye (Oh Hye-su). Eun-woo and Joon are subtle foils to each other: both are cheerful and playful, and take initiative to wholeheartedly pursue the girl they like.

Eun-woo takes the elementary-schoolboy approach of teasing and pranking Se-ri, but because he never crosses the line into outright meanness or bullying, his juvenile shenanigans come across as amusing and charming in a silly way. Joon is more straightforward: he frequents the cafe that Ji-hye works at as a part-timer, tries to get her number, and walks her home. The outcomes of their pursuits vary—Eun-woo successfully asks Se-ri out, while Joon’s efforts end in heartbreak—but what matters more is that they went all-out with a kind of youthful candidness, despite the uncertainty of these outcomes.

While Eun-woo and Joon made their own opportunities, Hae-sung’s falls into his lap by chance when he overhears Seul-bi’s crush, Won-ho (Kim Hae-woo) tell a friend that he is making advances not out of genuine feelings, but just to keep her on the hook. This moment is revealed in an epilogue, shedding light on Seul-bi’s narration of the bizarre efforts Hae-sung makes, to her annoyance and exasperation, to puncture every possible romantic moment between her and Won-ho. 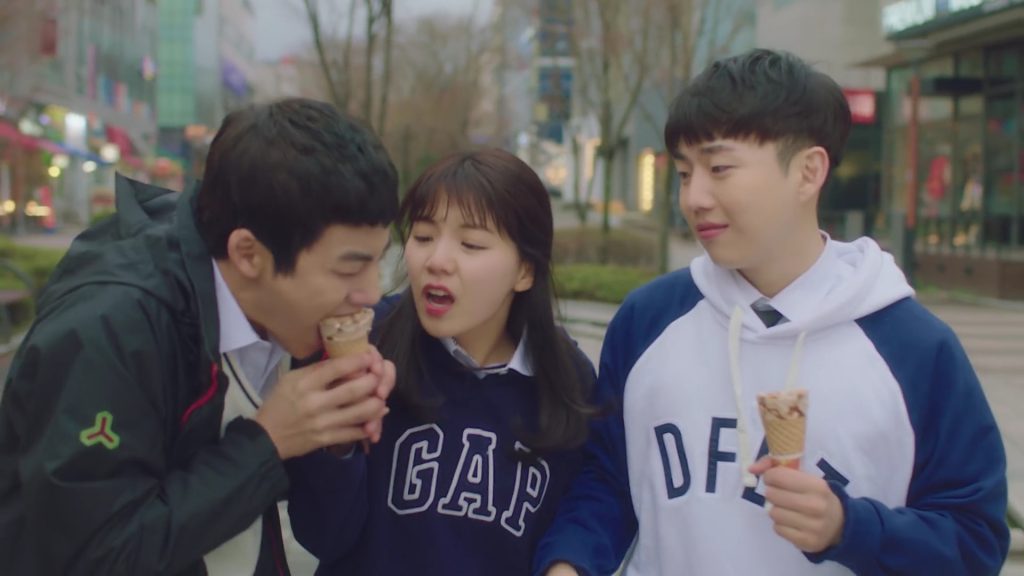 Whether Hae-sung was motivated by budding romantic feelings for Seul-bi is besides the point; what matters is that he cared for her enough to throw himself into all kinds of embarrassing situations, even incurring her displeasure, in order to save her from inevitable heartbreak. One thing that sets Hae-sung and Seul-bi’s relationship apart from Eun-woo and Se-ri’s similar friends-to-lovers story is that Seul-bi also makes efforts to grow closer to Hae-sung. The ambiguity of “who started liking whom first” is unravelled comically as Hae-sung and Seul-bi bicker in the present over their own versions of the same events. That this question is never clearly answered is the point, because their feelings developed gradually and mutually such that there isn’t a clear-cut timeline. 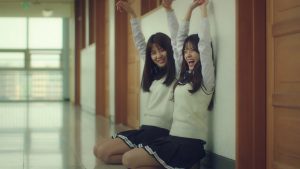 But the drama isn’t all unicorns and rainbows; it touches on the problems that spring from the insecurities of being young and in love. These affect not just the characters who are dating, but also their friends. Episode 3, “The Reason Why Close Friends Grow Apart”, depicts Seul-bi’s unease at the changes she perceives in her friendship with Se-ri after the latter starts dating Eun-woo. Both girls experience similar fears of growing apart, and their insecurities are easily fanned into flames of conflict by Min-ji (Yoo Eun-jin), a new classmate who is envious of Se-ri and tries to pull the pair apart.

While the tangle of Se-ri and Seul-bi’s insecurities meet with a happy resolution, Eun-woo’s insecurities lead to a heartbreaking ending. He mistakenly believed that he was only standing in the way of Se-ri achieving her dream of becoming a singer. For how much he adored her—or rather, precisely because of how much he adored her—he started to pull away from their relationship, growing colder until Se-ri, unable to bear what she understandably saw as his change of heart, breaks up with him. 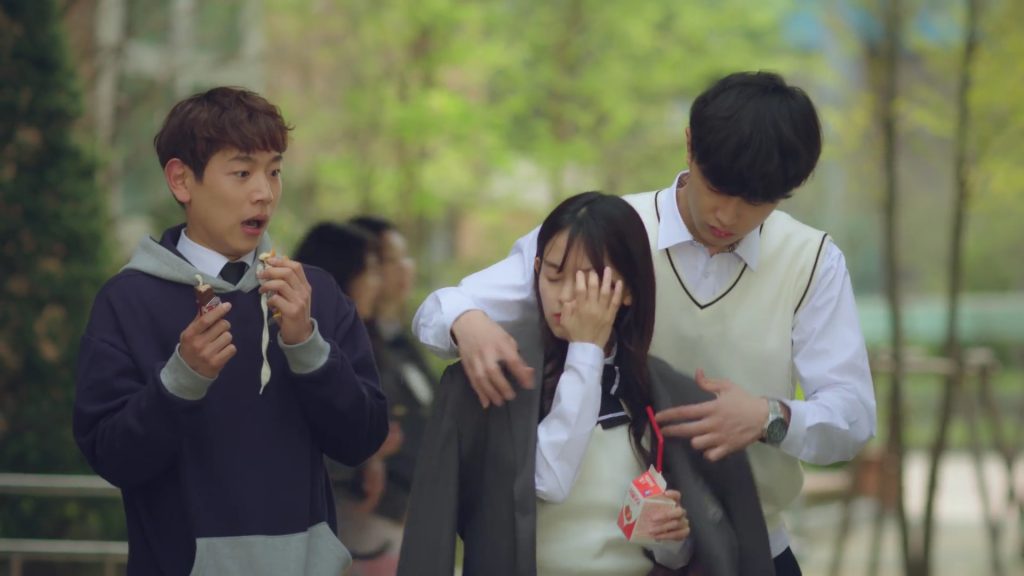 Call it the teenage version of noble idiocy if you will, but it’s a decision that the drama constructs in an empathetic light, however foolish and regretful it may seem from an outsider’s perspective and from Eun-woo’s own retrospective view:

I thought it was best for me to stay away from you. The best thing I could have done was to just be there, next to you. Why didn’t I know that back then?

The move is a completely understandable one that a boy at 17, acutely aware of his mediocrity in comparison to the big dreams of the girl he loves, would make. 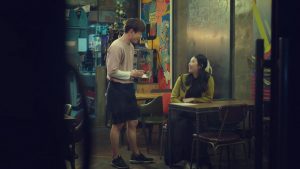 Despite the quiet devastation of Eun-woo letting his hard-earned opportunity slip through his fingers, Seventeen ends on a note of subtle promise. There’s a lovely symmetry in how, as Eun-woo and Se-ri’s relationship draws to a close, new hope comes unexpectedly for Joon’s one-sided love—a love that seemed to have ended and become a bittersweet memory—when by chance Ji-hye walks into the bar he owns.

Maintaining a balance of realism and romance, with a sprinkling of comedy throughout, the drama finally rests on this open ending. It reminds the viewer that even through all the growing pains and heartache, nothing is cast in stone for these young characters, and different possibilities for love remain, and leaves a message well-conveyed by the production team’s own words:

When we were younger, when we first learned what it was like to love someone
Although there were many flaws in how we loved and how we expressed love
Although you may fear the scars loving someone may leave in your heart
We hope that you’ll find the courage to love fearlessly, without regret
Because this is time we will never get back.