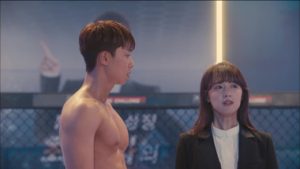 It’s been awhile since a drama series has had me eagerly awaiting its showtimes, and so it’s a little bit of a bittersweet ending for me now that Fight My Way has come to a close. As far as endings go, however, this show has truly proven itself to be worthy of its consistent ratings, and it’s nice to see hard work rewarded; Fight My Way peaked on its finale with its highest ratings yet — 13.8%.

Where we ended off in episode twelve, it looked very much like the show had its work cut out with a good number of loose ends left to tie up, especially with only four episodes left. In fact, even after episode fourteen, the show was still heading towards its ultimate climax, which came in episode fifteen, when Ae-ra and Dong-man broke up. Now that the series has ended, however, the scripting actually makes perfect sense on hindsight, and really sets it apart from your average romantic comedy.

First and foremost, certainly nobody would have thought that we would have the ultimate happy ending for Dong-man and Ae-ra — marriage! It is not often we have K-drama couples getting married. If anything, it was expected that Joo-man and Sul-hee be the ones to get married, but alas, we were in for a surprise. But ultimately, this all makes perfect sense. For Dong-man and Ae-ra, having gone through all that they have, having cared for one another so deeply despite not having been together, it sort of makes sense that they progress forward in this manner, sealing their love once and for all. 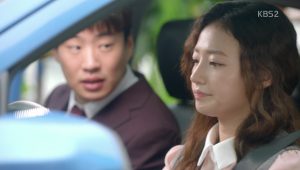 At the same time, it is also completely in character for the both of them; they’ve always been this way: all or nothing. Meanwhile, it is a little different for Joo-man and Sul-hee. Having been through everything that they have, they are now quite different from who they were before, and their relationship dynamics have fundamentally changed, and could even be said to  have been subverted. While it is without doubt that they still love one another, surely they will need time now to ease into this new state of matters.

Between Dong-man and Tak-soo, we also have our ultimate happy ending where Dong-man wins the match, with an audience comprising of everyone that matters. What makes the win all the more convincing and touching, however, is the fact that Dong-man clearly did not win easy. In the first two rounds of the fight, it can be seen that both athletes are rather evenly-matched, and it truly reflects all that Dong-man has had to go through in order to finally claim this victory — and what better way to end it all than for Dong-man to completely knock out Tak-soo with his infamous round-house kick, thus ending their decade-long feud. As a bonus, it was also pretty great to see Tak-soo somewhat come to his senses when he pleaded for Coach Choi to train him once again.

If anything, the only things that felt a little rushed were the matters of Hye-ran and Kyung-koo. For someone so fiesty and persistent, Hye-ran simply fell off the radar after moving into the villa, only re-emerging in the final episode which seems rather out of character for her. Her character served its purpose of highlighting Ae-ra’s kindness really well, but it would have been good if there had been a little more time dedicated to her sub-plot. Similarly with Kyung-koo, most of the drama had been dedicated to creating a really creepy and sinister aura for Kyung-koo. In the end, however, it was revealed that he was honestly trying to right his past wrongs, and it feels almost as if all that build-up had been for nought, even if it was nice to see that Kyung-koo had truly changed for the better. 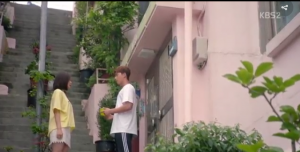 Nevertheless, as far as our fantastic four is concerned, Fight My Way has simply been splendid. From start till end, a perfect balance between the melodramatic and comedic was maintained, and the plot and characters pulled their weight in all the right ways. In terms of unconventionality, the show also ventured somewhat into some fresh waters: Ae-ra achieved her dream by being an MMA announcer rather than a regular broadcaster; Sul-hee stood up on her own two feet not by getting promoted within her company, but by seeking out new opportunities. Meanwhile, Dong-man kept up with his straightforward, slightly-brawny ways, while Joo-man continued his arduous climb in the corporate world.

Fight My Way has stayed true to the premise that it started out with, and truly delivered in its trajectory. Dong-man, Ae-ra, Joo-man, and Sul-hee are still, in many ways, the same, silly quadruplet that we saw in episode one, but they are, at the same time, so different now at episode sixteen. They are still naive, ridiculous, and impulsive, and will most definitely continue to face challenges in their lives; but they have also grown so much, and are now wiser, braver, and hopefully happier. Most importantly, we know that they will always have one another.