Dreamcatcher Finds the Light with "Fly High," a Prequel 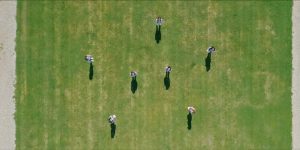 After the dark fantasy and metal tales of “Chase Me” and “Good Night,” Dreamcatcher turned on the lights for “Fly High,” the prequel to the aforementioned MVs. While a much brighter video and song, the nightmares found in the girls’ dreamcatchers are fully exposed in their French wonderland. “Fly High” exposes the intricate and dark story behind the witchcraft and satanic magic that ultimately drives the women to destroy the life and soul of a man.

The MV takes place on a French property and explains the past tragedies that led to the dark, gothic horrors in their other MVs. It’s assumed that the property is actually the hotel in the previous releases. Despite this horrific pain and tragedy that we know takes place in the future, the Dreamcatcher members here begin as innocent women with a fascination for the world. There are innocent shots of the girls running together in the sunshine, eating together, and even playing the piano. Unfortunately, these positive events unravel as the MV falls into darkness.

The beginning of the end starts with one of the most interesting and illuminating imagery throughout the video — the spider. This little storyline could have been the key to Pandora’s box. According to Native-American Ojibwe tales, the dreamcatcher is symbolism for the mythical spider women’s care for her babies. Her woven object protects girls and boys from nightmares. In the video, a spider is found and possessed by the girls until it is mercilessly fried through a magnifying glass; perhaps angering the spider women, ripping apart their dream catcher, and sealing their fate in their nightmares. 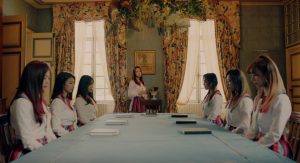 Despite the destruction of the spider, there is other evil conjuring and mysticism which alludes to other satanic attributes. There are leather bound spell books that might have another meaning along with a mystical mirror in the field that creates a thick black wax when touched. The most visually jarring moment of the video is the scene of an arm hanging from the bathtub. It’s a classic horror movie image when a person dies in the bathtub. The dead body’s arm is hovering over a faded red smudge on the floor, perhaps that of dried blood.

While the music and imagery shows a lighter side to the gothic horror show from the first two videos, the prequel still holds devilish imagery. The most obvious sign of it is the pentagram the group forms in the final shot of the video. Immediately prior to the pentagram, the infamous black and white photo of Dreamcatcher is shown to be created with the vicious stabbings of a knife; perhaps in an attempt to get it ready for framing. To accompany this imagery, the accompanying lyrics explain the horrors going on in the girls.

Perhaps the best part about this tragic tale is that there are more possible theories behind the Dreamcatcher story. This is my current interpretation of what happens, but there are other theories out there. I prefer to think the girls are working together to bring about their dark demise. But the witchcraft by one member could have tainted all of their souls leading them to conduct different actions to seal their fate — from closing the gates to the mansion to burning the spider. Dreamcatcher manages to add so many layers and possible answers to their story. But we’re only left to work with the visuals and the music. 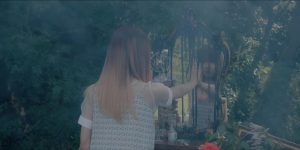 Dreamcatcher shifts between light and dark inside their music also. There’s a beautiful key change about halfway through the song that only lasts for a verse, then they effortlessly change back to the original key, exhibiting excellent showmanship. On top of that, the song itself switches between an anime intro and heavy metal interchangeably throughout the entire song. The way the producers manage to make such a fluid song through these heavy transitions is beyond me.

Dreamcatcher is a gift to K-pop and 2017. They’ve managed to add a fresh musical twist while finding deep imagery that is missing from most musical releases. Overall, “Fly High” is probably the most public-friendly release by the group so far. “Chase Me” and “Good Night” have much more metal influences than “Fly High.” On top of that, it’s their most musically dynamic release.

The next question is where do they go next? Do the girls tell the story of their haunting for love in the hotel? Maybe they add a story between “Fly High” and “Chase Me” to tell the story of how the beautiful French mansion became the haunted hotel that the mirror man comes to inhabit. Whatever it is, Dreamcatcher is here to stay if they keep producing the quality they’ve given us so far. Make sure to share your theory of the Dreamcatcher universe in the comments.