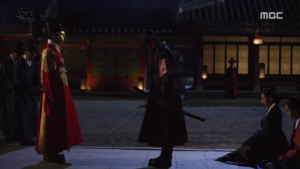 Ruler: Master of the Mask was hard to get through this week. Up until this point we’ve seen a lot of action–there have been battles, death, and intricate maneuvers by both the court members and Dae Mok and his associates. The plot has steadily built the conflict of the Crown Prince facing the Pyeonsoo-hwe and either failing and dying or winning and becoming a true king for the people. However, the last four episodes of the show have seemingly disregarded all the progress we have made in both plot and character development in favor of driving home that our male characters are “in love” with a girl that neither of them can have.

This review contains some spoilers for Episodes 25-28. We kindly ask that readers use spoiler tags in the comments when discussing the episodes that have yet to be reviewed.

Lee Seon and the Crown Prince were bound to have their showdown over Ga Eun’s affection sooner or later, but to drag this out over a whole four episodes was overkill. There are a few secondary points we get because of the love triangle’s collapse, but it was overshadowed by the overwhelming need by the writers to make us feel invested in these relationships when there are so many other pressing matters. The Pyeonsoo-hwe’s flower fields have yet to be found, and it’s been several episodes since this major plot device has been enacted. The Crown Prince’s focus has been on sending smoldering glances at Ga Eun while she goes through the queen selection process. 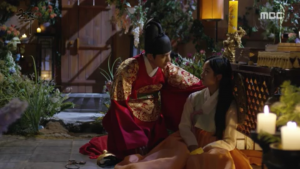 Both Lee Seon and the Crown Prince have shown to lose complete focus when Ga Eun is in the picture, which is proving to be detrimental to both men and those around them. For Lee Seon, it has caused him to lose most of his common sense. His insane jealousy over Ga Eun’s feelings for the Crown Prince greatly impaired his judgment for every decision he’s made. Even revealing himself as her childhood friend was not done out of the love he claims to have for her. He did that to discredit the Crown Prince. He hurt her to the bone in the hopes that her hatred for the Crown Prince would turn into love for him.

Furthermore, he didn’t stop to think about the situation involving the cure for the flower poison. The antidote was said to come from the Crown Prince, but wouldn’t something that important be delivered in person? What reason did the Crown Prince have to kill Lee Seon, when they’d been on friendly terms and had plans for the future? They were friends. So why would Lee Seon believe it was an assassination attempt when that made no sense? Because he listened to Hyunsuk, who was revealed to be working for Dae Mok. Lee Seon was so desperate to find more reason to hate the Crown Prince that he was willing to believe anything, making him miss out on his chance to be free. If only he’d shared information with his friend and ally, instead of plotting against him because Ga Eun only has eyes for the Crown Prince.

The Crown Prince is no better, willing to bet his own and Mae Chang’s lives to whisk Ga Eun away from the palace to live as traitors for the rest of their lives. But at least they’d be together and in love, right? The Crown Prince seems to have forgotten his mission is to take down the Pyeonsoo-hwe and regain his crown and throne, not try to play house with a girl he knew for a few days and claims he loves like no other. The Crown Prince has always said he wants to be a King for the people, yet Ga Eun is the only “people” he seems to care about. He couldn’t tell her the truth about the death of her father, instead taking the blame for the situation that led to her father’s death without giving her the full story. It’s as though all the weeks of not sharing information has taught him nothing. He’s already been discovered yet continues to hold on to secrets that now mean next to nothing. 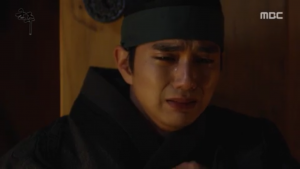 This blind love for Ga Eun will lead to his death if he doesn’t learn to handle his business. He walked right into a trap because he would rather confront Lee Seon with a petty argument over broken promises when the both of them have bigger problems. Lee Seon has turned to the dark side and the Crown Prince is too busy crying to realize he’s going to be beheaded if he doesn’t buck up and start fighting back instead of letting his enemies use this woman against him. And if the breakup wasn’t enough, Ga Eun gets kidnapped which means of course both Lee Seon and the Crown Prince must go to save her to show who loves her more.

We end this week with the Crown Prince captured for going after Ga Eun, even after Woo Bo reminds him of his duty to the people of Joseon and not just one girl, so it looks like this storyline will, unfortunately, continue to drag on. We have several story lines that have been set up for and not explored and not many episodes left to bring them to conclusion. Hopefully, the drama goes back to the intrigue and action that has been done to well and ends this silly love game.