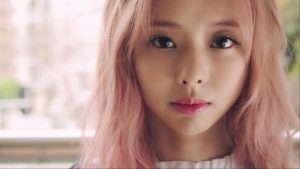 Blockberry Creative is six months into a planned year-long release party of their new girl group, Loona (styled LOOΠΔ). The ambitious project plans to announce a new member each month beginning from October 2016. The group is set to fully debut in 2018. The Loona project is another modern K-pop attempt to find a unique way to inaugurate a group into the scene. So far, the group has introduced six members: Jeon Heejin, Kim Hyunjin, Jo Haseu, Im Yeojin, ViVi, and Kim Lip.

Concept wise, each member has been associated with a color and an animal, which seems to hint towards a deeper symbolic meaning for the whole group group. Loona increased the mystery behind the group’s members by giving each one a solo video, while Blockberry Creative’s use of different genres and visuals has enhanced the curiosity revolving around the group’s sound and concept.

The first video, and the October debut, was Jeon Heejin, otherwise represented by a rabbit and bright pink. Her single, “ViViD,” is a sassy introduction complete with seductive spoken-singing and jazzy drums and a swing saxophone. She carries a mean verse and manages to encapsulate it into a substantive chorus.

The video for the first release takes direct inspiration from some of director, Jo Beom-jin’s other works, including Red Velvet’s “Dumb Dumb.” “ViVid” has French references, including French text and French-maid feather dusters. The rabbits perhaps allude to abundance; which is a theme through the video, seen in the excess of accessories, playing in glitter, jewelry, and decorations. The video was decked out in bold colors and ultimately ends with what looks to be a reality where  Jeon Heejin’s just a poor maid.

November 2016’s music video introduced Kim Hyunjin, who is represented by the cat and the color yellow in her single, “Around You.”

Kim Hyunjin channels her inner cat lady with the release of “Around You.” She discovers herself alone and the presence of something stalking her in her house, perhaps a cat. The video shows Hyunjin lamenting something, perhaps a lost friend or lover as she seemed rather alone. Maybe that’s why she’s the cat: her soul is lost and is only meant for wandering.

The cat imagery could also be a look towards the future and discovering the wiseness and nimbleness of a cat. In Japan, where the video was filmed, cats are also often seen as good luck. One of the few things in control throughout the song was Kim Hyunjin’s vocals. She manages to send her voice dancing through a decent vocal range without straining herself too hard, which fits well with the melody and background vocals supporting her.

Jo Haseul was introduced in December with the color green, a bird, and the music video for “Let Me In.”

The ballad video was filmed in the snowy expanses of Iceland and tells the story of long-haired Jo Haseul with brown hair and a short-haired HaSeul sporting blonde hair. The story follows brown-haired Jo Haseul using crystals found in the tundra to shoot down the bird version of herself with a slingshot. After many attempts, Jo Haseul finally finds her bird version and shoots it down on the beach, presumably destroying a part of herself she was trying to avoid. The destroyed plane seems to play towards a wounded bird that is unable to fly, perhaps a troubled past version of Jo Haseul.

While the video offers an interesting narrative, Jo Haseul’s vocals left a little to be desired. Of the three member MV’s released by the point of Jo Haseul’s debut, she might have been the most suited to ballads. But instead of playing to that strength, “Let Me In” used too intense of a background track to prop her vocals up.

Im Yeojin was the January debut. She’s represented by the frog and the color orange, and currently, she is the youngest member to debut. Her song, “Kiss Later” with it’s pure melody, shows some versatility with her vocal skills. From bubblegum swing-pop to more careful melodies, she manages to carry the song without seeming out her comfort zone.

The “Kiss Later” MV grabs imagery from popular fairy tales such as Cinderella, Alladin, and Sleeping Beauty with Im Yeojin waking up in her castle to three different princes. The video swings a modern vibe by exploring different rooms around the castle, all dedicated to one color, much like Oh My Girl’s, “Liar Liar.” The core of the video revolves around a frog requesting a kiss from Yeojin to become a prince — referencing Yeojin’s youth, purity and the fairytales told among young girls about love.

Skipping February and March, ViVi released her single in April. She dropped “Everyday I Love You,” featuring group mate Jo Haseul. ViVi is represented by the deer and is pastel rose, and she’s also the oldest member to debut.

“Everyday I Love You” is Loona’s take on retro K-pop. The video is full of retro influences and takes place in a skating rink full of blues and pinks pulled right from old-school neon lights. Everyone in the video is drenched in oversized clothes and excessive white washing. The music itself is a loving melody that alluded towards a perfect person, much like the video idolizing retro concepts and themes. Jo Haseul also showcases her ability to carry the retro synth sound with dreamy and thin melodies that carry the lustful feeling the video exudes.

For the most recent release, Kim Lip dropped “Eclipse,” the most stunning video so far, and has made a mark on the K-pop scene that other members have not. “Eclipse,” introduced on Mary 22nd, is a dreamy R&B song akin to the American artist Ariana Grande. As the sixth installment of Loona’s ambitious project, the song has the most potential on a world-wide scale since it has a Western sound and themes. Vocally, Kim Lip manages to find the high notes in “Eclipse” without adding strain. Instead, it’s a rather dreamy sound and each vocal line is baked together into a cosmic concoction of dreaminess and seduction.

Like with each past release, a music video accompanies the single from the May girl’s album, instilling Kim Lip as the owl of the group and her color as red. “Eclipse” is a turn towards a more mature sound and concept. It also dives into astrological imagery and themes.

“Eclipse” imagines Kim Lip as a celestial body being separated from a true love — much like a lunar eclipse, where the moon separates the Earth from the light and warmth of the sun, casting a red shadow over the Earth. After Kim Lip enters the building, she descends to an alternative world with other dancers and her owl appears. In the alternative world, Kim Lip gains a red light around her head resembling a halo, but could also be the red ring of the sun during a lunar eclipse.

The red resembles the passion Kim Lip feels towards her lover. She said it’s destiny after meeting in the shadows of the night. The owl, in many Eastern cultures, is the guardian of an alternative reality or the afterlife, and the owl controls the souls transitioning from one plane to another. The blink of an owl carries Kim Lip to her alternative reality with masked male dancers and identifiable women backup dancers.

In addition to the individual and group debut, Blockberry Creative has hinted that each member will be a part of a smaller group. These subunits will likely consist of four members each. The first group, known as Loona 1/3, dropped the song “Love & Live” with ViVi, Jo Haseul, Jeon Heejin, and Kim Hyunjin back in May. The subunit appeared on Inkigayo, making them the only Loona members that have been on stage.

The MV for the first sub unit debut, “Love & Live,” features the four members, but the music video focuses mainly on ViVi — seemingly because she had not been formerly introduced at the time, so she wasn’t a part of the existing group of Loona girls. Vivi stars as a robot who’s seen from the outside looking in, trying to fit in with the humans she wants as friends. It’s similar to the struggle of finding a voice in a group with known members and quantities.

On top of the six members so far, the only named rumored member is Jinsoul. The official Loona Twitter teased the next member on June 7, 2017 with a planned release of June 13, 2017. There is also alleged be to five more additional members and the plan is for them to launch in 2018. The strength of this mysterious and gradual type of debut is that it gives a more formal introduction to every member so people can choose their favorites before the group officially comes together in 2018. If Blockberry Creative is willing to throw this type of money around, it could be a formidable way to debut a group. 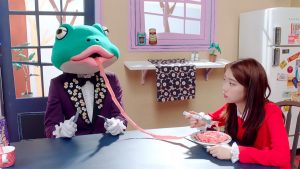 By highlighting each individual member instead of the group, they are creating a timeline where Loona is a sideshow between subunit and individual releases. Currently, the official music videos for each member and the subunit has totaled more than 3 million views on YouTube, which is about as many as Lovelyz’s “Wow” from their 2017 album (not the repackage with “Now, We”), “R U Ready?” and about twice as many as Laboum’s “Hwi Hwi.” Which actually earned them a show win. Then again, this is for six debuts. But they’re sitting in a decent area of YouTube views for a new group that isn’t from the big three or four agencies.

On the flip side, the group hasn’t actually shown much that could distinguish them from other girl groups — even with multiple releases. “ViVid,” while a decent song isn’t any special. In fact, the group released relatively average songs up until “Eclipse.” Though there’s variety, they haven’t tried anything unique in modern K-pop. They don’t have an obscenely catchy song like Pristin‘s “Wee Woo,” and have only appeared on a music show for one out of seven songs.

Even more worrying, Loona haven’t shown that they have any member with exceptional vocal ability and they haven’t managed to use their vocal talent in many unique ways. Jeon Heejin managed to give us a new vocal flavor, but the rest have been rather similar in tone. Much of the attention the group attracts is solely through their planned (and tentative) release schedule. While catchy and quality songs, they are still a new group who hasn’t quite had a hit. “Eclipse,” with the seductive reds and the Kim Lip hip shots, has hit a new high, but the song is a Kim Lip favorite, not so much a Loona hit. 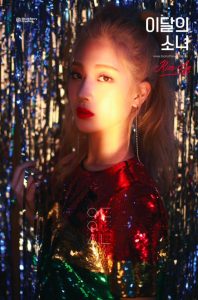 Looking to the future, the full group of Loona could have a variety of places they can go with the music they have shown so far. They have explored (albeit rather mediocrely) retro K-pop, modern girl group K-pop concepts, cutesy bubblegum pop, and now western R&B. Blockberry Creative’s approach of debuting each member separately could mean they see strength and potential in each individual’s musical and vocal talents — and will continue to promote them as individuals and not solely as an assembled group.

Loona are halfway through their project, but there are still seven possible debuts left in 2017; the unique approach of the member debut and the creativity of the agency could deliver up to 23 releases by the time the group officially debuts. One of those releases will likely be devoted to a break or the Loona 2/3 and 3/3 project, and their full inauguration should take place by 2018. Only time will tell if their series of pre-debut EPs and singles will be enough saturation into the K-pop market without an official group debut until then. Even without an official group appearance, though, the music and marketing strategy is a breath of fresh air. It’s up to Jinsoul to carry on the momentum of “Eclipse” and transition Loona into Blockberry Creative’s premier group.