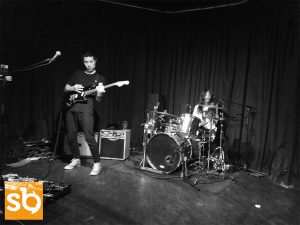 A dark dive bar in Northern England is the last place you’d expect to see a Korean rock band, but that’s exactly where the band 57 (pronounced “oh-chill”) performed as part of their European tour, “Making Fire”. The rock duo is best known for their hard rock and full sound. They formed originally as a trio in 2012, but after a member left they reformed as a duo under their current name, 57. They consist of Yoon Jun-hong on guitar and vocals and Kim Seol (or Snow) on drums, and their discography currently comprises one album and two singles.

I was most excited to see if they lived up to their reputation of delivering energetic and powerful live performances. And they delivered. Normally bands without a bassist don’t feel full or have as much of a presence like a typical band setup. But 57’s lack of a bassist isn’t noticeable, on record or live. They filled the venue with their music and both Jun-hong and Seol play with such passion that you’re too absorbed to notice. 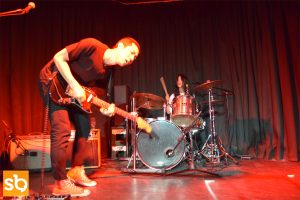 The song I was most excited to see performed live was “Pray For the Dead,” one of their new singles. In comparison to the rest of 57’s discography, “Pray for the Dead” is more mournful and much slower than their usual sound. It starts with Jun-hong singing with minimal instrumentation, his voice and guitar the focus of the song. Eventually Seol takes over singing, and slowly adds in her drums to the mix, slowly building up the song to shifting over to a more grunge, lo-fi sound. Hearing them perform it live brought a new depth to the song; both Jun-hong and Seol injected their vocals with emotion that couldn’t be recorded.

Even though I was already a fan of 57 before seeing them live, their performance solidified my status as a fan. They’re incredibly skilled and held the audience’s attention, even in the majority of them had never even heard of 57 before. I like listening to their music in general, but seeing them perform cannot compare. You just don’t get the same passion or energy from the recordings that you do from seeing them live. While that’s true of many groups, it’s incredibly apparent for 57.

If you’re a fan of bands like Brand New, Billy Talent, or Against Me!, do check out 57. If you happen to be in Europe this month, do check out a live show. You won’t be disappointed. 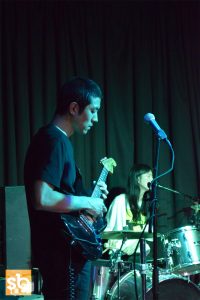