YouTube is the mecca of content when it comes to K-pop fans. There is where we can watch variety shows, dramas, and music videos. There are fancams galore, practice videos, and sometimes our idols even have personal channels where they upload content just for fan enjoyment. All in all, YouTube isn’t a new platform when it comes to K-pop fan consumption. However, with the establishment of YouTube Red–a paid, ad-free subscription–K-pop fans may be getting just a little bit more bang for their buck. Yes, bang, as YouTube Red introduces Run, Big Bang Scout, the first YouTube Red Original series to launch in Korea.

The series follows Big Bang on a camping trip, in honor of their 10th anniversary. The first two episodes were released April 26th, with the rest of the six-part series airing weekly on Wednesdays through the subscription. From the preview, it looks like Big Bang will be returning to the old days by participating in time-honored camping-themed events such as making their own food and sharing secrets around the campfire. The group’s dynamics and variety sense come out in the preview as well, with Seungri putting effort into hosting (which the other members reject), T.O.P showing his silly side, and G-Dragon returning to this debut giggly self. Both Daesung and Taeyang show quick wits while dealing with each members’ antics. Shot before T.O.P’s departure for the military, the show is a present for Big Bang’s fans.

Run, Big Bang Scout marks YouTube’s entrance into the world of K-pop streaming, which is different than the content it already possesses. Furthermore, it enters into competition with Amazon, who is gearing up to start its own K-pop reality show, and Netflix, who is simulcasting JTBC‘s drama Man to Man. The race is on to provide quality K-pop content as the market has shown itself to be prime for the picking. YouTube comparatively has the edge, as it already has the reputation among K-pop fans of providing a myriad of Korean entertainment.  Because of their familiarity with the market, it doesn’t seem as though this is as big a risk as it is for its competitors. Instead, it seems organic that YouTube would make this move considering its current content. 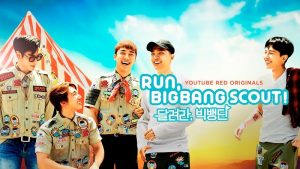 With the first episode available for free on Big Bang’s official YouTube channel, it seems as though YouTube has gotten the formula right for their inaugural K-Pop show. The format and subject are reminiscent of hit shows like Family Outing and 2 Days & 1 Night. The group comes out dressed in boy scout-esque clothing, asking questions about why they are dressed that way and what will they be doing. Seungri, who appoints himself MC, explains the concept of Big Bang scouts. The staff then explains the challenge that happened before the beginning of the series proper which leads to the formation of two teams–one that heads straight to the campsite, and the other that will go shopping. The members are almost giddy about the way the teams have been split up, ending the episode in the classic black vans recognizable from almost any variety show.

While not much happens in the first episode besides the setup for the remaining episodes, Run, Big Bang Scouts seems to be promising. The episode already has 3 million views in less than a week, with the comments highly in favor of the show. They range from amusement at the group’s antics to lamenting the small range of availability of YouTube Red, which is currently only available in South Korea, the United States, Australia, New Zealand and Mexico. Mostly, the first episode has captured its audience with the promise of shenanigans to come, and that alone is enough to entice most people into a subscription. Personally, I wouldn’t spend the extra money based on this episode alone, but you can start a free trial of YouTube Red to view the rest of the show and see if the subscription is worth it.

Companies are rushing to get their hands on a piece of the K-pop pie while it’s hot and it wouldn’t be surprising if Hulu joined the competition just to even out the playing field. The real winners here are the audience. International K-Pop fans, who previously had to scour the internet in the hopes of finding decent quality subs, are now being offered a plethora of content to choose from in a variety of languages on several platforms. And while for the companies this may just be a money grab at what’s trendy, for those of us living in a K–op world, it’s a buffet of options to choose from. Hopefully, streaming sites will continue to provide quality entertainment and continue to spread K–op in their hopes for internet domination.