K.A.R.D Gets Wild in Toronto 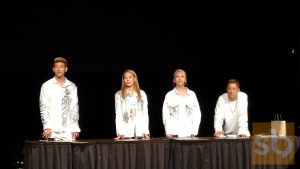 K.A.R.D made its final stop in the North American leg of the 1st Wild KARD 2017 Tour in Toronto, Canada on May 12th. In front of hundreds of fans, the co-ed group kept the crowd’s adrenaline pumping for one and a half hours by performing their singles, and covers whilst peppering in speaking segments. I did not know what to expect because it was my first K-pop concert. I was extremely pleased with my entire experience that included hi-touch and photo-op after the concert.

But all that did not come without a fair bit of confusion at the beginning. As fans were eagerly waiting to get into the theater, there was fan merchandise being sold to add to the hype. Among them was K.A.R.D’s light-up crown that had many talking. Why? The shape and colour bore a strong resemblance to Big Bang‘s flower light stick. Quite a few fans were wondering if the crown was K.A.R.D’s official  symbol, especially when they haven’t debuted yet. Conceptually, it makes sense given the group theme of playing cards but design-wise, it confused a lot of fans. 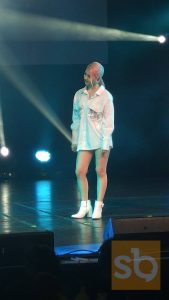 Eventually the lines got moving and everyone made their way to their assigned seats where….we waited some more. The wait built some serious hype and after a while, the lights dimmed down and it finally happened. K.A.R.D, alive and in the flesh, started off with “Don’t Recall” and the whole theatre collectively got to their feet to do the Lion Dance alongside the group. It was brilliant of K.A.R.D to have signature moves in their songs — they made a part of their choreography easy for fans to do alongside them. Another breath-taking moment followed during the chorus of “Rumor” when many fans had their glo-stick in their hand as they did the arm roll in sync with K.A.R.D.

After the two songs, the lights come back on and we hear B.M take the mic to start off their intro, ” Hello, we are K, A, R, D, K.A.R.D!”. The screaming and cheering didn’t cease for a second as the members went on to explain which playing card they were. B.M hyped up the crowd in English as the other members looked over the sea of people, waving and giving out Korean hearts.

Before the concert could proceed to the Q & A session, the MC came onto the stage to profusely apologize for the delay. The team considered cancelling the show due to technical difficulties but K.A.R.D pushed through for their international fans. The relief that flooded the theater was palatable. 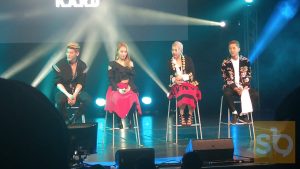 Then came the Q & A session, which started off with a bang. B.M got the first question that asked the male members to twerk and both were excellent sports about it. B.M managed successfully whilst J.seph gave the fans a passable yet very endearing attempt that involved some serious towel waving.

But was that the end of B.M’s fan service? Not in the slightest. When it was his turn again, B.M was asked to do aegyo. Being the team player, he stepped up and delivered. Since you have a theatre jam-packed with fans who are hoping to get their money’s worth by seeing B.M flaunt his sex appeal, the audience was not satisfied. Jiwoo, being the real MVP,  suggested that B.M should do a sexy dance instead. B.M’s final move had the crowd laughing as he was a) wearing pants with ripped knees and b) didn’t calculate the possibility of a friction burn whilst executing a particularly sensual move also known as the ‘floor hump’. His knees were smarting well after and they were almost as red as Somin‘s face from second-hand embarrassment. 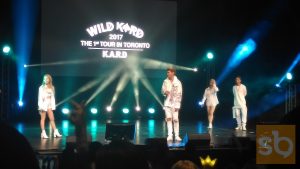 After the Q &A, the group went backstage to prepare for the stage again. During the waiting time, a behind-the-scenes video of K.A.R.D was played showing the quartet burning the midnight oil to nail their tour performances. The video ends with the group giving the camera tired yet satisfied smiles as it fades to black and the strobe lights came back on stage.

But not all of the members took the stage together. Within K.A.R.D, there were two sub-unit performances that night – a treat the audience drank up. First, J.seph and Jiwoo performed Rihanna‘s “Bitch Better Have My Money’, which had caused controversy as fans claimed at one of their US stops the two had said the ‘N word’. K.A.R.D’s tour manager went on Instagram to explain that they replaced the ‘N word’ with ‘hitta’ instead and even posted a Soundcloud clip as proof. The group took it a step further where Jiwoo and J.seph apologized on stage at their next tour stop and B.M explained that he would never let the members say that.

Speaking of B.M, he and Somin composed the other sub-unit and performed ‘The Way’ by Ariana Grande ft. Mac Miller. The ending move where B.M carried Somin off the stage garnered another round of cheering as it displayed the member’s easy chemistry with each other. 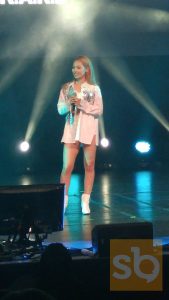 K.A.R.D came together once more to perform a cover of “Side to Side” by Ariana Grande ft. Nicki Minaj and whilst the male members did a stellar job, it’s the ladies’ vocals I remember most. In all of their singles, Jiwoo has only sung but in this cover, Jiwoo shows her rap skills as she takes on Nicki’s verse with ease. Somin also nails Ariana’s high notes with such clarity in her tone while providing a harmonious contrast with Jiwoo’s voice.

There was another fan segment that involved playing a game with the audience. Then without much of a preamble, K.A.R.D took the stage to perform a single that will be part of their debut. B.M went on to explain that it is a 20-plus year old song done by a co-ed group from their company but K.A.R.D is putting their own flavour on it. The song, ” I Will Never Stop”, came out in 1993 by the group ZAM and K.A.R.D gives it a modern spin with EDM sounds, dance breaks and rap segments.

The group finished off their night with “Oh Na Na” but immediately after they cleared the stage, the crowded chanted for an encore. That’s when their hidden card was played. I was waiting from the beginning for K.A.R.D to perform their hidden version of “Don’t Recall”, the song’s English version, since they’re currently performing for their international audience. Nonetheless, it was a great way to end the concert, to have the audience sing along as the members played around on stage, recorded videos and took photos of their fans. 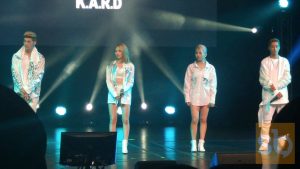 After that was the hi-touch, where the sight of seeing them up close put serious butterflies in my stomach. I took my seat to wait for my photo-op and observed others who were posing with the group.  But there is always that rebel who breaks the rules. This particular person took his moment to get down on a knee and present both Somin and Jiwoo with a single red rose each, which the girls graciously accepted. After the concert, that boy was still getting high-fives from the other male fans.

There are many other little moments I do recall (pun very much intended) like the guy next to me having an intense dab-off with B.M and K.A.R.D reacting to the fansigns.

I’d like to sincerely thank Pop! Goes The World! for bringing K.A.R.D to a city that I was able to travel to. Never did I imagine that the group that is at the top of my stan list from day one would be able to tour internationally before their debut. The experience was unforgettable.