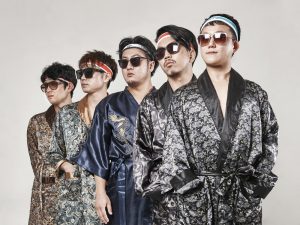 Have you ever thought to yourself, “this song could be more funky”? Or perhaps, “this song would be better if the accompanying choreography had more tambourine”? Then Sultan of the Disco is the band for you. I first came across this delightful group at K-Con LA 2016. They were a part of the indie band showcase that included groups like Love x Stereo. They were easily the most unique and captivating performance, even if I was originally there to watch Love x Stereo. With just that performance, a flurry of new fans were born. Including me.

Sultan of the Disco is a five piece funk and soul band, drawing heavily from 1970’s disco/soul groups like Sly and the Family Stone and Kool and the Gang. They originally formed in 2006 with members Nahzam Sue (lead vocals/dance), J.J. Hassan (vocals/dance), G (bass), Hong-gi (guitar), and Ganji Kim (drums). The frontman, Nahzam Sue, received a CD when he was a kid with music spanning 40 decades, but the era that captured his attention most was the 1970’s. They’ve been slowly growing in popularity ever since their formation, even playing Glastonbury in 2014 and releasing a Japanese single earlier this year.

Their music is an oddity in Korea. It’s not the pop or ballads most Koreans listen to; it’s not trot, it’s definitely not rock. They don’t stray far from disco and funk, but their biggest addition is their funny lyrics. In an interview, they said the reason they make their lyrics so humorous is because they know their genre isn’t normal or well-known in Korea, so adding humor is how they’ll garner attention. Plus, it gives them an international appeal.

Their take on disco is stellar; they are all talented musicians and it’s obvious in all of their songs. Disco is not an easy genre to tackle, especially if you’re playing bass. Take a listen to any of the famous disco classics and you’ll hear it: the quick, complex bass lines that reinforce and to the main melody. On top of that, in their more funk heavy songs, G easily slaps the bass, a technique that’s difficult to master, but is a staple of funk. The fact that G pulls this off so well is a testament to his skill as a musician.

Sultan of the Disco’s live performances are where their musicality and humor comes together to make for an awesome show. They always wear coordinated outfits that are flamboyant and loud. At K-Con, they wore silk bathrobes, board shorts, and sunglasses. And they rocked those outfits. Nahzam and J.J. have choreography the pair do while performing, with J.J. frequently playing a tambourine and hip thrusting so much that it’d make even veteran K-pop fans blush.  They never stop on stage, one of them is always doing something. Both J.J. and Nahzam are masters at engaging the audience. They easily got the crowd moving in LA. It’s hard enough to resist moving to any disco song, but when you add their combined charisma to those funky, funky beats, you’ve got yourself a recipe for a dance party. 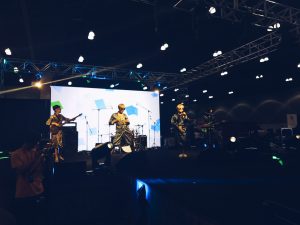 So if you’re looking for a funky good time, be sure to check out Sultan of the Disco. You absolutely won’t be disappointed. And if they’re passing through your corner of the world anytime soon, grab a ticket and be ready to get down.