Girl's Day Amaze In "I'll Be Yours"

It’s been a long wait for Girl’s Day fans– almost two years while they’ve been in Japan. However, that wait has ended, with their newest comeback entitled “I’ll Be Yours”. And yes, Girl’s Day, I will be yours, because right now, this is the best comeback of the year. 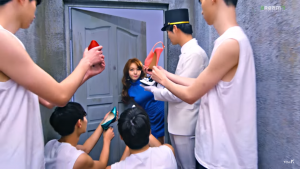 So far,  the trend for girl groups in 2017 has been in the quirky, cutesy vein of Twice. Even more attitude-laden tracks have had a cute, girly undercurrent. Not Girl’s Day. “I’ll Be Yours” is bold, brassy, and belty. The most obvious musical influence is swing and big band music; lending some serious groove to the verses and pre-chorus. The omnipresent horns cannot help but lend flair and sass, because horns make everything better. The solid track is then kicked into high gear when the chorus hits, accompanied by a rock-influenced guitar line. This rock-jazz fusion creates one of the most driving, most energetic, most addictive choruses in K-pop, to the extent that anyone who does not start singing along is quite likely a pod person.

The lyrics are just as kick-ass as the instrumentation. Girl’s Day are not pining in the corner, hoping their crush object notices them. They are going after who they want, full speed ahead and damn the torpedos. “I’ll Be Yours” is the last step before showing up at his door wearing nothing but fuck-me heels, holding champagne in one hand, and a box of condoms in the other. And if, for some unfathomable reason, the guy’s not interested, Girl’s Day will just find men who are.

Masculine and feminine are viewed as polar opposites, and because masculinity is typically associated with strength, femininity is often seen as frail and helpless, and, in K-pop, female acts with a tougher image tend to shy away from more feminine looks. However, there is strength in the feminine, strengths that Girl’s Day embrace and embody. And Girl’s Day, whether sexy in short-shorts or rocking a casual ballgown, are most assuredly feminine.

The entire MV is based around juxtaposing their feminine appearances with harsh, masculine environments. Everything is exposed brick and harsh lighting, with men making up all the people the ladies interact with in their solo shots. Visually, they do not fit in with the sets. Yet, they never carry themselves like that. They act as if they have all the power, and by the end, they do. 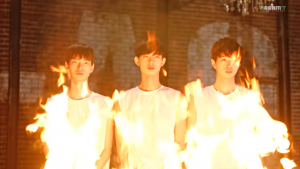 Sojin is lounging in a barbershop, and is apparently ignored by all the men shaving. Yet, with one twist of her stocking every eye is on her. She may not have them panting at her feet, but the impression is that’s only because she doesn’t want them to. Yura is playing piano, in a long, feathered skirt, which is the kind of apparel that usually screams “I’m a bubble-headed ditz”. Yet her playing is so masterful and so controlled that she doesn’t flinch when her piano catches fire– and her admirers are so enraptured they don’t flinch when they catch fire.

Minah has some fun playing with the Cinderella archetype. Typically, losing one’s shoe is a surefire way to invite comparisons to The Damsel in Distress. But while Cindy lost her shoe fleeing from a man, prompting him to rescue her, Minah takes her shoe off, hands it to a cute guy, and power struts away. Sure, he’ll come chasing after her, but let’s be real: Minah’s got the real power; she’s just letting him think pursuing her was his idea. (Spoiler note, gentlemen– everything is your girlfriend’s idea). We later see just how much power she has; rather than one cute guy, she has an entire shoe-carrying harem to pick from.

And then there’s Hyeri. She watches a boxing match ringside, bedecked in a fabulous ball gown and perfectly comfortable there. That is, until her red-geared bae loses the fight, at which point Hyeri KO’s the prick who gave her bae a beatdown, still in her finery. More important, though, is how she does it. She stomps on his foot while wearing stiletto heels. 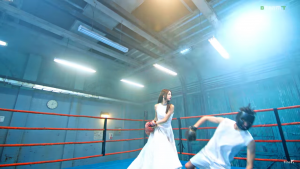 Heels are the ultimate in feminine accessory, and the ultimate item of hate for a lot of women. Stilettos are impractical, uncomfortable hobbles that can also pierce bone if you put enough force into it. They are the ultimate symbol of power and femininity in one; to the extent that “backwards and in heels” no longer means “twice the work and half the credit” but “I’ll destroy you, and look fabulous while I do it”. That one shot is “I’ll Be Yours” in a microcosm; feminine and fierce, with each feeding the other.

There is nothing about “I’ll Be Yours” that needs work. The song is amazing, the MV more so, and the ideals are out of this world.
Rating: 5/5