Welcome back to Best of Weekly Music Shows! As we’re approaching the end of Q1, we’re seeing a rush of artists debuting and making their return. Highlight, Lipbubble, and Pristin all made their highly anticipated debuts this week. CN Blue, J-min, Monsta X, MVP, and Sixbomb were among those making their comebacks. Got7 nearly swept the weekly awards with wins on The Show, Show Champion, M! Countdown, and Music Bank. Jungkey and Wheein (Mamamoo) were able to get top honors on Inkigayo.

Without further ado, here are the performances that stood out to me this week.

One of the standouts of the week is Highlight. Their bold bathrobe-donning M! Countdown debut performance was just too good to not choose. While some may say the styling was a bit of a mess, they seemed to be so happy to be on stage again. These guys have definitely embraced their new freedom and are hamming it up at the first opportunity. The whole production is built up and excessive, but altogether a great comeback redebut reboot for a group that is aware of how they want to progress with their image and sound.

BtoB have really hit their stride with this uptempo, funky number. While their ballads put them on the map, BtoB are a group who are capable of putting together a dance performance. “Movie” is their happy middle. While the costumed Music Core performance is definitely worthy of this list, I opted for the Charlie Chaplin inspired Music Bank one because it felt more put together, although arguably less comical. These guys are so entertaining and even under their playful veneer, there is a sense of sincerity in the music. Side note, Sungjae‘s solo moments where he did a mid-air heel click and where he ripped his moustache off are not to be missed.

While I didn’t care for their extended intro, I think “Never Ever” was an interesting song to close out their Flight Log series with. The song is glitchy and plays with some intriguing variations in rhythm. On stage, they definitely feel more complete this week with Jackson returning to the group, after taking time off to recover his health. While he still didn’t seem to have as much energy as he usually does on stage, hopefully he continues to get better.

“Fingertip” is such an intriguing move for GFriend. While the girl group has been relatively established in their innocent, girl next door dance concept, “Fingertip” marks the group’s attempt at finding something a bit edgier. As an organic next step for the group, it makes sense. Rather than pigeon-holing the group, “Fingertip” serves to expand the boundaries of the GFriend brand. Execution-wise, the MV and choreography did leave a bit to be desired, with the MV feeling too convoluted and the choreography needing a few more level changes to keep the dance from feeling too uniform and one note. However, the girls still show up on stage and their production feels sleek and not too far off from where I think they want to be.

This is quite an underrated gem from Lovelyz. I think more than ever they embrace the quirky, cute space, and this song and performance prove that the excel in that. From the styling to the music and performance, everything plays off as this well patterned, ornate, and unique set piece. Lovelyz, of course, do their part in playfully giving off shocked expressions, and the girls continue to shine with their vocals.

It’s great to see all of B.A.P together again — well almost all of them. “Wake Me Up” is probably their most polished title track since restarting their activities with TS again. It sees Bang Yong-guk joining the group on stage again – although the performances this week are without Himchan, who is out with injury. “Wake Me Up” is a well thought out and executed concept. From the mid-song introduction of Bang Yong-guk into the group to the change up of members on stage at any time, it’s a smart use of blocking to add some dynamics.

While Brave Girls’ have undergone a complete reformation since their debut, this set of members is quite good. Their materials since “Deepened” have been strong, and I don’t think they get as much credit for rocking these Brave Brothers’ songs as much as they do. “Rollin'” has a great rhythm to it. If you are familiar with Brave Brothers in any capacity, you can recognize his signature synths in any song. That doesn’t detract from the very inherent ability of these ladies to pull off his music with as much charisma as they do on stage.

Among the long-awaited debuts, Pristin is one that I’ve been keeping my eye on. Born from the predebut Pledis Girlz, this group features many of the Pledis trainees that were on Produce 101, including the IOI members Nayoung and Kyulkyung. Pristin have honed in on this spirited girl next door concept. The ten member group has embraced this lighthearted pop number and run with it. Their stage really helps to enhance the song with really whimsical moments thrown in, like Nayoung’s steering wheel/pedal move or the aspirational glamour close up at the end.

While some have compared them with Twice, I think there are a good number of differences between them. For one, Pristin does have a hand in their own production, something Twice has yet to do, and a second point of differentiation is that Pristin seems primed to head in an edgier sound and direction, something their performances of “Black Widow” have demonstrated. Of course, Pristin is still a rookie girl group and right now, the gulf in popularity between any rookie girl group and Twice seems immense. Hopefully, with these areas where Pristin can develop and start to own in the market, they’ll find a place for themselves in K-pop because more than anything, “Wee Woo” shows that these girls are brimming with potential. 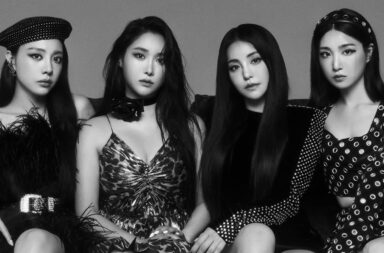