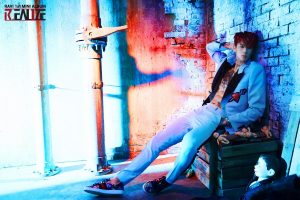 VIXX’s rapper and lead songwriter, Ravi, has returned with his first EP, R.Eal1ize. Starlights were somewhat up and down about the overall quality of the rapper’s first attempt at releasing a complete solo project, last year’s R.EBIRTH mixtape. However, that didn’t stop fans from praising some of his actual songwriting prowess, both as VIXX’s head wordsmith and on his own merits. Though a bit hesitant, fans were ultimately anxious to find out what Ravi would offer in his next solo project.

As tends to be the case with most K-pop mini albums, R.Eal1ze starts of quite literally with a bang. Lead single “BOMB” seems to really be a hodge-podge of influences, if not mimicry. Song construction is reminiscent of Suga’s “Agust D” in terms of its aggressiveness and lyrical intent:

I’m Justin Bieber, my haters say Jesus
“I hate and hate but why isn’t this bastard going down?”

All your useless chirping
There’s no way it’ll interfere with my life
Cuz me and my brothers, we’re always sweating it out

Meanwhile, Ravi’s delivery seems to favor T.O.P, and if one tilts it on its side and considers the wilder aspects, GD. The track is hectic, as it’s no doubt meant to be. While the title suggests a sort of chaos, ultimately “BOMB” is musically unfocused and lyrically uninteresting. Feature San-E didn’t do much to resurrect this mish-mash of a track from its mediocrity. A bop? Certainly. But, of course, no one listens to “bops” to take away any sort of deeper meaning, right? As far as getting fans on their feet, the track does succeed. Otherwise, while entertaining up to a point, “BOMB” is a one and done kind of track.

R.Eal1ze ultimately suffers from that same lack of focus and cohesion throughout, an unfortunate trait of a great deal of EPs, especially from artists intent on showing just how wide their range is. However, this isn’t Ravi’s first time around a solo release. He doesn’t have anything to prove, certainly not to fans of his music. From the bombastic bravado of the opening track to songs that are more centered around sticky-sweet love and heart eyes back to more “bops” to get Starlights hype, there’s seemingly no connection from track to track.

Though some of Ravi’s compositions are decently melodic and earnest (as in songs “Rose” and “Home Alone”) others really are simple in scope and vision, being typical beat-heavy tracks using the same construction found in most offerings from idol hip-hoppers. Even the attempt at a house-dance track in “Lean on Me” is only half realized, seeking to fit the milky smoothness of deep house into the cutesy confection of dance pop. Ending the album on a basic midtempo ballad (“Moebius Strip”) speaks to just how unbalanced the EP really is. 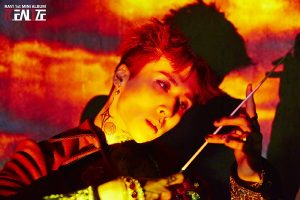 Lyrically while there are (much appreciated) attempts at depth and introspection as in “Moebius Strip” (“While in bed, my thoughts dance in my head and keep me from sleep again. Dancing like crazy. Endless shrieking. Maybe this time I’ll be taken to a different dream”) for the most part the mini is full of simple lyrics about love or even simpler about flexing one’s bravado. There’s very little meat, more small morsels of something heavier that manage to still leave the listener feeling empty.

It is quite unfortunate that the mini itself is neither musically intriguing or even memorable, because Ravi is really a competent lyricist. Lest we forget, this is the same young man who penned “DamnRa,” a scathing indictment on much of the misogyny rampant in Korean hip-hop, and by extension Korean society. I will also always give much respect to artists who have a large hand in their own projects. I can appreciate Ravi taking the reins and composing and writing the lyrics for the entirety of this mini album. That being said, that doesn’t always mean the result is that impressive. There are moments even within songs in which a listener can almost get invested, but then they simply lose interest. Features and controversy notwithstanding, R.Eal1ze is really an unexceptional experience.