Black Pink's "Playing with Fire" and "Stay": A Double Bill 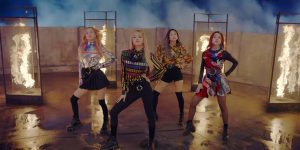 Keeping up the momentum from their debut with “Boombayah” and “Whistle”, Black Pink is back with another double bill that is more subdued in tone, but nevertheless shifts them towards a potential niche sound.

As mentioned in our rough translation of their debut tracks, Black Pink bears resemblance to, and may in fact be modelled after 2NE1—not necessarily a bad move, considering the latter’s success in the market. But this comeback reveals what seems to be a dual strategy: while the group is riding both the strong image and the sentimental side of 2NE1, they are, at the same time, starting a process of differentiation.

Arguably, the process of differentiation had already begun with the debut singles, which had a notable fierce factor but paired it with a more girlish vibe, especially in “Boombayah”. But it is more apparent in this round of comebacks. The choice of the title, “Playing with Fire”, is perhaps not coincidental, invoking 2NE1’s “Fire”, but it moves towards a more sultry sound that is distinct from 2NE1’s style.

The track pulls from tropical house, but adds a pop bent for mass appeal. It’s very much on the pulse of Western pop—the drop in particular creates an effect that brings to mind the drop in “Cold Water” by Major Lazer ft. Justin Bieber. Jennie‘s vocals shine in opening verse, while Rosé‘s voice is fast becoming one of my favourites with her on-point falsettos. Some of Lisa‘s rap verses are too nasal for my liking, but this could boil down to personal preference, as I haven’t been a fan of similar rapping styles of other YG artists.

The lyrics are pretty run-of-the-mill, likening romantic attraction and love to fire. And they also induce many a side-eye:

Is this medicine or poison? Not even my mom knows
There’s a robber in my heart but why don’t the police know?

The rhyming comes off as rather puerile as well: 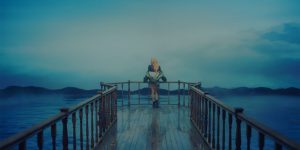 There is a current of tension between the sultry melody line and the syncopated piano instrumental paired with peppy synths. This tension is reflected beautifully in the visual contrast between the slow tilts of the camera and the groovy yet fluid dance moves. The lush blues and purples in Lisa’s and Jennie’s scenes by the lake also fit well with the richness of the group’s vocals. Aside from these, the MV doesn’t stand out much—the giant tacky “FATE” sign had me backing a few inches away from my screen, and why is Jisoo sitting in a closet?

“Stay”, with its folksy sound, is my favourite out of Black Pink’s releases so far. The group has a good mix of voices, but most fall within a lower range, which the song brings out beautifully. My only gripe is that the line “It goes a little something like” breaks the rhythm, but the rest of the track flows well. 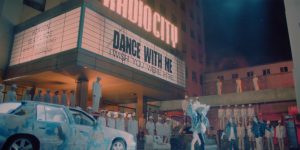 The MV makes a reference to “Heaven” by New Wave band Talking Heads through placing the refrain of the song, “Heaven is a place where nothing ever happens”, on a marquis near the beginning. The guitar accompaniment for “Stay” takes its base chords from the song as well. The lyrics from another part of “Heaven” also ties in with the MV:

It’s hard to imagine that nothing at all
could be so exciting, could be so much fun.

Through this reference to “Heaven”, the MV expresses longing for times spent with someone in which nothing much is done, but which nevertheless feels special and precious. This idea is brought out in terms of friendship in the MV, rather than romance, which is what the lyrics convey. There is some form of contrast between the scenes of the members listlessly wandering around alone and the scenes in which they play together, but the camerawork and editing doesn’t produce as striking a contrast or as acute a sense of loneliness as that of BTS‘s “I Need U”.

Another point of interest in “Stay” is a mild attempt at colour-coding the members. Lisa, with her teal dip-dyed ends, plays with handheld flares spewing green smoke, and walks across a beam with a billow of lime green smoke rising up next to her. Jisoo has streaks of purple in her hair, which matches the purple smoke grenade going off in the far distance as the girls stand atop a bus. 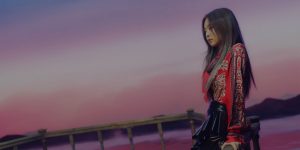 This faintly echoes the colour-coding strategy that Red Velvet used for their debut and the stages for some of their subsequent comebacks. It piqued my curiosity as to whether, like Red Velvet’s “red” and “velvet” concepts, there may a similar duality to Black Pink’s group name and promotional strategy: black as the chic, fierce side of the group, and pink as the softer, sultrier, or more fun and lively side. These contrasting qualities do seem permeate their two sets of releases, but it can’t be ascertained whether it makes a deliberate strategy until we see more future releases.

Neither the MVs nor lyrics for both tracks are much to shout about, but the songs themselves do a good job of bringing out the vocal qualities of the girls and moving the group towards a more unique sound. Here’s hoping they dodge the curse of the YG dungeon.

(YouTube, Lyrics via pop!gasa [1][2], Images via YG Entertainment. Special thanks to Cy and Lo for help with the song genres.)