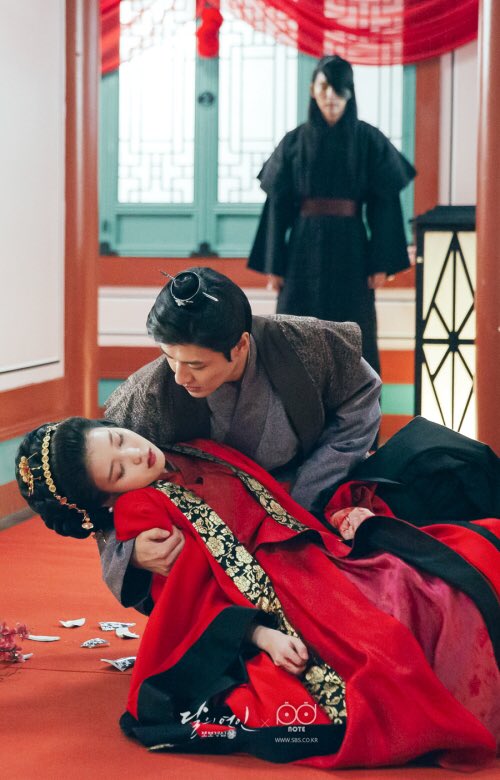 Many of you will be familiar with the Deus Ex Machina, a trope whereby the hero of a story is saved from peril by a device that was not sufficiently set up earlier in the story — the inversion of a Chekov’s Gun, if you will. The season one ending of The Legend of Korra is a good example of this. On the flip side, a Diablous Ex Machina happens when something good takes a sudden bad turn and defeat is snatched from the jaws of victory. It usually happens without much set up, and out of a need to maintain the status quo in a serialised work — the ending of just about every Samurai Jack episode is an example of this.

Then there’s the Diablous Ex Nihilo, which is just like the Diablous Ex Machina in that it suddenly ups the stakes in the narrative, save for one difference: the negative consequences don’t necessarily stick, and the issue is usually swiftly and neatly resolved. And if you are looking for a work that exhibits this trope, then readers, I give you Moon Lovers: Scarlet Heart Ryeo.

Warning: the following contains mentions of self-harm. Spoilers for the Korean version of the drama are also included, but not historical ones.

Moon Lovers has already subjected us to one Diablous Ex Nihilo, albeit a subtle one, at the juncture between episodes two and three, when Ha-jin (IU) decides to follow So (Lee Joon-gi) into the forest. Sure, she may not know that he’s chasing a bunch of armed assassins, but why is she following a guy she swore to avoid (after he tried to choke her a couple of times, I might add)? It feels out of character, but the ensuing confrontation gives us our first love triangle face-off, as well as a handy piece of information tied to the bad guys that makes Ha-jin’s involvement suddenly relevant. 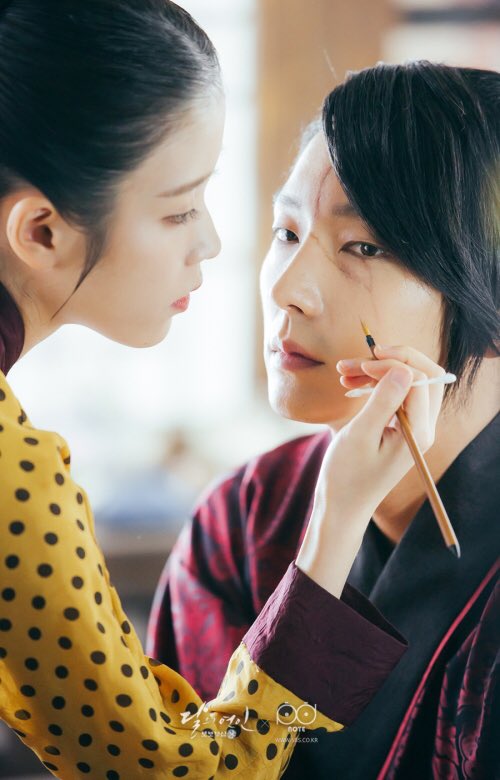 What is the reason for this entire plot point, though? Well, it’s to get Ha-jin into Damiwon Palace itself, so that she is closer to the action (and So). As a court lady, Ha-jin gets to wield her skincare and cosmetic knowledge to treat Crown Prince Mu’s (Kim San-ho) ailment, and cover So’s scar before an important rain ritual. While the former gets her a powerful ally and some perks, the latter may end up having more sinister consequences.

I find the set-up for So’s Gwangjong reveal unsatisfactory. Ha-jin momentarily wonders which prince will become Goryeo’s fourth king, but then she (and I) get distracted by Wook’s appearance. Gwangjong is mentioned again when Ha-jin falls unconcious from her own bloodshed, but we don’t hear much else until she starts getting these red visions of So as Gwangjong, slaughtering his family for the throne. From her most recent conversation with Astronomer Choi (Kim Sung-kyun), it seems that these are psychic visions of the future… Or they are visual representations of events that Ha-jin knows are going to happen.

The visions have a use in planting the seed of doubt in Wook’s mind when he hears her mumblings, which will be further encouraged by his growing suspicion of the relationship between So and Ha-jin. The fear they instil in Ha-jin also works into So’s arc, where he now finds the one person who was in his corner, turning against him. However, while the consequences of this reveal, and the reveal itself, added value to the drama, the set-up left something to be desired. The set-up also screwed Ha-jin over in how evocative her response could have been, but I feel like whatever was on the script, the director would have still told IU to gape like a fish.

As for that forced kiss,I am not here for it; and I don’t care if there is a ‘better’ version, this one shouldn’t have existed in the first place. After basically man-handling Ha-jin for a number of episodes, it seemed like we had finally reached a good place with So. When he confesses to her after she applies her special BB cream, he also grabs her shoulders and leans in for a kiss. But when he sees that Ha-jin is unresponsive, he gently lets her go. That’s what I want to see in dramas! Not some forced back hug and kiss because So is suffering from a bout of man pain. Yes, I feel bad that his mother still doesn’t love him, but that is no excuse to force himself on someone else. 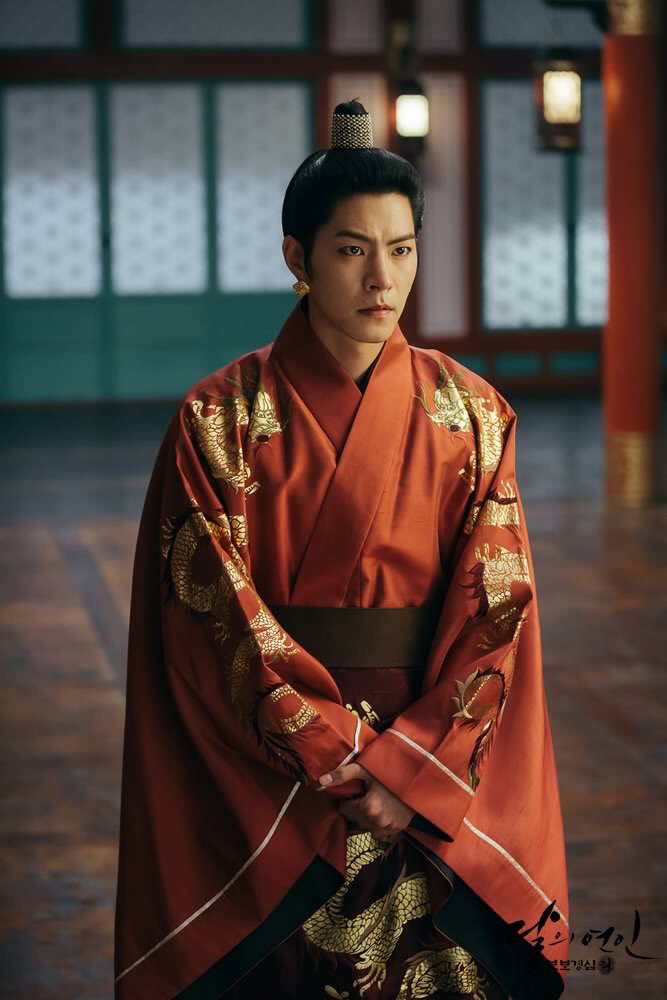 I personally, cannot believe that Team Villain waited so long to try to recruit So to their side. And the way they did it too, by just telling him straight up to kill Mu, while their youngest brother was still in the room. Why didn’t Mummy Dearest just accept So’s offer after his Kill Bill moment in Episode 3? It feels like the writers didn’t go that way because they wanted to keep So as a good guy, to make his reveal as the murderous Gwangjong even more dramatic. I can’t say it doesn’t work, but, like a lot of the decisions I see being made by Moon Lovers, it definitely feels like they went with the easier option.

Looking forward to the next episodes, I am definitely interested in seeing more of Head Court Lady Oh (Woo hee-jin). She’s the strict-but-kind mentor that Ha-jin needs, and that Myung-hee could never be. She gives less frustrating advice than Astronomer Choi, and also has an intriguingly romantic backstory with the king himself — she is definitely one to keep and eye on.

The side stories should be noted as well, since it seems some thought has gone into their set up. General’s daughter Soon-deok (Z.Hera) is going to make me so sad with her marriage to Eun (Baekhyun), but I am already endeared to her; the scenes with Eun and her father (Sung Dong-il) were adorable, and I am looking forward to the general’s future interactions with his student, So. It’s a shame that this kind of thought couldn’t be spared to the royal wedding a couple of episodes earlier. Another love line has also been set up between Baek-ah (Nam Joo-hyuk) and mysterious high-born sword-dance lady (Seohyun); contrast this with Ha-jin and Baek-ah’s sudden friendship, brought on by a drunk flashback that probably stumbled into the episode and fell asleep wherever it landed.

Moon Lovers is a drama where plot rules. This shouldn’t be a bad thing; but when characters and their relationships are forced to be compromised in order to make room for the plot, the resulting inconsistencies will cause the quality to drop. Not that anyone in charge cares anyway since Moon Lovers is achieving its aim of furthering Hallyu in China and beyond. I’m just upset that everyone is working hard to ensure success in every aspect but the one that should matter the most.

Readers, how are you finding Moon Lovers? What are some other Diablous Ex Nihilos you have seen?

Moon Lovers Ep. 1 to 5: My Favourite Character is Already Dead

Moon Lovers Ep. 10 to 15: Glimmers of Goodness Amidst Poor Pacing