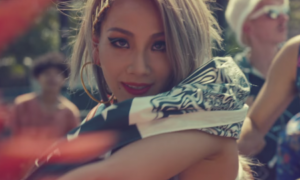 Her third release since proclaiming to enter the US market, “Lifted” marks CL’s official US debut single. Dropped on the public without much warning or anticipation, and on the same day as Big Bang’s 10 year anniversary no less, the song and MV is vastly different from what we’ve come to expect of CL’s crossover releases. Nowhere near the unyielding production of “Dr. Pepper” nor the over-the-top posturing of “Hello Bitches,” “Lifted” is by comparison much more mellow and laid back. In fact, that’s most likely the intended vibe since the topic of the track, as one may guess, is about consuming cannabis TCH for recreational purposes; or as the kids call it nowadays, smoking weed and getting high. Yes, that same activity that can get you arrested in Korea and got G-Dragon in a ton of trouble a while back.

The song’s concept places CL as your trendy, glamour-focused ‘it’ girl meant to elicit the admiration of today’s youth. And for the most part, it gets it right, painting CL as cool, confident, and sexy. “Lifted” may on the surface seem like your basic stoner jam but it’s actually so much more. If the MV is any indicator, it encapsulates an entire lifestyle which includes many urban youth-centered activities such as vaping, consuming alcohol from a 40-fluid ounce bottle placed inside a paper bag, some form of parkour wall running, and psychedelic hallucinations of floating on a cloud. I’m guessing skateboarding has become a thing of the past by now.

Of course, the fanfare does not come without its naysayers. Cries of CL being a ‘tryhard’ or coming off as ‘basic’ have been common critiques long before she began her crossover endeavors. Oddly enough, CL has been keenly aware of what her critics have to say and, in response, she inserted some form of decoding mechanism in her rap verses for us to unearth. Using Google Translate, if you translate her raps from English to Korean, then from Korean back to English, you’ll end up with a much different message. Under the pretense of this pretentious stoner jam, you’ll find there is a treasure trove of lyrics hidden right beneath the surface that answers her fans and critics alike.

I’ve used this decoding mechanism to roughly translate the song’s rap verses to uncover the hidden lyrics below.

Better run when I come cause I bring my girl Bom

Got gold on my necklace, swimming in riches

I’m back with a blast, just not a Big Bang

The first verse is directed mostly at her fans who have been wondering endlessly whether or not she’ll be leaving 2NE1 and where her career will go from here. CL wastes no time getting into the thick of it, referencing fellow 2NE1 member Park Bom’s past criminal behavior. She then takes not so subtle jabs at 2NE1 and even Big Bang, insinuating that she’s departed from her YG counterparts and is out to make it as a soloist in the US.

Tryin’ not to fake it cause I’m not that basic

Who really wrote this song, like to hear it? Here it goes

Third time up, now watch me get lifted

She gets even more daring in the second verse as she attempts to address her critics. Right off the bat, she testifies that she’s not basic and that she detests those who are tryhards. The problem is that she’s just so different from everyone else that people are having a hard time defining her, boxing her in with these labels and archetypes when, in reality, she’s something completely different. She’s like watching an installment of The Fast and the Furious franchise but without the drifting or the stunts, or anything particularly spectacular. Just a bunch of Vin Diesel one-liners.

Readers, what are your thoughts on CL’s crossover attempts so far? Do you like the original lyrics more?