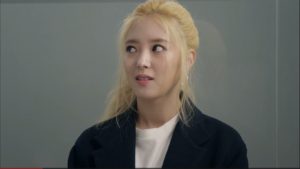 This week’s episodes of Vampire Detective remind us that we are in fact watching an episodic crime drama, with some semblance of a plot. With these two episodes, we’re already halfway through the proposed series, and yet that ever elusive plot really hasn’t advanced much at all. Don’t get me wrong — I’m still having a lot of fun watching. The actors (Lee Joon, Oh Jung-se, and Lee Se-young) and script (Yoo Young-seon) are still holding my attention, but I worry about the direction of the show. Even without a plot, it is great crime drama fun.

Both episodes five and six showcase a simple new crime our heroes need to solve, and both of those crimes are quite well scripted and thought out. In episode five, the investigators have been enlisted to watch over a popular actress who’s received a death threat. They go undercover to act as her bodyguards, something we should know only Yoon San will be good at (what with his special vampire strength and all), and attempt to discover who it is threatening her. There is a possibility it might be an old stalker who has just been released from jail after killing two innocents, presumably in order to get the attention of this actress. Backstory that will be important later; spoilers.

The camera work during their time acting as bodyguards backstage is notable. Throughout the show, there have been instances of the camera acting to show emotions or another sense to add to what we see as the audience. Previously, it has mostly been the use of a sped-up black and white filter to show what San sees when he goes full vampire. In this case, it is a similar use of the sped-up camera work to show how San keeps an eye on every little thing around them. When he’s on, he’s really on, and the camera work helps show that, flitting back and forth between people, the set, and the rest of the backstage. It’s even more important that we’ve seen the world the way he does when a piece of the set almost “accidentally” falls on the actress they’re protecting. We’re able to watch it fall as San sees it, in slow motion, as he moves quickly to save the actress’ life. This could come off as over-done, but they only use it the once so it works surprisingly well. 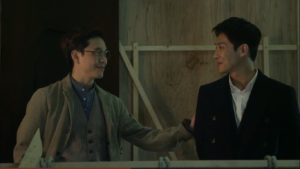 Of course, it’s clear the director and scriptwriter like to play with the overly dramatic. Shortly after that incident, San and Goo-hyung are discussing the case and trying to brainstorm who might have been the one to cause the set to fall.

San: “The culprit is right here, in this room.”

San: “You should look into that.”

Goo-hyung: “All you do is look cool…”

The resolution of this case is satisfactorily hard to determine. Though some might think it annoying how they switch between suspects — first the cheesy, sticky lead actor who is also the actress’ ex, then her sister/manager who used to be an actress herself before she gave up her dream in favor of her younger sister’s. I think it keeps the crime plot interesting since it would be much less satisfying if we were clued in from the beginning. It turns out that the sticky lead actor is really just a huge skeezeball who wants to get back with the actress, and the sister is actually trustworthy despite her possible jealousy. 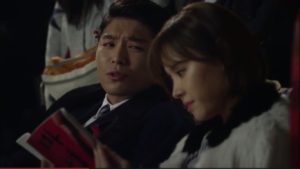 In the end, the conclusion comes full-circle from the people killed years ago by the actress’ old stalker. Her current manager turns out to be the son of one of the women killed, and he has been trying to exact his revenge misguidedly on the innocent actress since he sees her as the ultimate cause of his mother’s death. In the end, the director chooses to gloss over the final big fight scene, instead using it as exposition to explain the ultimate culprit, and the focus is less on a job well done and more on the moral problems of revenge. There is also some brief meta-commentary on the realities of being an actor or actress – that while some people may hate you horribly, ultimately you will have so many more people love you than hate you, and that is what should be focused on.

“In this world, no matter how hungry you get… there are a few things you should never eat. One of those things is hatred. Hatred not only destroys your body, but it destroys your heart. That’s why hatred is such a scary thing.”

The next episode follows a similar theme of fighting against hatred. We also are given our first real glimpse into Goo-hyung’s backstory with this episode’s crime. The case is an old one from his childhood where a classmate of his had died at school, a questionable suicide.

We’re first treated to a heartwarming reunion between Goo-hyung and his close high school friends, whom he hasn’t seen in years. They all reminisce and drink and play games, including San and Gyeo-wool. They play a version of truth and dare they used to play back in school, during which Gyeo-wool and San are dared to kiss each other. Gyeo-wool would rather drink an entire bottle of soju… which she does instead.

The game they’re playing turns out to be the one they were playing the night their classmate died, everything brought up abrubtly when a dare is drawn saying, “#3 must kill #5,” the same dare that had apparently been drawn that night. Which precipitated the classmate’s death then covered up by the story of suicide. 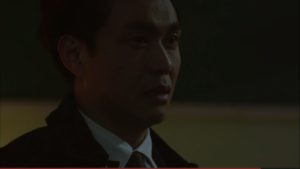 Again, the directing and camera work of this episode should be commented upon and congratulated. In order to explain the crime to us and establish who killed the classmate, they switch back and forth between that night and the present day, seamlessly sliding the camera through time and switching directly from one character in the present day to that same character years ago. As they progress through retelling the story, the emotions build in both timelines until the truth is finally brought out.

The emotions are truly the highlight of this episode, helped along by the incredibly simple plotline and the fact that the whole thing takes place in a closed room — only nine characters and one set are used for the entire episode. A spectacular device to use to build on both the emotions, the fear and uncertainty, of that night and the present day, guilt, remorse, and regret. These emotions are especially heightened for Goo-hyung since the classmate who died was his first love, who happened to have shyly confessed to him only that night. As the tension builds, it’s clear that this is something he has been holding onto for years — the question of what could have been had she lived. And the reason he has been a bachelor for so long. 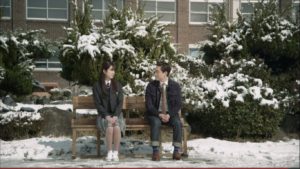 This special focus on Goo-hyung’s backstory, along with the small references we’ve had in the last few episodes in regards to Gyeo-wool, makes me hope that they are building up to a large amount of plot looming on the horizon. The most awkward parts of these two episodes were the forced reminders that, yes, in fact, there is still plot there — don’t forget about the evil vampires.

Episode five starts with a glimpse of Yoon San interrogating the jailed, as-yet-unnamed, lackey of Vampiress Yo-na, and ends with her calling San up again. Episode six starts similarly with their meeting, which quickly turns into a fight that San easily loses while Yo-na threatens him to remember his position and not try to rise up against her. We don’t get any other glimpses of her or her lackeys the entire rest of the episode.

So, while the plot may have taken a far backseat for these episodes, they were incredibly enjoyable as stand-alone crime dramas. The script was spot-on, the directing and camera work still interesting, and even the humor was still there — from the attempted kiss between Gyeo-wool and San to the preliminary stream of laughable potential clients every investigator has to deal with, showcased at the beginning of episode five, and the continuous snide and sarcastic remarks from all three of them. Every episode still manages to make me love these three main characters. While there’s nothing much to be emotionally invested in, yet, they are heartwarming and incredibly entertaining to watch. We will see if the plot manages to pick up in the next few episodes or if we can write this one off as just another episodic crime drama.