AkMu Are Silly and Delightful in "How People Move" 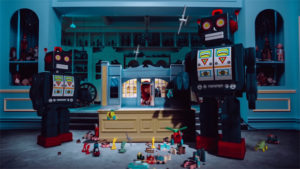 Following a two-year preparation period, AkMu have made their much-anticipated comeback with Adolescence, a mini album helmed by the title tracks “How People Move” and “Re-Bye”. The Adolescence promotions seem to be modeled closely on their debut, with the release of two MVs for contrasting title songs: in the vein of “200%”, “How People Move” is fun and lively, while like “Melted”, “Re-Bye” has a more melancholy and mature sound and theme.

If I had to use one adjective to describe AkMu and their music, it would have to be “delightful”. One of my favourite things about the pair is how they often look beyond the common theme of romantic love to sing about small, normal things in life, such as the habit of crossing one’s legs in “Don’t Cross Your Legs” and fake grass in “Artificial Grass”.

“How People Move” is similarly refreshing and cute, taking something ordinary—the way people move their bodies—and examining it from a childlike, curiosity-filled perspective:

The song takes an amusing turn, transforming into a little celebration:

I’m so glad I’m a human out of all living organisms
What if I was born as a toy?
I wouldn’t be able to move, I don’t even wanna think about it 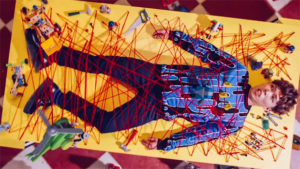 Taking its concept from the lyrics, the MV depicts the siblings as toy store owners. The story is as imaginative as the song: the toys come to life and hold a bewildered Soo-hyun and an indignant Chan-hyuk captive. The set is elaborate and kooky, with shelves of colourful robots and toy soldiers, dolls and dollhouses. There is even a set within a set in the opening scene, where Soo-hyun places a miniature cake and where she appears in after peeping through the keyhole.

That being said, the MV didn’t maximise the potential of the concept and set. The quirky kidnapping plot introduced at the beginning created expectations for narrative development, but the MV ended up comprising of more dance scenes than action ones. I absolutely do not mind watching the siblings dance and goof around for a whole MV—I thoroughly enjoyed the special video they released for “Ga Na Da Together” in honour of Hangeul Day last year. But since they had such a fascinating idea for “How People Move”, the MV could have made better, more imaginative use of the concept and the details in the set. 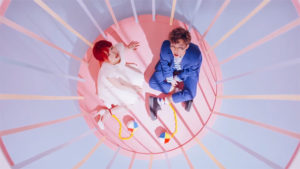 For instance, we see different types of toys, but only the robots are more active, and the others are just part of the ensemble. If they had played more varied roles according to their characteristics, it could enrich the kidnapping storyline. The MV also leaves the viewers (or at least me) with some questions: where do the many doors in that blue corridor lead? Could it have added to the story in any way? How did Chan-hyuk escape from the bird cage? And if the bars were ribbons, why couldn’t they have squeezed their way out instead of having Chan-hyuk struggle with the giant scissors? There’s comic potential in this scene, along with plenty of possibilities in other scenes, that the producers did not exploit.

Setting that aside, the dance sequences are very enjoyable thanks to how AkMu is able to overcome any self-consciousness to break out weird, adorable dance moves. At one point in the lyrics, the duo makes fun of their own lack of dancing skills:

When you feel like your familiar body is strange
Bad dancers, people with no rhythm, come together 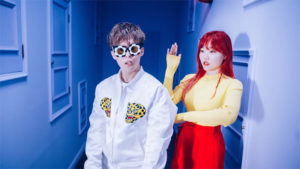 They imitate the mechanical arm movements of toy soldiers and robots, and mimic trombone-playing in the jazzy riffs. Then there are the slapstick moves, like a little dance in which they pretend to be toys slapping each other, or the kick that Soo-hyun delivers to Chan-hyuk’s butt. The non-dance scenes have no lack of the funnies either: Chan-hyuk, especially, hits the ball out of the park with his antics and expressions—his expressions are priceless when he jolts awake when the cuckoo clocks strike the hour, hammers himself on the head and mock-faints, and opens the giant scissors to free Soo-hyun.

Musically, there is a sense of disjointedness between the verses and the chorus. This diminished after a few listens, but the transition into Chan-hyuk’s rapping verse (at 2:23) still felt somewhat awkward. Nevertheless, the jazzy touches, harmonisations, and the segues into musical-style singing bring out a simple sense of wonder and fun that makes up for this. Much like the way they break out the silly dance moves, Chan-hyuk and Soo-hyun sound like they are truly enjoying themselves as they sing and rap, and their delivery gives life to the quirky theme. 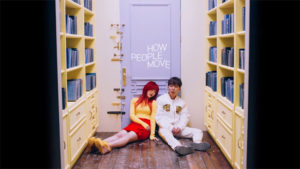 Much as I would love to hear from AkMu more often, I appreciate the time and space they are being given to produce their own music. It would be difficult for them to explore a range of topics to pen lyrics and sing about, or to try out different music styles, without a slower pace. The wait between promotion periods may be long, but you can always count on AkMu to surprise you and make you smile.

Readers, what did you think of “How People Move”? Any theories on where those doors in the corridor lead to?