Oh My Girl Revert to Cute for "Liar Liar" 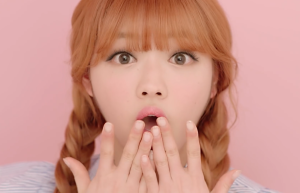 Among the slew of girl groups debuts in 2015, WM Entertainment‘s Oh My Girl was one of the few that managed to stand out with their cheery single, “Cupid.” But it was the mesmerizing choreography and dreamy melody of “Closer” that cemented Oh My Girl’s status as a rookie girl group to watch.  Now the girls are back in 2016 with their third mini album, Pink Ocean and its lead single “Liar Liar.”

With their two previous lead singles being so vastly different from one another, it was a toss up which direction the group would go next. However, once the cartoonish teasers for “Liar Liar” were released, it was clear that the girls were leaving behind the mysterious to return to the playhouse with their original cutesy style. For some, anything after “Closer” would feel like a step backwards — and that’s mainly because because “Closer” was an unanticipated mature concept for a rookie group, executed with an enchanting grace that extended beyond the group’s young age.

While “Liar Liar” delivers on the cute — perhaps even goes a little overboard — and is a catchy listen, it falls a little short of delivering an equally enjoyable visual concept. Unfortunately, the lack of concept and distinctiveness of “Liar Liar” marks a stagnation for Oh My Girl as opposed to pushing them further into the public eye.

“Liar Liar,” is overwhelmingly cute, and the vocal production of the track caters to that fact. From the aegyo-laced verses, to the “Liar Liar” hook in the chorus; everything is overrun with a playful youthfulness. In the lyrics, the members nervously pace around, second guessing their feelings and their trust in the boy they desire:

I’m a lone whale in a pink ocean

Connecting islands floating in my head

But I still don’t get it, does he love me too?

“Liar Liar” is a bit of a mixed bag. For some, listening to it will feel like they’re being scolded by an adorable five-year-old, while others may be endeared by its aegyo. For me, the weakness of “Liar Liar” comes from the track’s mix of high pitched vocals layered over already heavy instrumentation.

Even with a charming melody, the two aspects, when combined, blend into a barrage of sounds that create a perceived lack of dynamics. This factor is not helped by the business of vocals; when one member is singing, others are chanting or shouting along, and it’s all a bit overwhelming to listen to.

The only moments of reprieve from the busy vocals and instrumentation come during Mimi’s rap break and in the final seconds of the track when everything is winding down. As such, those two moments — along with the excellent pre-chorus — become my favorite bits of the song. They’re the moments when I can take a breath and actually appreciate Oh My Girl’s talents and not just their girly cuteness. 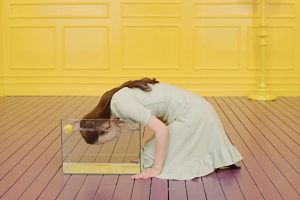 For such a busy song, the “Liar Liar” MV is remarkably sedate. On one hand, this prevents the release package from being entirely overwhelming; but on the other, it causes a discrepancy between the tone of the song and the mood of the visuals.

The MV takes the suspicion the girls hold for the boy in the lyrics, and turns it on the members themselves. The almost doll-house they all inhabit becomes a maze of secrets, sideways glances, whispers and barely-concealed suspicions.

While I very much enjoy the simultaneously catty and day-dreamy quality of the MV — and the overall aesthetics — there’s a bit too much of the same imagery for the majority of the MV that it becomes redundant. By the time that more varied shots appear of the members submerging themselves in water, and playing around together, the MV has lost steam. All the suspense that was set up in the opening frames neither builds nor finds resolution, it stagnates.

It took me a few viewings to conclude that the “Liar Liar” MV definitely could have benefited from a little choreography. There’s no dancing to break up the simple narrative of the MV, and that works to Oh My Girl’s disadvantage. Choreography was an integral part of both “Cupid” and “Closer,” and it’s one of the group’s strengths. 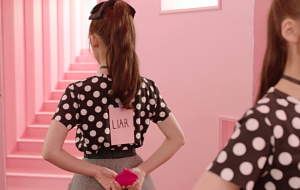 Even with editing, many of the members look awkward simply standing in front of the camera with their hands behind their backs. Every frame is a little too stagnant, both the plot and the shots lacking in movement. The song has an energy to it that the MV simply can’t, and doesn’t capture by having the members act like dolls.

“Liar Liar” is such a mixed lot: it delivers on aesthetics and aegyo, but falls short on concept and dynamics. In the end, I feel completely neutral towards it. With “Liar Liar” Oh My Girl have returned to the more run-of-the mill cute, and that’s not necessarily a bad thing — especially given the demographics of their audience and the members’ ages. But, in many ways, the release lacks anything distinctive enough to propel Oh My Girl forward from here.

Readers, how do you feel about this comeback for Oh My Girl? Do you prefer the cutesy concept?