Oh My Girl Makes a Rosy Return with "Pink Ocean" 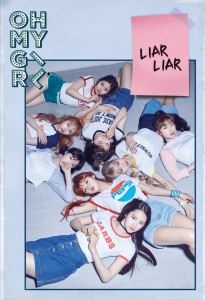 Amidst much competition, Oh My Girl has made their comeback with “Liar Liar” and mini-album Pink Ocean, their third mini-album since debut. Despite being one of the lesser known rookies of 2015, this group is one I’ve been closely following since debut, given the consistent quality of their music. And I’m not the only one – expectations for this group’s comeback were high, especially amongst international fans, given the concept of their last release, “Closer,” and the song itself both impressed in its originality and execution.

However, with “Liar Liar,” Oh My Girl chose to take a route closer to their debut song “Cupid;” that is to say, Pink Ocean is more cute and girlish, though not without the fun and catchiness that I’ve come to associate with the group. The mini-album is pervaded by a youthful first love sort of theme that approaches the subject of having a crush with a sense of innocence and tentativeness, though each song tells a slightly different tale, which, in retrospect, matches with its accompanying illustration from the highlight medley. Without further ado, let’s look into the story book that is Oh My Girl’s third mini-album.

The album starts off with “Liar Liar,” and on first listen, it’s easily identifiable as the title track of the album. Easily the loudest-sounding and most bubbly track on the album, it’s fun and full of energy, and generally a good performance piece. The high pitch and repetitive melody make it ear worm material, but parts like Mimi’s rap tone things down just enough to keep the sugar tolerable. There are also some parts remind me of their other songs – Hyojung and Seunghee’s buildup towards the chorus, the chanting, YooA’s unique voice slowing down the song at the end – that it makes me go “that’s so Oh My Girl,” which I suppose is probably a good step towards building a distinctive sound. 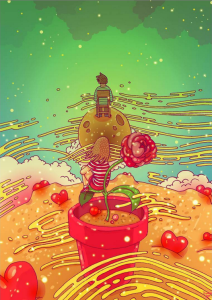 The lyrics, which talk about the mixed feelings of having a crush and hiding it, also match with the busy background instrumentals; however, on that note, the main flaw of the song is the background noise is cacophonous bordering on overpowering – by the last chorus, I can barely make out the voices of the members themselves. It actually ends up being the moments in which the instrumental is most subdued that are my favourite.

The Little Prince seems to be a popular motif in K-pop of the late – the second song on Oh My Girl’s album, “B612” is The Little Prince themed. The title of the song is named after the asteroid the prince in the story lives on, and as a result, the lyrics of the song compare the song’s narrator to the rose and her love interest to a little prince, asking him to love even “the parts of her that have thorns” and wanting “to know about worlds he has traveled,” a creative take on things.

As for the song itself, it offers us a break from the energetic nature of “Liar Liar,” and switches into an equally sweet but much slower melody. The soft voices of the members and the layered vocals in some parts give the song a dreamy quality that matches the fairy tale theme, rendering the song an overall pleasant though not particularly memorable listen. 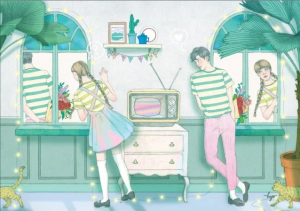 The pace of the album picks up again with “I Found Love,” and appropriately so, because the message of this song is more self-assured than the previous two. No longer is our heroine tentatively inquiring into the feelings of her crush, now she’s certain that these feelings are mutual through the way she catches him looking at her when she steals a glance, or in the way he laughs along when she does.

As for the composition, it has a lot of subtle hooks that draw the listener in, such as the rise and fall of the tune on the first two syllables of each line in the verses, and the “lalala” parts. The song is also the main vocalists’ chance to show off their vocal skills with those high note ad-libs at the end, which I’m surprised the previous two tracks didn’t have much of.

“Knock Knock” is probably the most different B-side on the album, whether it be in terms of sound or concept. Sound-wise, it’s by far the most mature song on the album, making use of the members’ lower ranges accompanied by a jazzier instrumental. Mimi’s rapping also proved to be both my largest source of both delight and disappointment when listening – delight, because it falls into place exceptionally well in this song; and disappointment, because her last verse of rap had so much potential, but after four lines of buildup and two lines of rapid-fire rapping, it dropped instantly (though fortunately not in a jarring way). 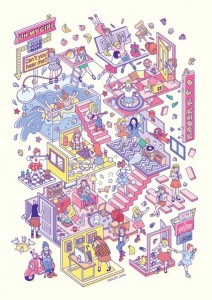 Concept-wise, this song gave us a break from the continuous love songs and instead had the narrator advising a close friend that the new girl she has befriended is no good. It’s assertive and “I’m doing this for your good” with just a hint of jealousy, which is endearing.

Finally, we arrive at the last song “One Step, Two Steps,” a pre-release of this album. The song itself is a gift from Jinyoung of B1A4, who is making a name for himself as a composer these days after writing “In the Same Place” for the Produce 101 trainees (which, interestingly enough, Seunghee recorded the guide vocals for). The two songs are definitely pretty similar style-wise – it appears that Jinyoung is a fan of a high pitch and the airy vocal effect.

However,“One Step, Two Steps” has the heart-fluttering feeling and shyness that accompanies being in the earlier stages of a relationship. While the melody and vocals are soft and sweet, the rich instrumental that accompanies gives the song it’s dynamism, which makes it an engaging listen. The effect of quiet beginning to the last chorus, the pause and then booming of instrumentals during the chorus, and the ad-libs helped the song reach what I think is the most distinctive climax of all the tracks in the album. In addition, allow me to praise the song for its well-written lyrics:

When you get one step, two steps farther away

I will take three steps toward you

So we won’t get any farther apart

When you take one step, two steps closer

I will stay right here

All in all, Pink Ocean is a pleasant and relatively solid mini. I would’ve appreciated more variety in the song choices, especially because having  four to five songs of a similar style prevents any of them from standing out, no matter what the individual quality of each one is. However, I would say Oh My Girl and their composers did very well with the concept they were given, and there are a few B-sides that are definitely worthy of multiple listens.