Matilda Borrows a Bit Too Heavily for "Macarena" 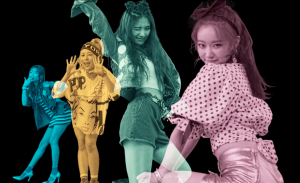 An unknown YouTube account without a user picture and only three videos to its name is almost the only information we can gleam of the new girl group, Matilda — who debuted last week with the colorful single, “Macarena.” I’d never heard of Matilda before their MV release, and I’d certainly never heard of Box Media; yet, the fledging company and it’s flagship girl group managed to capture my attention.

Most likely getting their name from the Leon craze in South Korea right now, Matilda — made up by members San-byeol, Haena, DanA and Semmi — clearly has no idea what the Macarena is, but that’s okay. The MV is cute, cheeky, and remarkably well done for a rookie group from an unknown company.

The only issue is, after watching Matilda’s debut MV for the first time, I felt like I’d seen nearly every frame of it before.

“Macarena” is an upbeat, bouncy track that makes the most of it’s harmonies. It opens with cute bum bum bum hook that instantly catches your ear and pulls you into the retro soundscape. The track blends an impressive array of styles into a single, relatively cohesive track —  most notably in the pre-choruses where rap is layered over jazzy brasses, guitars, and group harmonies. There’s a fun, big-band feel to the track that is only aided by the member’s charismatic execution of both their individual and group parts. Even a bridge that slows to half-time doesn’t kill the momentum of the track, because “Macarena” is bursting with that much energy. 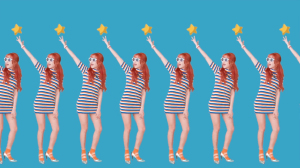 The debut track is fortunate to have such quality of production and arrangement behind its sound, because when it comes to the lyrics, “Macarena” is a confusing jumble of nonsense. The song opens with the gem, “like a Macarena, the stars are shining again,” and only gets more arbitrary from there. Honestly, the members could be singing about “Macarena” or potato salad, and it wouldn’t make a difference one way or the other. The song doesn’t care about making sense, it cares about saying “Macarena” as many times as possible in under three minutes.

I can’t fault the group too much for the lyrical shortcomings though, because it’s obvious that “Macarena” is intended to be a purely fun, energetic listen. And in that regard, Matilda and Box Media have succeeded.

Much like the track, the MV is also filled with a fun, erratic, retro imagery, and the charms of the members. The “Macarena” MV has some lovely aesthetics, but the familiarity of the imagery has me scratching my head thinking “where have I seen this before?” It’s as if Box Media took a look at the most successful girl group releases and trends of the past couple years, took bits and pieces they liked and stitched them together in a single MV and track. Yes, K-pop is notorious for recycling concepts and trends, but the “Macarena” MV takes it to a whole other level.

There’s a lot of Red Velvet-esque aesthetics — from the sweatshirt and skirt stylings of “Ice Cream Cake” to the “Happiness” and “Dumb Dumb” style pop-art multiples of each member. Box Media also added an IU “Twenty-three” reference — and I swear I saw the album cover to MBLAQ‘s “Smokey Girl” at some point in the three minute MV. 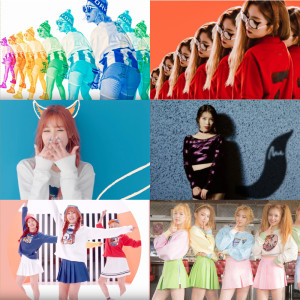 ox Media has made somewhat appropriate choices of aesthetic adaptations. Indeed, “Macarena” sounds like the potential love child of a Mamamoo and Red Velvet single. So the aesthetics, in that way, are fitting; they reference concepts that have already worked, and that the audience will find familiar and pleasing with the track. However, blatantly borrowing from a group that already has such a well-cemented aesthetic — like Red Velvet — makes for problems in terms of making the rookie girl group stand out in their own right.

Nothing is inherently wrong with adopting stylistic choices that have already been successful in the K-pop market to compliment a song. Furthermore, none of this is to say that a little aesthetic borrowing makes for a bad — or “plagiarized” — debut, because it doesn’t.  The song is catchy, the members are charming, and the aesthetics work with the single. The debut’s weakness falls in the fact that Box Media took it a little too far to the point where the MV isn’t making me think about the new girl group Matilda, it’s making me think I ether need to reacquaint myself with the real Macarena or go re-watch some Red Velvet MVs (which is exactly what I did after my second viewing). Even the bum bum bums in the track eventually transitioned into dumb dumb dumbs in my mind.

With a decent enough debut track like “Macarena,” Matilda has sufficient potential to grow and flourish in the industry. Most of my qualms with the group’s debut are purely aesthetic — which are easy to fix. So, here’s to hoping that if we see more of Matilda, they’ll bring something more original to the table in their next MV.