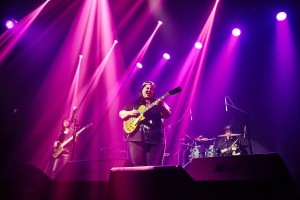 A-Fuzz (에이퍼즈) is an all female quartet that plays mostly instrumental-driven music. They have a commanding stage presence and are an absolute whirlwind of sound during their live performances. They describe their sound as being fusion jazz played like funk music, and this manifests itself in the sensibilities of their songs.

The members of A-Fuzz include Jinny Kim on guitar, Seulki Song on keys, Sunmi Shin on drums, and Hyemin Lim on bass. Of particualr note are Jinny Kim and Seulki Song who were both acclaimed by media outlets for their respective positions, the guitar and keyboard respectively. Jinny Kim plays passionately and puts her whole body into getting some great licks out of her guitar. Seulki Song is nimble and pulls out a wonderful medley of notes from her keyboard.

The band released their first mini album Fading Light in March 2015. “Fading Lights” off of that EP shows off the group’s sound in a low key matter. They play with rhythms and melodies and it is mesmerizing. Throughout the song, there are some vocoder and keyboard elements that simulate a vocal inflection, but there isn’t a lyrical part that pervades. It’s all about the words behind their playing, and A-Fuzz bring all the elements of writing together in their instruments, adding twists and sprigs of wordplay in the notes of their song, progressing their tracks with a depth of energy.

On their website, it is written that A-Fuzz is an “instrumental band, no vocal, trying to collaborate with other musician[s] to the other format.” One such collaboration done on Monday Project with Julia Dream was a cover of Stevie Wonder’s “Higher Ground.” So, while they aren’t doing the vocals — they left that to Julia Dream’s Junhyung — they don’t need to in order to stand out. The one stealing the show during this performance — in my eyes — is A-Fuzz’s Jinny Kim. This girl knows how to play and she puts her whole being into it wile she’s on stage. She bobs her head and displays a keen sense of showmanship, which contributes to a funk-laden, energy-filled cover of the classic.

As mentioned before,  A-Fuzz is an instrumental band; when they do include vocals, it’s often processed through vocoder and amplifiers to function as another instrumental element. In “Moonshine” off the same titled second mini album, the vocals are more pronounced, but they never overtake the track. When the lyrics come in, they give off a displacing intensity, a hazy feeling of bewilderment which coincides with the tone of the track.

Lastly, consider “Scene #1” from their first EP as a great example of the depth in A-Fuzz’s music and how well the band synthesizes their sound. This performance taken from their On Stage performance shows how in tune to their music they are. The band is skilled and plays off each other’s energies. They continually escalate their sound into this crescendo-infused buildup that is just gratifying to watch and listen to. Also worth noting are Sunmi Shin and Hyemin Lim who kill it on the drums and bass respectively. They have a fine grasp on the rules of the game and tweak certain riffs and pieces to give their music intriguing layers of complexity.

A-Fuzz is a special rarity in the music scene with their fusion jazz sound. They have fantastic control over their craft. Their mastery over each instrument comes together in this rhythmic way that is incredibly moving. These women have a special synergy that doesn’t need vocals to convey what they’re feeling; instead, what they display with their tools in their hands is an art that should be lauded and experienced. A-Fuzz is a band to look out for, and they continue to make strides and a name for themselves with each successive release.