Descendants of the Sun, Episodes 1-2: A Lot to Look Forward to 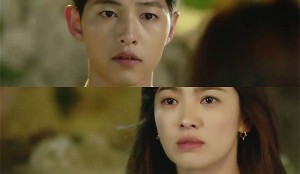 The much-awaited KBS drama Descendants of the Sun finally descended upon us mere mortals last February 24 and immediatel,y it was able to score high in the ratings department by beating out its competition with twice the ratings. Unlike the usual method of shooting a drama’s episodes continuously while it is being aired, Descendants of the Sun was entirely pre-produced (and had only wrapped up filming last December 30), hence the justifiably high anticipation for this drama. Add to that the fact that two of Hallyu’s most attractive and seasoned actors will be playing the lead roles — and let’s not forget that Shinee’s Onew would also be appearing on the show as a side character — the drama has had high expectations.

Written by the famous Kim Eun-Sook — the same writer behind hit dramas like Lovers in Paris, Secret Garden, and most recently The Heirs — Descendants of the Sun definitely feels like it could be the very drama that could redeem Kim Eun-Sook from the mess that was The Heirs. Plot-wise, Descendants holds a lot of promise by combining the thrill of a war drama and the slice-of-life feel of a medical drama. By trading in school uniforms and campy teenage romance cliches to military camo gear and surgical gowns, Descendants feels like a more intriguing and mature drama that adequately re-introduces fans of Eun-Sook’s writing to her signature K-drama flair. 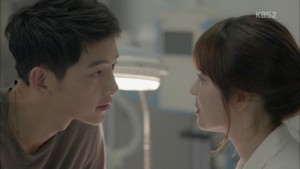 From the get-go, the series shows us the intense and unpredictable military life of Captain Yoo Shi-Jin (Song Joong-Ki) who is a member of the UN Peacekeeping troops and the highly stressful medical world of surgeon Kang Mo-Yeon (Song Hye-Kyo). The first episode does an excellent job of creating an adequate narrative exposition for the characters without giving too much away. An example of this would be how Jin Goo’s character Captain Seo Dae-Young, who is comrades with Captain Shi-Jin, was made out to be a rough and tough army dude with a “dark past.” Yet he is also a man with a soft spot and someone who still experiences romantic problems of his own.

Although each episode was nearly an hour long, there were hardly any parts that felt drawn out or unnecessary. Each scene and sequence — albeit some rather cheesy dialogue — took its time to reveal to the audiences the different yet parallel lives which the main characters lead. When Captain Shi-Jin was deployed to Afghanistan to carry out a mission while Dr. Mo-Yeon had to perform a rather intense surgery was a highly effective scene since it perfectly lays out that although these two people come from contrasting fields, they do share some similarities in the nature of their work.

Amidst all of this, the story still manages to humanize the characters. Dr. Mo-Yeon’s drive and passion is unmistakably well-written in the narrative, and the plot point that fleshes out the corruption in the hospital was appropriately placed. With relations to this, it also sheds further light on how women, despite all their credentials and capabilities, can still be oppressed and discriminated against, whether outright or insidiously through such corruption schemes.

Eun-Sook’s writing for Descendants continues to impress even during the scenes when it was just begging for an over-the-top, K-drama cliche. When Captain Shi-Jin and Dr. Mo-Yeon decided to call it quits after two failed dates (what can you expect when one person is an on-call doctor and the other one is an active soldier?), their own personal beliefs and principles were revealed and it makes for an interesting set-up for what the fans and audiences can expect from how their characters will react and behave in the episodes to come. 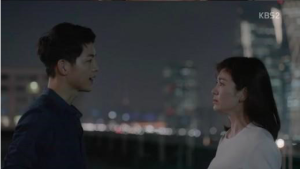 Characterization and plot aside, the cinematography and editing for this drama definitely lived up to the hype of being a pre-produced series. The shots are clean and crisp and although the action sequences are a bit awkward at times, they are still able to add in an adequate amount of thrill that one would expect in a drama that mixes war and conflict.

Despite how the series attempts to shy away from the very obvious, standard forms of K-drama cliches, it occasionally still incorporates some of those formulaic K-drama aspects such as the occasionally cheesy slo-mo/repetitive shots — usually to add more of a drama and thrill factor — and the way it lacks the sense of grit that one would somehow expect watching a war drama/medical drama. Instead, it still has that ‘too pretty/perfect’ glossy appeal to it that only a K-drama can pull off. From the supposedly over-worked and exhausted doctors of the fictional Haesung Hospital to Captain Shi-Jin and his squadron, everyone looks too primped and neat. It is a bit unnerving considering how just a tiny amount of grit could have made the narrative a lot more compelling. 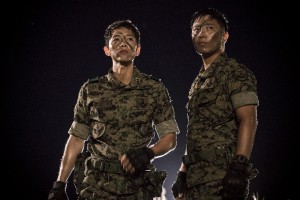 While everything about Descendants is generally a plus at this point, one can’t help but feel like it might be headed down the tragic road of becoming just another war drama. You have your exotic, Eurasian setting in which majority of the series plays out, outward and sometimes unnecessary displays of toxic machismo, and, of course, soldier-hero complex. It is because of this that the fear that Descendants might unconsciously end up antagonizing certain races or creeds is ever looming especially when the very nature of the focal conflict of the series would be all-too trivialized for the sake of uplifting the romance and hero complex plot points of the series.

Essentially, Descendants of the Sun is off to a good start. With well-written characters devoid of blatantly annoying, nuisance archetypes and with themes on war and peace that are all the more relevant today, it is definitely meeting and even going beyond what has been expected of it. A 16-episode drama, Descendants has 14 more episodes to continuously live up to its hype of perfectly balancing out the thrill of war and romance.