Signal, Episodes 3-6: Where Are We Going? 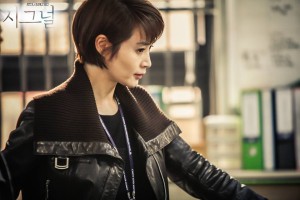 If the past six episodes of Signal have taught our characters anything, it would be that no matter what you do to change the past, the outcome is almost never better. It will be different, oh yes, but better? Perhaps not.

Is it even possible to fix the future by changing the past? That, for sure, has not been what the show has been saying thus far, and this is one of my greatest gripes about Signal.

Which brings us to the biggest turn of events so far: did Detective Cha Soo-hyun (Kim Hye-soo) just . . . die?

Oh yes, she did. Before I can even begin to fathom how ridiculous it would be for the female lead to die six episodes into the series, though, I remember that this is a show about communication between the past and present. So obviously, our heroes are going to set it right by changing the past so that Detective Cha would not have died in the present. Right?

Maybe because we are less than halfway through the series, but Signal feels a little directionless. The only thread tying the episodes together so far is the fact that Lieutenant Park Hae-young (Lee Je-hoon) and Detective Lee Jae-han (Jo Jin-woong) are communicating through time. We know that all these different cases are eventually going to lead us to solving the mystery of Detective Lee’s disappearance, this much is clear. But the show still remains somewhat scattered and feels rather episodic, particularly because we are  presented with new cases every so often and the cases don’t really seem to have much in common other than the fact that they were all handled by Detective Lee.

Another peeve I have about this show is the seeming lack of character development. We had gotten off a strong start with the first episode launching us straight into the heart of the action. In the second episode, we had gotten a sense of things slowing down with the introduction of the cold case team. But six episodes later, why do I still feel like we don’t really know the characters?

We’ve had glimpses into Detective Cha’s past as a young rookie policewoman and how Detective Lee had had an impact on her. We’ve also been given tidbits as to why our resident profiler Lieutenant Park hates the police so much, despite being a policeman himself. But what about the other members of the team?

I want to know, will Detective Kim Gye-chul (Kim Won-hae) continue with his lackadaisical, negative attitude? Is Detective Jung Hun-gi (Lee Yoo-jun) going to remain one-dimensional — the quiet, almost random member of the team who works forensics? These characters are a team; there needs to be more of an indication that they are actually going to care about one another beyond their professional capacities. Plus, I want to feel like I actually care about them too. I may be jumping the gun and being too impatient because we are only up to episode six, but then again, we are already in episode six of a total sixteen.

Grievances aside, however, credit must be given where it is due. There is no doubt that the acting in the show has been stellar. There has been no dearth of tear-jerkers throughout the episodes. Be it Detective Lee’s guilt in arresting the wrong man, Oh Kyung-tae’s (Jung Suk-yong) loss of his daughter, or even Eun-ji’s (Park Si-Eun) insistence that her father was innocent – having tissues at hand came in handy. What really takes the cake though, is the perpetual sense of helplessness that pervades the storylines, particularly between our two heroes as they struggle to decide how much change they can effect with this beautiful curse of being able to communicate through time.

Another commendable and rather unconventional aspect of Signal lies in the fact that there doesn’t seem to be much of a love-line subplot at all – at least not in the present timeline anyway.

We know that Detective Cha has been in love with Detective Lee, but whether or not it had been reciprocated still remains to be seen. As such, there seems to have been a deliberate avoidance of any love-lines at all, allowing for the focus to remain solely on the time-travel communication and on exposing the underlying corruption within the police force that has transcended the boundaries of time.

So far, the pull of Signal lies heavily in its unique premise. Solid acting has been able to keep audiences coming back, as seen from its stable ratings thus far. However, I truly hope that the plot picks up from here on, particularly with respect to the interweaving of sub-plots and the interaction and growth of characters in relation to one another. It could, perhaps, be helpful if the plot could also tone down on its episodic-ness and have their characters from previous crimes have some kind of connection with one another. Only when these elements are well-integrated can the entire show come together and present a waterproof, coherent narrative.

Nevertheless, I’m not giving up on Signal just yet. Fingers crossed that its trajectory from here on will be upwards.