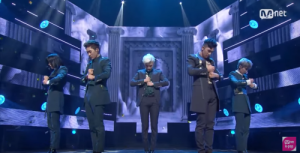 NU’EST is finally back, after 18 months, with their latest Korean EP, Q is. Having debuted in 2012, the 5-member boyband had chosen to focus on their overseas promotions since 2013, with releases in both Japan and China. In that time, the members have also ventured into other areas of entertainment with Aron taking up various DJ positions at Arirang and SBS PopAsia, and Min-hyun dabbling in acting. With their latest comeback title track “Overcome,” the group marks their return to the Korean market, imploring their lover to remember that they will always be by her side no matter what.

The song starts off mildly, with a soft rock beat complementing Min-hyun’s vocals. The beat quickly picks up in the pre-chorus with Ren and Aron, however, with synths creating a rhythmic syncopation that lead up to the hook. The chorus explodes with Baek-ho’s powerful, slightly raw vocals, backed up by a strong bass beat and more synthesizers, making for a rather addictive refrain, albeit electronic-sounding.

During the second verse, “Overcome” segues smoothly into two lines of softer music that sound more like an afterthought to the chorus than a verse. The music then rapidly picks up again with the pre-chorus before bouncing straight back into the chorus, giving the listener no chance to get down from the high of the previous chorus.

Receiving the baton thereafter is JR, whose raspy rapping reminds his lover once again that she is all that fills his mind before Min-hyun leaves us with his final evocation of love that his lover is all he needs.

Everything in the world reminds me of you; I must be charmed

The music itself takes a few listens before growing on the listener. Upon subsequent listens, the music does stand for its own appeal. The unique lack of a clear-cut verse-chorus structure gives the music a sense of continuity that is not necessarily present in other songs. At the same time, the chorus also makes up for its commonplace instrumentation by highlighting Baek-ho’s husky, robust voice.

But at first listen, “Overcome” fails at exceeding any expectations, leaving the audience with an overwhelming sense of average-ness. The conventional use of synths and base without any surprises nor particularly memorable musical moments leaves the music sounding run-of-the-mill and rather characterless. It is very apparent that the music has chosen to run with the conventions of K-pop as a genre, failing to offer anything fresh.

In terms of the music video, there is a similar lack of novelty. There is a rough storyline, but when interspersed with the choreography, it becomes clear that the music video is not looking to venture into any new ground, sticking close to the conventions of K-pop music videos.

Thematically, the MV strings together a coherent four minutes, ensuring that factors such as its colour scheme, backdrop and lighting choices are all aligned in order to achieve its intended effect. With the focus on the members as knights in shining armour, the MV takes on a generally gloomier palette, with a smattering of brighter past scenes juxtaposed against the drab present, signifying the trials that NU’EST has to overcome in order to return to the happiness of the past.

Confusing at first glance, the MV comes together and starts to make sense somewhere towards the later part of the video. What appears to be an unknown force had hurled NU’EST’s lover through the window while the boys try to catch her before she falls through the window to no avail. This unknown force is apparently, according to the lyrics, some kind of emotional trauma that has resulted in their lover spiraling into the depths of sadness.

Even if the dark thorns scratch and hurt me

It is from this emotional pit that NU’EST tries to save her from — and their efforts are proven through scenes of the members trudging tirelessly through blizzards and enduring lonely nights by the fire in the wilderness. Symbolic of the difficulties that NU’EST is “overcoming” in their bid to make their lover happy once more, the video succinctly puts the lyrics into motion.

This emotional hurt that NU’EST is trying to save their girl from is also further portrayed through the use of a glass wall behind which she stands — a symbol of the walls that she has built around her heart and which NU’EST has to overcome in order to reach her. It is also portrayed through the wrecked state of the room that NU’EST walks through — the once bright and beautiful room representing the state of her heart, now dark and dilapidated.

And as NU’EST continues on their arduous journey in search of their lover’s happiness, they continually battle ordeals, with Min-hyun almost collapsing from the cold. Coming to a long, red stairway that appears to lead to heaven, Min-hyun climbs it courageously and is rewarded with his queen seated upon an ice throne — he has finally overcome everything that stood in between them.

At first glance, the video — like the song — fails to make a stellar impression. There is nothing much to the video that makes it stand out from the myriad of K-pop videos that grace the internet. Upon closer inspection, however, credit must be given to NU’EST in the thought put into the symbolism and thematic representations within the MV, which no doubt played an important role in pulling together a otherwise scattered MV.

Nevertheless, NU’EST’s comeback can be characterized by conventionality, contrary to its title. Both in terms of the music as well as the music video, NU’EST makes it clear that they are not about to challenge any boundaries of the genre just yet, even as they do show signs of maturity and growth in their vocals. This is slightly disappointing given the anticipation of their fans who have been waiting since 2014. With a comeback like this, NU’EST only manages to continue on their streak of average.