Men in the Kitchen: From TV Screens to Korean Kitchens 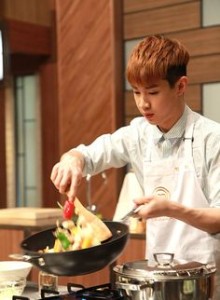 Everyone’s a foodie these days: a quick scroll through Instagram shows this, with homemade pastas and expensive brunches dominating many people’s feeds. This worldwide food trend has become the subject of many Korean variety shows, with chefs becoming celebrities and idols eagerly participating in cooking shows, or “cookbang,” to ride the wave of the trend.

For South Korea, food variety shows are especially popular due to the country’s focus on food as an important part of their culture, one that bonds people together. The cultural importance of food and the voyeuristic enjoyment of watching people cook and eat has made cookbang programmes the trendiest category on television. Idols have long tapped into this culturally significant part of life by regularly posting about food to appeal to fans, and are now increasingly gaining popularity by participating in cooking variety shows. Variety shows will often delve into idols’ fridges, show the snacks that idols hide in their bedrooms, and show idols feasting on meals together or cooking for each other. Clearly, audiences gain a vital connection to idols via the medium of food. 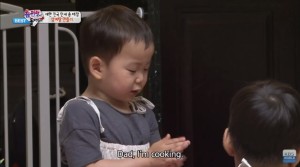 Celebrity chefs and idols demonstrate their talents or teach others on shows like Please Take Care of My Refrigerator, Mr Baek the Homemade Food Master and Three Meals a Day — with the latter featuring 2pm’s Ok Taecyeon and actor Lee Seo-jin. Idols also try their hand at cooking on variety shows, seen through Song Il-Gook teaching his sons how to cook, Exo attempting to barbeque meat, or idols teaching their fans classic Korean recipes.

With cooking being heavily glamourised by chefs such as Choi Hyuk-seok, many men are eagerly taking up the skill. A cookbang enthusiast was quoted in SBS Australia’s Dateline as saying “There’s an image now that men who cook are cool. Women think that too, so to appeal to the ladies, men want to show off their skills.”

At present, Korean men do an average of 21 minutes of chores a day: the least amount in the developed world. Cooking classes like the Happy Men Cooking Class, however, are aiming to change that. Attendance at cooking classes for men have skyrocketed, with many of the participants being middle-aged men who are increasingly abandoning the old perception that women should always have a meal ready for their husbands. While some attendees are motivated by a desire to impress women with a mean bulgogi or bibimbap, others genuinely want to do more chores.

Many cite specific variety shows as inspiration for their newfound interest in cooking, such as Mr Baek the Homemade Food Master where Baek Jong-won teaches men who know nothing about cooking, thereby providing a relatable starting point for many men. 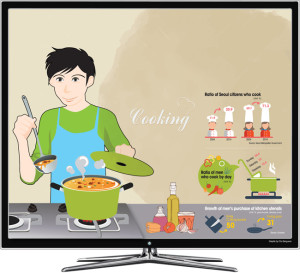 As well as increasing participation in cooking classes, cooking equipment is also flying off the shelves. Lotte Mart has noted a 72% increase in the number of woks sold and 63% increase in the sale of kitchen utensils from 2014-15, attributing this to the greater interest in cooking. The Seoul Metropolitan Government also found in its 2015 survey that 20.9% of male respondents spent at least 10 minutes a day cooking – a significant increase from 2004’s 11.9%, while females reported an increase of 4%.

The growing interest in cooking is also linked to the cultural importance of food, with one attendee of the Happy Men Cooking Class saying that “Cooking is not about hierarchy. It is a relationship with others. It is also a great opportunity for networking with men too.” Previously, this participant described himself as an authoritarian father, saying “I wanted to change. Taking cooking classes here was the turning point.” Essentially, food boils down to strengthening relationships, and men are increasingly wanting to participate in the creation of these bonds within their families and among friends.

The cookbang trend also allows people to indulge in the fantasy that they can become part of the idealised domestic lives they see on television. Seeing wealthy celebrity chefs put together meals with only a handful of ingredients allows everyone to recreate the magic at home and thereby experience that lifestyle. Like many other popular variety shows, cookbang shows also allow Koreans to indulge in their voyeuristic side. 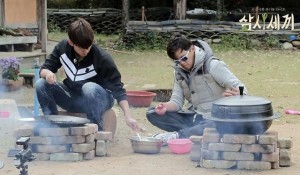 Cooking clubs have also increased in popularity, with male group members cooking together and then inviting their wives to try the food. One such organiser, Go Dong-rok, believes in the power of cooking to shift gender roles: “Korean society is paternalistic and just because they work during the day, husbands want to be served by their wives. But cooking can soften this.”

However, this love of cooking is essentially just a trend, and all trends have an expiry date. When cookbang is replaced by a new TV trend, will men still find it cool to cook for themselves or their families? Also, even if people’s attitudes to gender roles change, the practical realities of their lives must also change for these ideals to be put into action. Unless working hours are reduced and more paternal leave is given, both men and women will struggle to balance their work and home lives. For now, we can look optimistically at the increased participation of men in the kitchen thanks to the cookbang trend, and perhaps try to cook a few recipes ourselves.