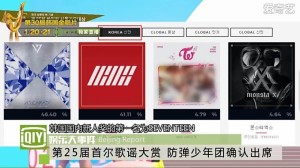 As you may have heard, Twice‘s Tzuyu found herself in a major controversy over an issue of whether she was pro-independence for Taiwan or not. Tzuyu’s non-political — but ultimately politicized — Taiwan flag incident, and, especially, the fallout from misunderstandings regarding Tzuyu not vocally declaring her support for One China got out of hand over the span of a few days.

Since Pat’s last article explaining China-Taiwan relations and the historical background behind this issue, there have finally been some statements made on the JYP Entertainment side. The fallout of the scandal has had major effects on JYPE’s activities and operations in China and other events sponsored by major Chinese companies (re: Seoul Music Awards).

While the major witch hunt was something that went over on the internet side of things, very real repercussions have hit JYP Entertainment (and subsequently Tzuyu and Twice) in waves. Including termination of commercial contracts with Huawei and LG, Twice have also been edited out of the Beijing Spring Festival Gala and have not been included in the Anhui Spring Festival Gala, which they were initially invited to attend. In addition, their music and videos have been removed from Chinese music outlets Kuwo and Kugou.

In addition to Twice and Tzuyu being affected, Jackson from Got7 has had his own share of consequences. He’s faced criticisms about his handling of stating that he’s from China and Tzuyu’s from Taipei & Taiwan-China on A Look At Myself — although he seemed to handle that situation diplomatically, in my eyes. Subsequently, he’s had his appearances in Day Day Up delayed. 2PM‘s Nichkhun cancelled his activities, and 2pm followed suit by announcing cancelled Chinese activities soon afterwards. JYP noted that considering the major reactions in China, it would be better to not pursue activities at the moment.

JYP Entertainment has since made a first and second statement, Tzuyu made a YouTube video apologizing, and Park Jin-young himself posted an apology on Weibo (full translated statements are linked below respectively). 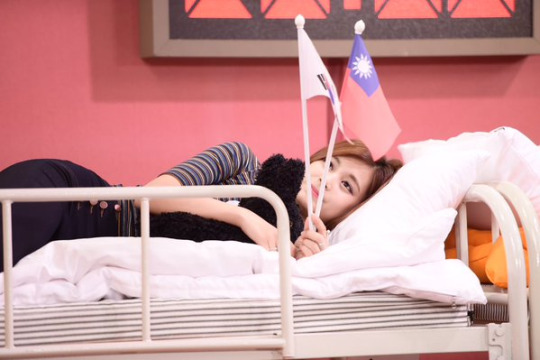 “Recently, the internet ran rife with unpleasant news about Tzuyu. I apologize for this.

We, as an entertainment company, have always kept good relationships between Korea & China. The company (including Tzuyu) have never discussed anything related to China politics.”

I was genuinely surprised by JYPE’s first statement. They probably sat on it for a moment hoping the fervor would die down but the company made a well thought-out response after realizing things only kept escalating. JYPE made a reasoned statement, once again pointing out that the company nor Tzuyu have made any political statements whatsoever.

Who knows how this statement alone would have fared? It doesn’t really give in to either side and for those calling on Tzuyu to choose a side, it doesn’t satisfy their whim. Unfortunately, as you can guess from the continual string of repercussions, JYP caved in to further demands. JYP Entertainment’s stock value was falling (although how much of this is attributed to the China-Taiwan blow up is debatable), the incident was burning up  on Weibo (with anti-JYPE sentiments being expressed), and push back from Chinese promoters.

“1. The company and Tzuyu supports the One China principle. Taiwan is Tzuyu’s hometown, and feels for Taiwan, but that doesn’t mean she’s a Taiwan independence supporter. Chou Tzuyu has never spoken of anything related to Taiwan independence, so the rumors on the Internet are untrue.

2. We fully encourage a healthy relationship between Korea & China, and we respect the One China principle, and we will never allow anyone from the company to hurt this relationship.”

The second statement clarifies that JYP Entertainment and Tzuyu support the One China Policy and respect it, in regards to the relationship between Korea and China. It’s probably the statement he should have given at first in attempts to quell the PRC netizen rage. It does seem like JYP Entertainment are wary of furthering any cross-country — between China and Korea — tensions, sparked by any hint of pro-Taiwan independence talk.

[youtube www.youtube.com/watch?v=t57URqSp5Ew] It’s heartbreaking to see Tzuyu bow her head and apologize here. For things to intensify to this point, I honestly don’t even know if her apologizing like this will even make anyone satisfied. It’s depressing to see her look physically dejected and having to read from a script, lest her words get taken out of context. She is 16. She didn’t want to make a political statement, but now here she is having to state that “there is only One China, the two Straits are one. I will always be a China Chinese.” Far be it that she has to show humility in her admission of guilt — of what she’s specifically guilty of I’m still unsure of — but she also has to deal with bearing responsibility for all the negative impact dealt to her group members and company. 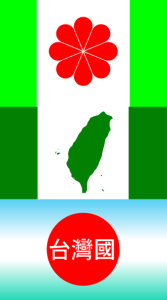 Side note, one of our commentators and former writer Patricia pointed out in her comment on our previous article about this incident, the flag that Tzuyu was holding isn’t even considered a flag that is pro Taiwanese independence. Of the many other proposed independence flags (see: on the right), pro Taiwanese independence supporters don’t really consider the ROC flag (see: flag Tzuyu is actually holding) as one they would use since it was designed and commonly associated with the Kuomintang.

“Over the past few days, Tzuyu felt a lot and has been reflecting. She left her hometown when she was 13, came to Korea, and it’s my company and my fault for not teaching her well on behalf of her parents. We will be stopping all of Tzuyu’s China activities for now and we will make proper follow-up arrangements with the partners that are affected from this incident.”

Furthermore, JYP himself felt the need to make a personal apology as well. I respect that JYP is trying his best to appease everyone and to calm the flames. Pretty much acquiescing to the ‘hurt’ felt by Chinese netizens who have misguided anger towards Tzuyu and JYP Entertainment.

Lingering repercussions and what gets politicized?

The reaction is one of a drawn out historical and political wedge that is further fortified by an idea of legitimacy. This situation has grown as its flames are fanned by both sides. On the Taiwan side, rival politicians of the Democratic Progressive Party (DPP), Kuomintang (KMT), and People First Party (PFP) have co-opted this viral news during a time (Jan 16) when Taiwan is holding their general elections. They recognized that there was support for Tzuyu in Taiwan because of her youth; so candidates from each side have displayed their support for the young 16 year old. Even the Taiwanese President made a statement of support for Tzuyu, calling for calm. 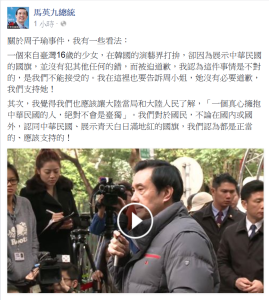 This misguided flurry of anger has only hoisted responsibility on the shoulders of Tzuyu. While you can be politically active below voting age, Tzuyu, in this case, was not trying to be. In Taiwan, you have to be 20 to vote (though there are calls for voting age to be lowered). Even in China, you have to be at least 18 to vote. Hence Tzuyu, who isn’t vocally engaged in any political movement – she has been training with JYP since she was 13 –, shouldn’t bear this burden; nor should she have to make a political statement that could either bar herself and JYPE from China or make her an outcast among pro-independence Taiwanese in Taiwan.

Some people want to keep their political ideologies to themselves, but this incident has just forced Tzuyu’s hand in proclaiming which side of the binary she has to lie on: us or them, One China or pro independence. Any signs of pro-Taiwan independence is think-speak. It’s unacceptable and culpable to complete blacklisting. And this isn’t some undercover blacklisting of artists that have left your company; this is the full on sponsors dropped, album covers blurred type of censorship. It is this utter denouncement of anything even utterly capable of being against the predominant discourse that renders this dispute — over her seemingly innocent actions — as something inflammatory and unacceptable.

Given the extent of this event, it really brings to question how fiercely a perceived opinion can spark outrage. Why hold every individual’s political views up on a pedestal and then critique them? Why force her to take a side and voice an opinion on a topic she’s pretty much stayed quiet about? And furthermore, the reactions don’t even allow open dialogue because of how ferociously things got out of hand.

Now that Tzuyu has made her apology, I don’t know what else the enraged group of netizens will want from her or JYP Entertainment. And conversely, under such duress, things continue to pile on the 16 year old’s shoulders from the both sides.
Many people from Taiwan have changed their profile pictures on popular social media outlets such as Facebook to state that they will not apologize for being Taiwanese. Not giving Tzuyu any time to breathe after her apology, Taiwanese entertainment company Juksy has also offered to buy out Tzuyu’s contract and launch her career in Taiwan. 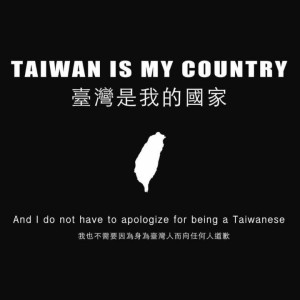 In China, the netizen reaction seems to already be set with some high profile responses such as from actor Lin Gengxin who posted a mocking comment about her apology. She’s being barraged from all sides and the incident continues to snowball even after attempts from the JYPE side to combat the flames.

What started as innocuous flag waving and introductions of her from China-Taiwan, has been exacerbated by Huang An who spread malicious rumors that she was a pro-Independence supporter — even though she didn’t make any political statements — and has now become a serious issue for JYP Entertainment in different regions in Asia. Even Western Media outlets (such as Daily Mail and ABC News) have been on this issue with the AFP Wire picking up the story. JYPE and Tzuyu are stuck between a rock and a hard place, and there is just no satisfying everyone in this case.

At the end of the day, no one is denying that One China isn’t an important issue to both China and Taiwan. It is just ridiculous that they are tearing apart this sixteen year old girl who did not make any political statements. Sadly, the real repercussions for Tzuyu will include emotional trauma and a fear of words and actions related to her birthplace being taken out of context and used as fuel for damaging her reputation and career prospects in the future. Her mom is reportedly traveling to Korea right now, and while it will be good for Tzuyu to have family near her, the damage to her has already been done. Hopefully, she will find a way to be okay after the dust settles.

Update: Newly elected Taiwan President Tsai Ing-wen references the hullabaloo behind the Tzuyu apology in stating “This has offended and hurt the feelings of the people of Taiwan. Everyone should unite to voice their belief to the world that no national of the Republic of China should be [attacked] for identifying with her country.” Also, both Tsai Ing-wen and Tzuyu’s name have started to be censored on popular Chinese site Weibo.

For Your Viewing Pleasure: Earrings Glamour

For Your Viewing Pleasure: Seasonal Swing 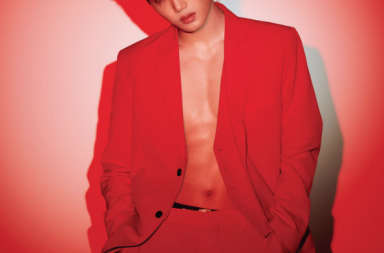 Innocence and Guilt in “Nunbal”