A Pink made its third stop in the North American leg of the Pink Memory Tour in San Francisco on January 8th. In front of a couple hundred fans, the six-member girl group entertained the crowd for a good two hours by performing many of their hit songs while interjecting plenty of talking and variety segments. In essence, it was more or less what I expected: the girls charmed the crowd with their bubbly personalities and kept us on our feet with their song and dance numbers. However, I couldn’t help but notice a few aspects about the group that I never realized before, some of which surprised be for better or for worse.

Below are a few assumptions that I feel many people have about the group that I’ve come to realize are just completely, or just somewhat, untrue. Thus, I will argue each case using the anecdotal details I observed throughout the concert. 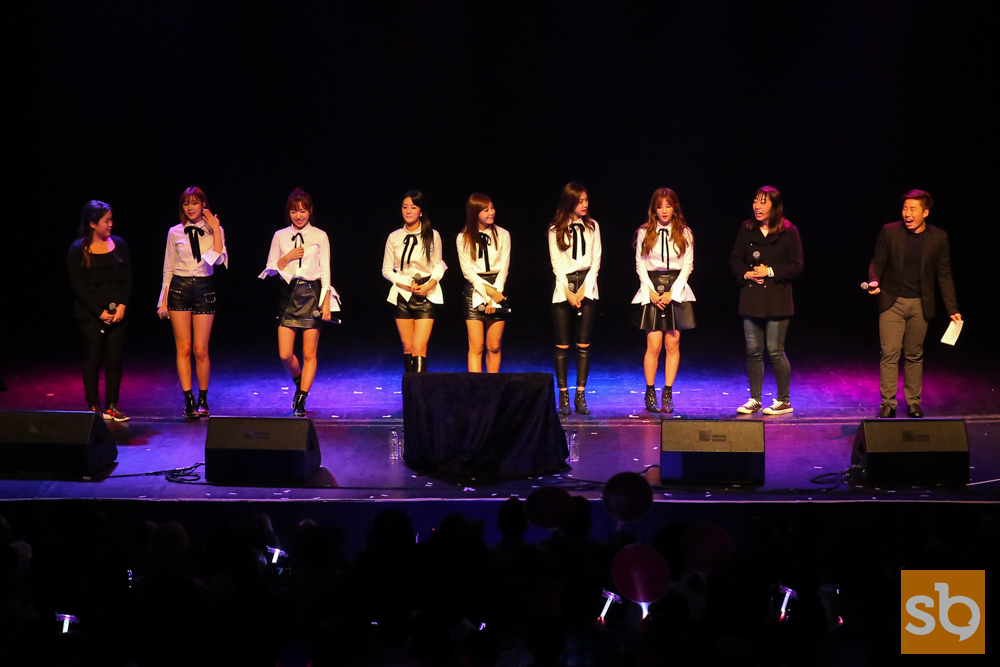 It’s no secret that innocence-oriented girl groups attract uncle fans like flies to a zapper and that these older male fans with heavier wallets fuel a good portion of the girl group industry. SNSD is a prime example of how a girl group can ride the uncle fan train and turn it into permanent stardo. Given A Pink’s conceptual similarities to their industry sunbaes, I imagined that a sea of ahjussis would be littering the crowd after work on a Friday night.

But in actuality, that was far from the truth. The largest demographic in the crowd that night, as is the case at any idol event, was teenage girls. But unlike a concert with male idols, such as the Blockbuster tour that rolled into town a few months back, the crowd was not completely plastered with estrogen-induced screams. Instead, the audience was very much infiltrated with a testosterone-induced roar as many young male fans also peppered the crowd. Overall, it was a bit of a mixed crowd that got extraordinarily loud at every small wink and gesture made by the charming performers. The collaborative harmony of cheers from a somewhat gender-balanced crowd reminded me of being in the student section of a spirited homecoming pep rally.

Nevertheless, there was indeed a handful of uncle fans present but they were more towards the back of the crowd, complacent with seeing the girls from an uninterrupted distance. They swayed with the music and joined in on the applause, looking upon the younger crowd with the solace of a been-there-done-that type of attitude. As I glimpsed upon them, I saw a reflection of myself in the near future and wondered whether or not I’ll be attending another A Pink concert when I too pass the proverbial threshold of becoming an uncle. 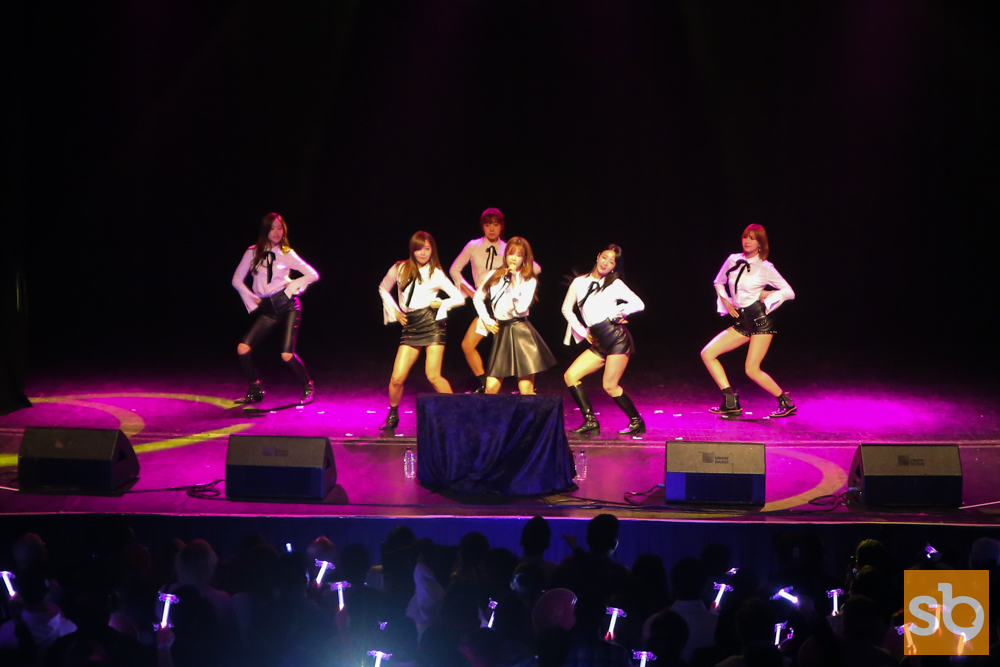 2. Eunji and Bomi do all of the legwork when it comes to the vocals.

This I found to be utterly untrue. I found the members’ lines to be fairly even distributed. I was pleasantly surprised how often Hayoung, Chorong, and Namjoo got to demonstrate their vocals and I was especially shocked by how well Namjoo sounded. Eunji undoubtedly gets all the showy high notes and adlibs, and she sounds absolutely fantastic in all of them, but Bomi and Namjoo are not far behind as they too do a lot of the heavy lifting in the vocals department.

And every once in a while, Naeun gets to sing too.

The area that Eunji and Bomi actually dominate is in variety. I give props to all the members for keeping the talking segments fresh even though they’ve done it twice already on the tour. But there’s no doubt that Eunji and Bomi absolutely steal the spotlight when it came to the talking parts. Bomi is the ditzy one that everyone loves because they feel sorry for her. She gets shamed for being the member most likely to be up at 3 AM eating ramen and she seems to enjoy getting picked on because she plays the good-natured fool so convincingly. Her role is that of the jester in which she allows herself to be the butt of the joke but is able to play it up so that it gets the audience laughing along with her, while also at her.

Eunji is Eunji no matter what she’s in. Whether she’s acting in a drama, doing a variety show, or doing live variety in a concert, she always plays the mischievous troublemaker. She’s got that sassy grin that just makes you think she’s up to something. She’s the one who’s there to act a bit out of line when the moment calls for it. For example, during the question and answer segment, when one of the other members was asked what she likes, Eunji interjected and answered in English, “Beer. I like beer…and soju.” And of course she had to insert her signature grin at the end of it as if to let the audience know that the punch line has been delivered and it’s now time to laugh. Bazinga!

I wish the team variety portion had more balanced teams as they put Eunji, Bomi, and Chorong (Team Unni) on the same team. Needless to say, their team was far more entertaining to watch than the one consisting of Namjoo, Hayoung and Naeun (Team Dongsaeng). And to make matters worse, they let Team Unni go first. Team Dongsaeng tried their best and actually won the contest somehow, but Team Unni absolutely stole the show.

And every once in a while, Naeun got to speak a few fluent words of English. 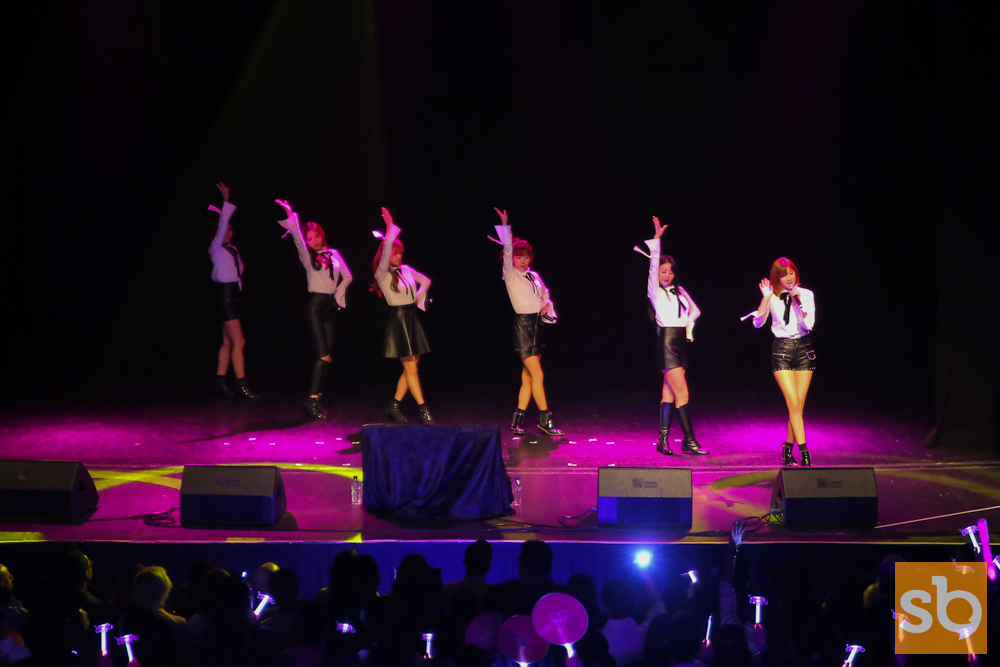 This is absolutely not true…of their b-side songs. Other than their promoted comeback songs, A Pink performed a few numbers which weren’t as highly promoted. Of those, my favorites were “Good Morning Baby,” “Sunday Monday,” and “U You.” One of the advantages of being a highly successful group is that you’re always guaranteed to promote an additional song on music shows as an intro to your comeback song. I’ve always thought A Pink paired their promotions with good intro songs and I’m glad I got to see some of them performed live.

As for the hugely promoted songs, their biggest hits “Mr. Chu,” “LUV,” “Remember,” “My My,” and “NoNoNo” were done very well and sounded better live than what I’m used to hearing from them on music shows. Notable omissions were “Hush,” “Bubibu,” and “I Don’t Know.” It’s as if they wanted us to forget about their debut and Une Annee phase but it’s most likely because they didn’t have time to fit it into the set list.

4. The success of A Pink is largely based on the individual fame achieved by Eunji and Naeun.

I came into this concert most excited to see Eunji and Naeun and I left realizing that it’s Eunji that is the true star. I was blown away by Eunji’s vocals, I was charmed by her personality, and at the end of the night, I was left with a fever and the only prescription…is more Eunji! Truth be told, she’s a multi-faceted performer who’s praised for both her musical and acting abilities. She’s the one most of us came to see and her alone is worth the price of admission.

I know I’ve been bagging on Naeun this whole time but, to be honest, she just wasn’t very memorable. I get that she gets a ton of camera time in MVs and music shows, she probably looks and smells amazing up close, and she’s got bragging rights on everyone for having kissed Taemin. But as a performer, she was just overshadowed by the other members. Not only in the music, but she often looks detached and disinterested in the talking segments. But at least she’s cute and she speaks English with a surprising fluency. 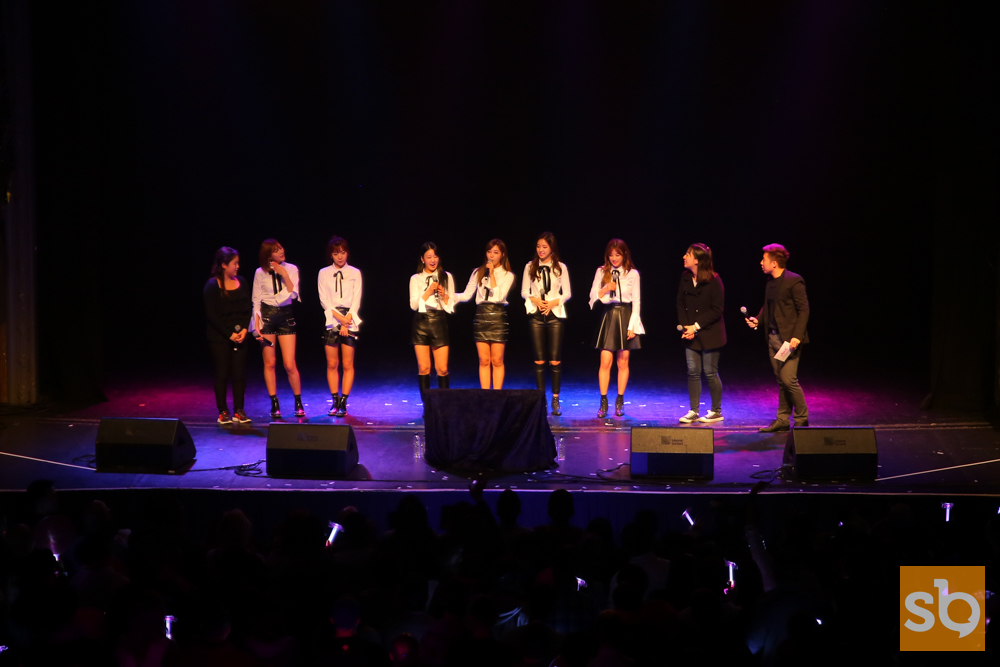 A Pink stands on an island right now in accordance with its girl group peers. It’s the last stronghold for innocence, chastity, purity, aegyo, and sanitized non-gratuitous concepts which have yet to be compromised by a hint of dark eye shadow, fishnet stockings, or low-cut tops. In sticking strictly with innocent concepts and never having once tampered with the dark and sexy side, A Pink is playing a dangerous game. They’re the only group to have stuck it out this long since girl groups usually go from innocent to sexy by the third or fourth comeback, and they’ve earned a ton of success and respect for doing so.

But the urge will always be there as fans are always begging for more. In other words, A Pink hasn’t even capitalized on its full potential yet. It’s created a huge fan base by catering to only one type of fan. A Pink is holding a wild card in its back pocket and the longer they wait to use it, the greater an impact it will have. And when the time comes for them to partner with Brave Brothers and display their sexuality a bit more, then the feeding frenzy would be intense. In the meantime, I’ll be patiently waiting.

I guess that wasn’t really an observation from the concert as it was my general thoughts on the group.

I like to thank KpopME for producing the show and making the Pink Memory Tour in North America possible. Overall, it was a fun night and I had a great time. Girl groups don’t hold solo concerts in the US very often so it was definitely a treat that I got to see A Pink in my hometown.

Readers, were any of you at the show? What are your thoughts about the future of A Pink?