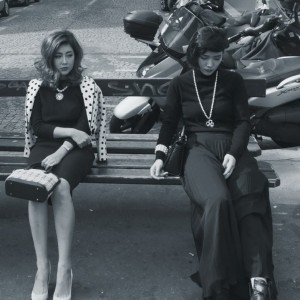 VIVIS came to me in a rush of contemporary dance set to the angel sigh of some of the most ethereal electronic music I’ve ever heard. It was a chance browsing of Mirrorball Music’s YouTube page. My eye caught a black-and-white screencap, not really unusual for an indie artist under the prolific indie label. But the words “art performance” in the video’s teaser got me intrigued. What I discovered was a female duo creating sublime electronica, something I’d rarely seen no matter what language I’ve been searching under.

Of course you’ve got your odd artists like Gaelle making House music and making it with an added layer depth that can go missing in the music of their male counterparts — even legends like Jay Denes or even the melodic stutter and warble of Space Cowboy. But all around it’s the typical boys club in the genre. So when I come across a female artist with the sophistication and sensitivity in their sound as found in VIVIS’s music, I most certainly count it as a blessing.

The group, comprised of musicians Sol-bi and Kim Kyeong-in, is more than just what you’d expect from the genre. Of course we get the brilliant use of overdub and well-placed drum machine beats. But the addition of actual drums and piano picks their sound off the jungle floor and allows those who may not be as compelled by the electronic sway of House music to take something powerful away from the sound.

VIVIS’s debut EP Trace is the perfect amalgamation of all their musical elements. Equal parts ambient music and musical precision, the album consists of five distinct yet beautifully rendered tracks. “Daydream,” their lead single and the song that caught my attention, is as powerful as a blow to the heart but as delicate as the whisper of a butterfly’s wings as she flutters past you to dance on the petal of a sunflower. The song is truly the best bits that make up a Korean soap opera, and the music video adds to the mystery and drama of the piece.

On the other hand, song “Deep Relationship” very much reminds me of something artist Bittersweet concocted one night while on a stroll through the Avenue des Champs-Élysées. It’s Equal parts lament with its wistful vocal and unapologetic declaration with the stark una corda pedal push of the piano. While definitely delicate, there’s absolutely nothing shy about the sound. It’s open, honest, playful at times, but certainly unafraid to proclaim itself. 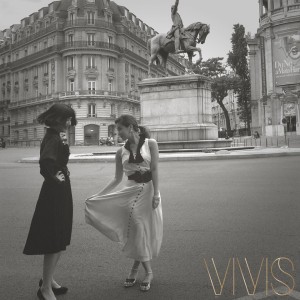 With the addition of MC Justhis for the final track on the mini, “10 Seconds,” the group adds a growl to the softness of their sound, an oddly balanced mixture of acoustic, electronica and the combined prettiness in the vocal and Justhis’s guttural verse. The album ultimately becomes more than just a collection of songs. It’s a statement, an unquestionable affirmation of the group’s presence in a genre that’s overwhelmingly saturated with men — which is somewhat surprising considering the melodic and oftentimes overemotional nature of the music.

VIVIS is much more than just a female two-piece. They’re a band creating their own niche in the Deep House genre, adding even more depth to the sound with the brilliant usage of an eclectic mix of genres to mould a sound truly unique and honestly and simply beautiful. If you take a look at the horizon, you notice the haze created when the sun nestles between the clouds. That’s where you should cock your head ever so slightly to hear the sound of VIVIS and keep it nestled in your heart.