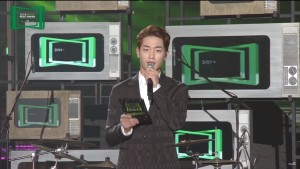 Held in Seoul, the 2015 Melon Music Awards kicked off the end of year awards show season on November 7. Actor Seo Kang-joon was the main MC this year for this kid sibling of awards shows. When compared with the MAMAs and the Gayo Daejuns of the Korean entertainment industry, MNET’s official awards show has always seemed like child’s play.

This year there was a decently popular lineup of performers for the show. Monsta X kicked off the performances. Their dancing was top notch as always and they were bravely trying to actually sing, customarily for awards shows, rather than just lip-sync. Their singing could have used a little extra practice, but they weren’t the only ones who had some difficulty with the live mics. Overall, they were a great start to the night.

GFriend took home the first award, for Best New Female Artist. Winner, the rookie award winner from last year, presented these awards. All the members of GFriend looked moved and were on the verge of tears during their adorable thank you speech. The Best New Male Artist award went to iKon, who didn’t even look surprised. Big Bang reached out and congratulated them as they left the artist seating area, and the iKon members remembered to thank their fans and the company and their YG sunbaes, Big Bang and 2NE1.

The performances for GFriend and iKon seemed to mimic their attitudes from their thank you speeches. GFriend performed solidly as rookies, though the live mics on stage proved somewhat problematic for them. Some of the girls were much louder than others and it reflected a bit poorly on their singing skills. Otherwise, they were quite enjoyable to watch and looked like they were having fun.

On the other hand, iKon’s stage started with them walking coolly in through the audience, but there was no energy. It was as if they were trying to do a smooth jazz remix version of the song, My Type, but it fell flat. They tried to kick it up a notch with Rhythm Ta (adding stage effects, backup dancers, and a band) but it still looked boring. Their dancing and live singing simply didn’t hold up to the expectations created both by their award win and the loudness of the stage itself. Either that or they were trying too hard to be cool — after all, they are still rookies and sticking to the basics might work better for them. Both iKon and Monsta X also had some difficulty with how new and slippery the stage was that night. Luckily, it didn’t turn out to be a huge problem, and all of the veteran groups did just fine with it.

Throughout the night, the MCs introduced a cute fan service moment they called “MusiConnect”. The first one showed two members of Sistar singing and dancing alongside an ordinary fan (who also happened to have a great singing voice). A bit later there was one with Zion T. and a male fan who could also sing (and now it’s clear what the theme was). Zion T. seemed to be quite impressed with the singing skills of his fan and worked on harmonizing with him rather than taking control of his own song. Another great harmonizing moment came later on between Seungri and a female fan singing Loser together, and with San E and his fan, where it was clear that San E was actually impressed by the fan and wanted to listen to them sing rather than performing for them.

A series of awards were given out next. The Top 10 category was opened by APink, San E, Sistar, and Girls’ Generation (who only had one member, Yoona, there to accept the award). San E loyally used his thank you speech to help promote his friend Mad Clown, who was also there as the winner of the Best Rap & Hip Hop award. The next award was for the Best Trot singer, and was given to Hong Jin-young. Her performance, up right after her win, was a great change of pace from the pop groups, and even though I couldn’t read and understand the hashtag placards the other artists were all holding up during her song, it was adorable and I loved that she interacted with them, her fellow entertainers.

One of my favorite moments of the night was next as Oh Se-deuk & Lee Won-il, two of the professional chefs who star in the popular show Please, Take Care of My Refrigerator came on stage to announce the next two Top 10 winners. They brought fresh bread baskets with them as award gifts. Literally, little baskets full of bread. They are chefs after all.

EXID performed next to lackluster reviews. Their performance was labeled “dynamic”, which was exactly what it was not. The ladies seemed to be only dancing half-heartedly and while they had many male backup dancers doing many cool and energetic b-boy moves, the ladies frankly looked bored while doing their own choreography. Red Velvet, who performed immediately after, were a completely different story. They were very much into their stage, and while I was overwhelmed by all the colors and backup dancers and everything else that was going on onstage, it was enjoyable to watch the ladies have fun.

Now we begin to get into the surprise awards — the ones the stars aren’t actually expecting to win rather than the ones that were sure shots. The Melon Music Star award went to EXID, who have really had a great year with a great flush of popularity.The 1theK Performance Award went to Monsta X who, when they were announced, looked so stunned they didn’t even stand up right away. They didn’t have a thank you speech prepared and had to rely on their most talkative members to ping pong back and forth people they should give thanks to.

Finally, Big Bang was awarded their first win of the night, the Netizen Choice popularity award. This was, of course, only the beginning of the Big Bang Awards Show. Seungri gave a thank you speech that really only focused on thanking and directly addressing their fans (who, judging from the screaming, vastly outnumbered any other fandoms in the audience), but that’s ok because they had many more chances to thank people coming up.

Just as we were getting psyched with good surprising awards, then BTS performed! Finally, a stage we could all get excited about, though maybe not all for the same reason. Their live singing was top form, their dancing was exciting and scream-inducing, and their costumes were… rant-worthy. At least they tried something new, but vinyl jackets and shorts? Not really a look that’s worth a second chance, in many fans’ opinion. At least the spectacular dance intro, with the synchronized iron-man light-glove show, more than made up for it. Next, Verbal Jint, Bumkey, San E & friends, otherwise known as Brand New Music, gave a fascinating performance backed by a DJ, a full orchestra, and a grand piano! These are the kinds of innovative performances I want to see in an end of year awards show.

And now the show is in full swing. I’ll just give you a rundown of the next few awards and adorable MusiConnect fan moments. Toy (You Hee-yeol) had a MusiConnect with a male fan, and the fan was the only one who sang the song. Instead of singing along, You Hee-yeol listened appreciatively and even gave him great compliments throughout, saying at the end he sincerely thinks the fan should become a singer. Idols take note. The next Top 10 awards are awarded to Hyukoh and SHINee (who sent in a thank you message via video), and then Big Bang. 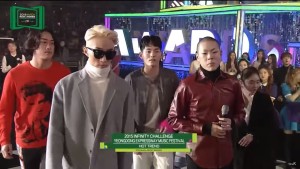 Band Hyukoh has their time to shine now. Their performance was a little rock plus a little tribute, everything a good music show needs, and their fan during their MusiConnect looked so happy to be singing along with them while they just jammed on screen. Zion T. and Hyukoh then together accepted the award for the Hot Trend, which was awarded for the Infinity Challenge 2015 Yeongdong Expressway Music Festival that they participated in alongside other artists such as IU, Taeyang, G-Dragon, and many more.

The two Best Dance awards are given out to Red Velvet and BTS, deservedly. Considering how great Red Velvet’s performance was earlier and the fact that their choreography for “Ice Cream Cake” was so much fun and really very challenging, they completely deserved this one. As did BTS, who have just dominated the complicated male dance choreography scene this year. However, I did have some qualms with the other nominations for Best Male Dance, considering they included Jinusean (who are great artists, don’t get me wrong, but not the most spectacular dancers) and left out both Infinite and SHINee, who had two of the best dances of the year in my opinion.

Next, we were given three more Top 10 winners, Zion T., Exo, and You Hee-yeol. Exo, who also couldn’t make the live show, sent another video thank you. Zion T. and You Hee-yeol are much more thoughtful and heartfelt with their thank yous, again seeming more genuine and respectful. And then we dove straight into the headliners of the evening.

APink’s stage was fine, nothing particularly exciting and nothing gone wrong. Despite doing a medley of songs, some of which were big hits, it still felt like an opening stage for the real show, which was clearly Big Bang. Big Bang’s stage was great as always, but also absurd. It was a miniature concert, as if that wasn’t clear by the vast majority of VIPs already in the audience. They performed five full songs — four of their new songs from the summer and then a planned encore of “Fantastic Baby”. I say planned because there was no way they wouldn’t have done it with that many fans screaming that loud. The show producers also emphasized the concert feel with fancier camera work of the five members, and the lack of cutaways to the artist seating area. They only gave us two clips of iKon and GFriend dancing along with “Bang Bang Bang”. I forgot for a moment that I was watching an awards show, which would have been fine if there were more artists there to also enjoy the break from routine and share in their friends’ excitement, but instead it just felt like another live performance with all the focus on the fans and giving the fans what they want.

After Big Bang performed, the final two great daesang awards seemed almost like an afterthought or an obligation. Exo won for Best Album of the Year (side note: all the nominees mentioned in the live show were men, despite APink’s LUV being voted higher than both Hykoh’s 22 and Toy’s Da Capo, which were mentioned). Red Velvet adorably and awkwardly accepted the award for EXO’s win of Best Album of the Year, since they couldn’t be there. And, of course, the Best Artist of the Year went to Big Bang. To their credit, they looked very moved while T.O.P was giving their final thank you speech, and they really do deserve the award after the masterpiece they’ve produced with seven music videos in four months this summer, and their massive world tour on top of that. This certainly won’t be the last award they win this year either; I just hope the other award shows do give us a bit more variety.

Awards and artists not even mentioned in the live show: