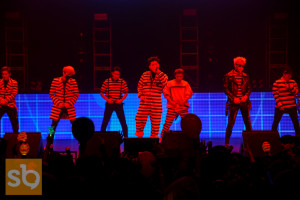 As the boys of Block B made their way through the California leg of their Blockbuster tour, members of the Seoulbeats team received the opportunity to attend their concert in San Francisco on November 11 and in Los Angeles on November 15. Mark and Nabeela caught the Wednesday night show at The Warfield Theatre in San Francisco while Willis and Lindsay attended Sunday night at Club Nokia in Los Angeles. Looking for the scoop on the latest Block B action? Look no further as the writers who attended attempt to put into words the performances and spectacles they witnessed during the two shows!

Lindsay: I’ll say to you all exactly what I said to Willis at the concert about the man in the mask, “I’m not even mad.” Of course, it was unfortunate that Jaehyo was injured, but the man in the mask (Jaehyo’s stand-in), who I assume is a backup dancer or trainee, was honestly killing it on stage. He fit right in and seemed like he belonged in a boy group. At least Jaehyo still got to sing!

Unfortunately, LA did experience some minor technical difficulties which delayed the show, but not for very long so it ended up hardly being an issue and the show started with a bang. What can I say? Block B is a super high-energy group, which makes their concerts fun to attend — whether you’re a fan or not. One of the side-effects of that energy level, though, is that you’re exhausted by the end because you’ve been going hard right along with the guys the entire time. 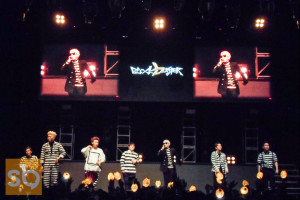 Also, I was totally into the “Blockbuster” theme. There were lots of movie references and interesting video interludes that broke up the concert — in a good way — and engaged the fans while the group went through costume and set changes. I’ve never seen a group get the entire audience dancing to a routine before, but that’s exactly what Block B’s interlude videos did.

Mark: Being that this was my first ever K-pop concert, I came in with not too many expectations and probably benefited from not having such. First of all, the man in the mask completely caught me off guard. I thought Block B had a new member all of a sudden. But after coming to my senses, I realized that this was actually quite a creative way to compensate for Jaehyo’s injury. I’ve never seen anything like it and, yes, he did blend in very nicely with the rest of the members during the choreography. Anyone want to start a petition for Block B to incorporate an eighth member?

As for the performances, my favorites were the high energy ones such as “Very Good,” “Nanlina,” and “Conduct Zero.” I was basically there for Zico and I was crossing my fingers for him to perform more of his solo hits but I was quite pleasantly surprised when the one solo stage he performed turned out to be “Okey Dokey.” I think that was my highest point of the night as the call and response aspect of the song resonated very well in such a compact crowd. 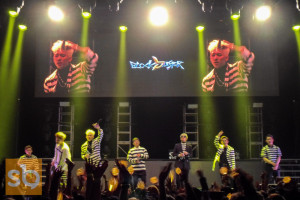 The low points for me were the b-sides and the ballads. Surprisingly, they had choreography for some of their b-sides and it was quite interesting to see these unique performances which aren’t readily accessible anywhere else. The ballads, on the other hand, were just not my cup of tea and I don’t think anyone went to the concert anxious to see Block B stand still on stage to sing slow, melancholic tunes. The good thing was that the slower songs were sandwiched between the high energy ones making them slightly more digestible.

Lastly, I must comment about the much notable omission of “Nillilli Mambo” from the set list. One of their most well-known and arguably best songs, and they chose to perform “Very Good” twice (granted that the second time was the “Rough Version”) instead of “Nillilli Mambo?” Needless to say, I felt a bit let down when the final curtain dropped. But, overall, it was still a very enjoyable concert that was filled with a ton of fun and energy.

Willis: Yes to the clever Blockbuster theme! I was trying my best to pick up that tidbit of choreography, but since I didn’t have a decent view of the screen, it was a challenge. I’ve been to Club Nokia in LA a few times now and I found that if your seats aren’t near the center, your view of the stage may be obstructed. But even with an obstructed view, the fans around us were in it — dancing, singing, and rapping along to every word.

I remember f(x) incorporating a couple of masked dancers a while back, and I think it helps alleviate the burden of altering the original formations and blocking. The man in the mask was good. He had a relaxed swagger to his dancing that allowed him to flow seamlessly with their choreography. 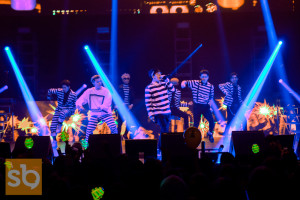 My favorite performances of the night were the rough version of “Very Good,” “Her,” and “Nanlina.” I will applaud Zico for his charisma on stage; he gets so completely immersed in his performance, to the point where his facials and dancing all become super animated — it’s great! I also thought B-Bomb, P.O, and U-Kwon had good stage presence. I was most surprised by how well their personalities were able to come across on stage. I probably wouldn’t have minded the ballads if the venue’s acoustics were better. Taeil‘s mic was spotty throughout the night, but in the moments when I could hear him clearly, he sounded fantastic.

Nabeela: Personally I was both ecstatic and concerned as a fan. Ecstatic becaues I’ve been waiting to see Block B up close and personal for most of my young life as a fangirl, but concerned because stateside concert tour legs are not always the bearer of good news when the artists hail from Hallyu. I got the feeling that the Blockbuster tour was sort of thrown together to keep a pulse on the general Block B buzz because they’ve been off circuit as a group in Korea for some time now. 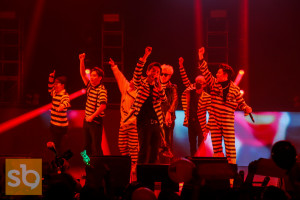 The Blockbuster album (which is still one of my favorite albums of all time) also came out in 2012. So it was a bit offbeat to be doing the Blockbuster US tour leg now. But given the past tumultuous year the group endured between the drama of switching companies, and cancelled comeback promotion after the unfortunate Sewol ferry disaster, it is understandable that their timetable is still a bit skewed. However, as the fangirl that I loyally am, I must say it is commendable that they came all the way stateside to keep the dream alive overseas. Overall, of course, I absolutely adored having the boys open the second part of their US tour in my city!

You’ll notice at a Block B concert that the group is not choreography intensive across their discography, but that is not to say their choreographed pieces are not near heart-stopping. The skills of the dance line anchor the fiery and unleashed charisma of the rapper line, which 10/10 times makes for an exciting show. Also, what I know and what any concert-goer will notice is that Block B members love their fans. I’ve been to other concerts where it seems like some groups still orbit a different type of decorum with their international fans because of a language and culture barrier, but all the Block B members found ways to do their best that night to engage with the crowd and make them feel seen just as much as we were making them feel heard. This is a group that has been through some serious ups and downs, and they earnestly appreciate their fans’ contributions to their continued success. 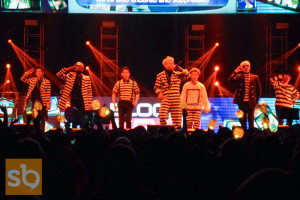 In terms of the venue, I’ve been to the Warfield in San Francisco before, but I’m not crazy about it. It’s an old school vaudeville concert hall that is curved in such a way that some vantage points are obstructed by equipment necessary for high-energy musical performances. It is, however, a smaller venue (its seats 2300) so you’ll always have a good view of your faves.

I was not surprised to see an older crowd at the concert that night, and there were also a considerable amount of fanboys and manfans at the concert. In the eight years I’ve been going to K-pop concerts, the crowds have gotten increasingly more diverse, and I’ve also noticed more male groups appealing to more male fans, so that was a nice change of pace than a field of rabid fangirls like myself.

I really felt for Jaehyo because he’s sat out for injuries before and you can tell he absolutely hates it. He’s not known for being the most musically renowned, but he really does love performing and has great chemistry with the other group members. His stand-in did a great job with the choreography — I didn’t notice it wasn’t Jaehyo for a couple of songs to be honest — but you can tell the group choreography is lacking that final component to their complete chemistry. But they were doing what they could!

My favorite moment was obviously my staple jam, “Nalina,” (the best K-pop song you’ve still never heard) because that stage just turns the venue into a huge party. I also loved Zico’s solo stage because I’m a die hard Zico stan. He’s the king of K-pop, and I have no apologies for saying that. 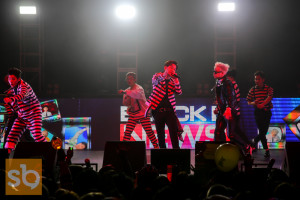 Mark: I’m not sure if I would agree with the crowd being labelled as “diverse.” It felt at times like I was the only male left on the planet (which might not be such a bad thing). What I was surprised by is the fan variance in age. Yes, there were your prototypical high school age fangirls, but you also had some folks who you can readily describe as middle-aged screaming and jamming just as hard as the next teen on a sugar and adrenaline high. That is something you don’t see every day.

Lindsay: All in all, it was a good show. It’s hard to go wrong with Block B because they always bring a ton of energy to their performances. My only request for their next American tour is that they book a venue with a bigger stage. They looked cramped on the tiny Club Nokia stage. If they’d had more room, they could have jumped around and played with the crowd even more. Basically, everything would have been just that much more spectacular if they had more room.

Readers, were any of you able to catch the Blockbuster tour? Please share your thoughts!