B.A.P Grows Through Pain in 'Matrix' 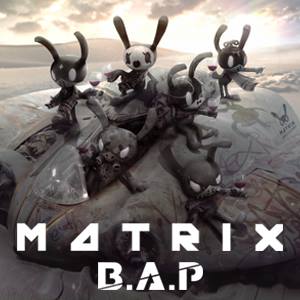 Tenacity is a requirement to succeed in the entertainment industry. There are so many ways in which a group can falter, but it’s how they recover from those moments that count the most. B.A.P experienced a rough year after they filed a lawsuit against their company TS Entertainment. The long, tense process ended with the group returning to their company under hopefully better circumstances.

It’s times like this in which recording artists flourish through their work. They can channel their frustrations or joy into their art and then share it with fans. This is the magic of creating music.

Matrix was produced by B.A.P’s leader Bang Yong-guk. The general consensus of self-produced albums is that the artists are given more creative freedom, allowing them to truly reveal themselves to their fans. It’s exciting to hear what a group is capable of making when their company loosens their control. On the other hand, it can also be a letdown when the material itself falls short of expectations.

B.A.P is known for their image of defying convention, and that is never more apparent than with their opening track, “Take You There.” There seems to be an emerging trend to eliminate the typical intro tracks in favor of jumping straight into the album with a full song. The tune is infused with a jazzy pop beat which is ideal for its flirtatious theme. The brightness of the horns is balanced nicely with the piano in the background as B.A.P promises to fulfill the desire of their lovers.

I’ll take you
To the place you want
I only need you
Just by my side
Different from the obvious wolves
You know it when you look into my eyes
If you want me, just tell me anytime

It’s cute and charming, but is this B.A.P? My issue with this song is that it sounds safe and mediocre. It would be fine coming from rookies since those groups need to grow their fan bases in the beginning, however, this is Best Absolute Perfect. They should be moving forward, yet this feels like a step backwards. The instrumentals blended nicely with their vocals, but the song lacks authenticity.

Awkwardly inserted as the second track is “Monologue.” It is simply a monologue featuring Bang Yong-guk as the main storyteller. Now, this track does hit on some emotional notes as he describes what the group felt during their hiatus. He stresses the importance of sticking together as a unit through tough times, which I’m sure resonates heavily with their fans. I love the content of this track, especially as a set-up for their title track, “Young, Wild & Free.”

Initially, I wasn’t wowed by this song on its own, but when it’s preceded by “Monologue,” it holds a greater impact. Using a heavy rock beat is cliche when it comes to rebellious youth anthems, but it’s the lyrical content that saves this tune. I particularly enjoyed Bang Yong-guk’s rap verse.

Beat up, even crawling on the floor, I’ll stand up
My youthful days, there’s only one life
Blindly keep running, look ahead
Burn up this youth that has bloomed so dangerously
Shout I’m the best, my way the highway
No pain, no gain, drink it up
I’m fueled with the caffeine called pain

Basically, B.A.P has zero intentions of ever quitting music. They are determined to battle all barriers, including conflicts within their own agency. This is probably the most autobiographical track off the entire mini-album. That’s not to say that all songs must be personal to be good, but it means more when the group can truly relate to them.

“Be Happy” is a jovial joint flush with the upbeat feelings of Mark Ronson‘s “Uptown Funk.” There is an abundance of brass, drums, and tambourines as the group pumps up the energy. My guess is this song was written after things settled down between B.A.P and TS, which meant celebrations were in order. I never scoff at having a good time, especially when the group sounds genuinely ready to party. 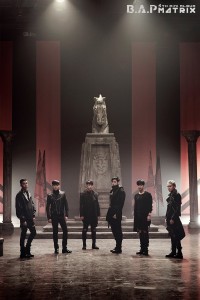 Oddly, things take a different direction with the final track called “Blind.” It’s a song about heartbreak, and it’s strange to hear it follow an extremely lively tune. The slow rock theme works for the mood of the song, and B.A.P proves they are very good with this genre. Still, something feels disjointed here, and I’m blaming the placement of this song. It’s such a downer, and granted, Bang Yong-guk probably thought it best to slow things down to bring fans from their high in the previous track, but this is like being shoved off a bridge. It was simply a weird way to end things.

My biggest gripe about Matrix is the track list arrangement. Understandably, some fans may not care about song order because they use the shuffle option, but I prefer albums to tell a story through the progression of the tracks. I feel like B.A.P was put on a time crunch for putting Matrix out, and that’s the likely culprit for this messy mash-up. If they were given more time, they could’ve picked a more cohesive theme that would’ve better served the group.

Since the album is called Matrix, I’ll take a chance in betting it’s no coincidence that it turned out like this. Maybe it was meant to be the foundation of a new direction for B.A.P, and they took this opportunity to experiment with different styles. It may not be everyone’s cup of tea, but that’s what it means to grow as artists. It means taking risks, even if some fans could be put off by the final product. I wasn’t wowed by the mini-album, but I can appreciate what B.A.P tried to accomplish here.