She Was Pretty, Ep. 1-4: A Strong Start with Great Characters 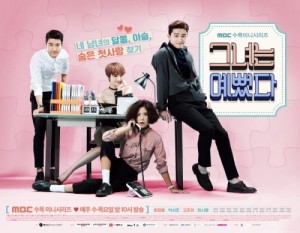 Of the many dramas starting this cycle, She Was Pretty was the only one to pull me in immediately; an extraordinary accomplishment considering my low tolerance for rom-coms. Fortunately, She Was Pretty avoids the typical trope-heavy, substance-light approach that I expect from this genre. Despite its shallow premise, the drama uses strong character development and an actually tight narrative to drive the tension.

The story is rather cliched: Kim Hye-jin (Hwang Jung-eum) was once a gorgeous girl from a rather well-off family, and Ji Sung-joon (Park Seo-joon) used to be the stereotypical chubby nerd. The two were childhood friends and first loves, but when Sung-hoon moved to the US, they fell out of touch.

Years later, they decide to meet up, but things have changed. Hye-jin’s family went through financial troubles, and the once dormant genes of her father have developed in her, leaving her ruddy-cheeked with freckles and frizzy hair. Sung-joon, on the other hand, grew up to be handsome (read: hot) and successful in his career as an art director. 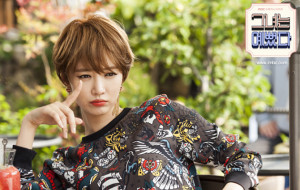 Fast forward to the future, Sung-joon returns to Korea and asks Hye-jin to meet up. The reunion fails when Hye-jin realizes that Sung-joon has not only gotten attractive but remembers her the same way. Wanting to keep his great memories of her intact, Hye-jin sends her gorgeous best friend and roommate Min Ha-ri (Go Joon-hee) to pretend to be her. After Ha-ri as Hye-jin pretends to be studying abroad, thus ridding herself of any obligation to see each other regularly, Hye-jin thinks she’s rid herself of her problem, only to find out that the internship she’s just received at a magazine is under him.

At face value, the drama initially seems to set itself up to be a sort of Cinderella-like transformation tale of fashion, beauty and love. Cue the gagworthy cheesefest of overdone cliches, overused tropes and mild sexism. At least, that was what I anticipated going into this drama; but one glance at Kim Hye-jin in the first episode is enough to prove that wrong.

Despite her lack of good looks, Hye-jin is a bright hardworker who doesn’t let pretty much anything get her down, including her supposed ugliness. I say supposed because Hye-jin is most definitely not ugly, but rather just ordinary. It seems that She Was Pretty is subtly commenting on the emphasis on looks in society along with how that affects treatment and where one falls on the totem pole.

From her acceptance of her looks, unwavering optimism and confidence in her abilities, Hye-jin’s attitude is refreshing. She doesn’t care that she isn’t the prettiest girl in the room. Hwang Jung-eum also brings an endless supply of energy to the role, firing on all cylinders whether it’s to do some sort of task at The Most office or to freak out about some awkward moment with her boss and former schoolmate. Despite that almost over-the-top enthusiasm she brings, Hwang manages to reel it in and portray as Hye-jin as nuanced and realistic. 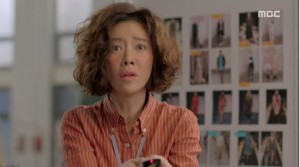 To play off that, Go Joon-hee has great chemistry with her; they make the perfect best friends. I’m happy to see two female leads that are best friends and have that almost weirdly (to the outside world) close relationship that childhood friends have, such that they are in each other’s phones as husband and wife.

It’s great to see how much they support one another intheir their personal relationships — Hye-jin advises Ha-ri to quit playing around at the beginning so that she can fall in love — or with work successes — Ha-ri tells Hye-jin bluntly that she hasn’t done her part to learn about fashion.

Ha-ri as a person strikes me as having a lot to her that we still don’t understand. Her family is clearly wealthy, but she has a strained, to say the least, relationship with her stepmother and father. Her mother’s death seems to have changed her greatly, and so I can completely understand her impulse to be close to Sung-joon whose mother also died. That emotional trauma at such a young age is hard for others to understand, but Ha-ri, who’s never even believed in love and thought all men were the same, is starting to think she may have found the one person who does understand her.

The decision to hide the continued relationship with Sung-joon is sweet, considering how stressed Hye-jin has been about all of this at work, so she wants to shield her from something that she thinks she can sort out herself. Considering the closeness of their relationship, though, it’s surprising that she hasn’t blurted it out or that Hye-jin hasn’t realized her friend is acting oddly. Of course, that’s the farce of dramaland — so close to finding out, but never actually doing so until everyone is invested and in way too deep.

It’s imminently clear that Ha-ri is going to fall deeply in love with Sung-joon and end up hurting Hye-jin, but it doesn’t seem malicious as many of the short-hair second female leads tend to be portrayed. Instead, it seems like a good-willed, honest-hearted mistake on Ha-ri’s part, especially since we know that she didn’t even believe in love before this. 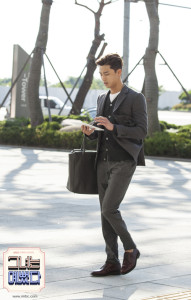 What I find hard to excuse is Sung-joon’s character, such as his harshness on The Most staff, especially Hye-jin. Of course, the real world of publishing is high pressure and fast paced, and so many editors become no-nonsense and focused because of it. The problem I have is with Sung-joon’s pendulum swings of attitudes. Sung-joon is unmoving and cold at work but then effusively warm and kind with Ha-ri as Hye-jin, as though a switch were flipped, which is not exactly how personalities work.

Sure, he may be the most tunnel-vision focused person I’ve ever seen in real life or fiction alike, but he is human and so should have some sort of consistency of character in both work and personal activities. I’d hoped we’d see him relax a little as things went on, sort of starting firm to push them and keep them in his control and then chilling out as the team’s routine was more set in stone. But instead we get Sung-joon’s quick, harsh judgment of proposals and an increasingly hostile work environment where everyone is scared to say or do anything to upset him.

But as Sung-joon thaws toward the real Hye-jin, I am excited to see their childhood chemistry resurface. Park Seo-joon has an interesting way of playing off Hwang Jung-eum, and I’m curious to see what kind of chemistry they will have later on. Really, it’ll be interesting to see how that friendship is going to develop considering how much both, but Sung-joon in particular, have changed as people. Nostalgia can only do so much work to rebuild a relationship. I definitely see it bringing them together, as he sees the little things in her that remind him of his childhood memories with her, but I’m not sure how they will change such an antagonistic relationship to one of romance.

In the meanwhile, I am going to continue to enjoy our final lead role of Kim Shin-hyuk, the goofball features editor at The Most. My favorite character thus far, Shin-hyuk has this carefree joy to him that I find both funny and endearing. He may be one of the best writers, according to Sung-joon’s assessment of the staff, but he doesn’t take himself too seriously.

There is also definitely a lot to learn about his character. He’s talented, lighthearted and, of course, attractive (thank you, God, for scruffy Siwon), but there’s also clearly some back story to him that we don’t yet know. He mentioned a six-year-old little sister who died, but that’s really all that we know about him. I also absolutely love that he’s already nursing a crush on Hye-jin aka Jackson (his cute nickname for her thanks to her penchant for wearing white socks with shoes), despite the fact that she’s not conventionally pretty. 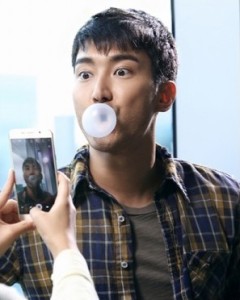 Shin-hyuk seems so genuine and just adorable that I’m already preparing myself for Second Lead Syndrome. It doesn’t help Siwon has so much energy that meshes really well with that of Hwang Jung-eum. They are both so animated and fun, so the relationship between Shin-hyuk and Hye-jin is just so gosh-darn cute.

The ending scene when Hye-jin is so drunk that she falls on the pavement and dumps out her purse in search of her phone, and Shin-hyuk is helplessly trying to figure out what she’s doing and why she’s calling Sung-joon doesn’t just prey on the audience’s tension about whether or not Sung-joon will find out that she is the real Hye-jin.

Instead, it uses the characters and their quirks to keep you glued to the screen. Hye-jin’s optimism paired with her mind for fairness perfectly explain why she wants to call Sung-joon when she’s drunk so it’s not just an obviously placed trope used to drive the plot. She didn’t deserve his outrage at the airport, and Shin-hyuk feels bad for putting her in that situation so he feels the need to take care of her. I just need Sung-joon to redeem himself and actually make me like him for more than his good looks and great style because as it stands, I want Shin-hyuk to win her heart.