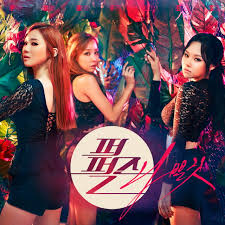 After splashing onto the K-pop scene in late 2014 with “1,2,3”, Purfles has been curiously absent. Their debut was lauded alongside Mamamoo‘s as one of the best of 2014, yet it’s been almost a year with nary a peep of a comeback. The wait is over, though, as they have finally returned with the hard-hitting and heart-wrenching “A Bad Thing”.

“A Bad Thing” is smooth, smoky and slow. The jazzy instrumentals mesh perfectly with the ladies vocals without drowning them out. Their richer tones meld together to produce some of the most stunning harmonies in K-pop this year. Even better is the plethora of held notes that are peppered all over “A Bad Thing”. Instead of being saved for the climax of the bridge, “A Bad Thing” is full of lingering, sorrowful notes that will pluck at even the most hardened heartstrings.

As a MV, “A Bad Thing” has quickly jumped onto my Favorites of 2015 list. The styling alone far outstrips any and every other MV in terms of classy and elegant sexuality. The little black rompers paired with chunky jewelry, the lacy corset tops, the mesh dresses ; it’s all amazing. The frequent use of black-and-white is just the cherry on top.

The MV also gets some major kudos for achieving a tricky balance with its sexiness. It is extremely sexy without dipping into being exploitive. It’s very easy to fall over that boundary when filming sexy anything, to see a beautiful woman like you would a beautiful painting: a stunning, mesmerizing object,  but an object nonetheless. “A Bad Thing” does flirt with this line, with some shots focusing on their crotches to the exclusion of their faces. 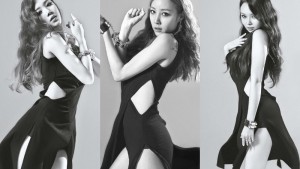 Ultimately, though, “A Bad Thing” treats  Geonhee, Eunyong, and Wooyoung as people, and even when the camera focuses on their sex appeal, it never forgets that they are people first and foremost, with feelings and dignity. Their faces and emotions are the highlight, and any sexuality they exude is an element of their story, not the point. They are women who are sexy, not women who are only sexy.  And thank god for that, because if there is any subject that should not be sexualized, it’s this.

Let’s not beat around the bush: “A Bad Thing” is about an abusive relationship and the struggle of trying to get out. Those chunky bracelets ? Stylish handcuffs. The bad thing their boyfriends are doing? Psychological and physical abuse.

Just to be clear, domestic abuse is not a simple thing. It’s not a matter of “he hit me, so I need to get out”. It is psychological and emotional just as much, if not more, as it is physical. Most abusers get their victims to internalize the abuse, which is reflected in the chorus of “A Bad Thing”. Purfles admits that they simply take whatever poison their boyfriend throws at them, at first trying to say that they and their boyfriend are the same. By the repetition, though, the blame is where it belongs: on the boyfriend.

“A Bad Thing” represents the psychological state of an abuse victim depressingly well, from the lack of energy to the evidence of disapproval of their friends and family. Yet even awareness that they are in a bad relationship doesn’t make leaving easy 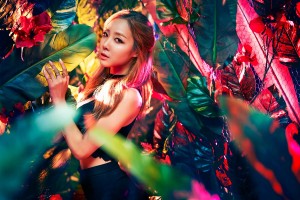 The MV backs this up through Geonhee’s story line in particular. All three have abusive boyfriends, shown by how anytime they’re together the ladies are clearly scared or pacifying him.

Only Geonhee, though, is able to put up any kind of resistance to the implied verbal abuse, but even she backs down when her abuser gets physical. In the end, Geonhee leaves a note, gets in her car, and drives away — only to pull over and break down, leaving us to wonder if she’ll have the strength to go forward or if she’ll go back.

“A Bad Thing” is a great song and well-executed music video that will hopefully shed light on a topic, that, quite frankly, can never be too discussed. More than that, it’s tasteful, representing the struggle, internal and external abuse victims go through in their attempt to get out without ever once crossing the line into “doing this for the publicity.” Purfles has hit a grand slam here, and hopefully their message will wake a few people up.