Queen Hyuna Returns with "Because I'm the Best" 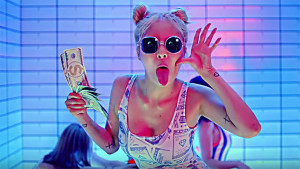 “Because I’m the Best,” or “Roll Deep” if you’re going by the official English title, is the leading track from Hyuna’s new album A+. The song is an unrestrained celebration of the self and a big ‘in your face’ from Hyuna to her critics.

“Because I’m the Best” bears many similarities with 4Minute’s “Crazy,” which is no surprise as the production team behind the two songs is the same. In “Because I’m the Best,” Hyuna carries on the concept that she has always been known for, one that is unapologetically self-confident and criticises those who are jealous of her.

The synth-heavy production has a few hip-hop qualities to it, but is definitely still a party track, giving Hyuna the perfect platform to confidently brag about herself without the song feeling like “Crazy 2.0”. When the song opens, the beat is catchy, but the momentum falters slightly when we reach the somewhat generic chorus.

The MV for “Because I’m the Best” opens with Hyuna controlling her masked backup dancers with leashes, and later, she is seen cracking a whip at them. Although these image are unsettling, they are used to make the point right from the beginning that Hyuna is the queen who has power over others. 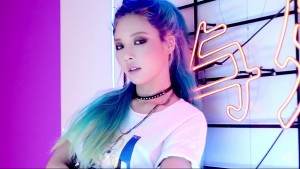 Hyuna is playful in the chorus, singing “You can’t touch me, don’t touch me,” poking fun of the fact that she is desirable to so many, but also unattainable for most.

It is easy to think that the song is simply a boast-track, but when looking at the lyrics, it becomes clear that Hyuna is really taking ownership over herself. No matter what she does, being in the public eye means that people always feel like they have the right to criticise her:

I’m always alone here
On top of the chopping block, I know
Chew me up when I smile

Here, Hyuna seems to make the point that since you can’t seem to please people by being sweet, you might as well go all out and be exactly what you want to be, which is what she does by taking back control. 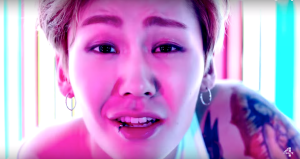 BTOB’s Ilhoon provides a refreshing rap breakdown with some great lyrics that back up everything Hyuna has just said about herself. Ilhoon playfully says that they’re both pretty much perfect, except that they lack four things: “Time, likeability, fear, fat.”

Ilhoon then discusses his relationship with Hyuna as a way to reveal the duplicity of his critics, but also to show his respect towards Hyuna and how far she has gone in the industry:

I have everything but height
But they all open the door for me
They call me fake, saying I’ve never been real
But HyunA, who you can’t even hold hands with?
She’s like a sister to me

The MV blares with neon colours, reminiscent of a club. The styling in the MV is fantastic, with Hyuna experimenting with a few different looks throughout the video, rocking everything from braids, to buns, to a straight fringe. Hyuna’s outfits are edgy but casual, such as the dollar-bill one-piece which is bound to become a trendy item in the K-fashion scene. 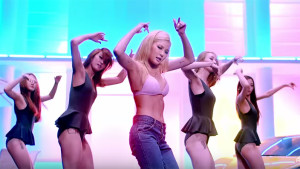 Hyuna’s performance skills have always been charismatic and fierce, but in this song, her rapping has also clearly improved, making the song more enjoyable to listen to overall. 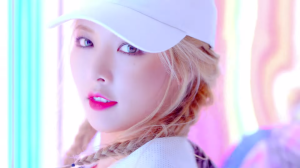 “Because I’m the Best” has joined the increasing number of songs by female artists that assert their dominance and take back ownership over themselves. The title of this song, “Because I’m the Best” and Hyuna’s styling of herself in it as a queen of course bears a resemblance to 2NE1’s “I am the Best,” and leader CL’s title of being the queen of K-pop.

This is a positive sign, with more and more artists unashamedly taking back control of themselves from society, the media, and countless anonymous entities on the internet who feel the need to critique everything.