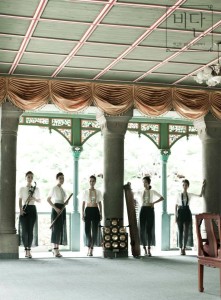 I don’t pretend to know much about traditional Korean music; however, I can appreciate the culture aspects of it and the earthy tone that colors it and makes it something not only to respect but to really marvel at. What really impresses me is a group that manages to take a decidedly modern construct and fuse it with a more traditional foundation to create something truly remarkable. Mirrorball Music band Bidan is one such group of musicians that’s managed to do just that effortlessly and with a great deal of enthusiasm.

The group, comprised of musicians Kim Yoo-bi, Yoo Ri-ra, Yoon Ji-hwi, Jung Da-hwi, and Jung Hyu-eun, is what I’d call a conduit of Korean history. Their music is so powerfully connected to the history of their country that I’d almost go so far as to say if you want to learn anything about the culture, skip the K-pop and head straight for this band.

Though they’ve been active at least in part since 2010, it was last year when they brought their music to the public’s attention. Opening New Age was a powerful piece of music, a beautiful combination of traditional instrumentation and modern ideologies. These women are a force behind their instruments, and with the help of some stellar vocals, their debut album was the perfect marriage of power and elegance that makes up traditional Korean composition. Opening track “Standing on the Bow” is an explosive introduction to the band, not only making heavy use of the drums and traditional strings, but wrapping those traditional sounds around a somewhat futuristic foundation.

It leads perfectly into the title track, the first song in which we hear the musicality in the lead vocalist’s expressive voice. She adds fire and vigor to a sound that manages to be at once energetic and soothing, a dichotomy most verily felt in the following track, “Waltz of Moonlight,” and an aspect of their music that first endeared them to me when I listened through their debut offering.

It isn’t simply the way in which they manage to inject a bit of modernity into their traditional makeup. Bidan’s incredible musicianship allows them to create art that’s both thrilling and emotional. Their’s is a brilliant canvas, painted in swirls of pale blue and pink, moments of crisp green and bright red, splashes of purple sewn into each scene to give the listener something quite heroic in sound, as in track “Whispers of Love.” 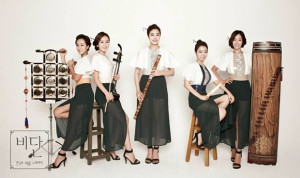 The band’s rendition of “Arirang” is testament to that use of varying hues to color their music. It’s undoubtedly richly traditional; however, the smoothness of the composition and the airiness in the notes nod to the type of pop music that started to crop up around the late ’80s in South Korea.

What’s so amazing about Bidan is their dedication to spreading the history of their country. They’re fiercely proud to be Korean, and their love of their country permeates the music they make. They go so far as to call their albums “Docu-concerts,” a musical experience meant to both entertain and educate. Their latest history lesson, single White Miracle, tells the story of the first female Pottery Official of the Chuson Dynasty.

The music is lush, rich with the complex sophistication inherent in the band’s sound, a more pop-inspired composition meshing effortlessly with the traditional elements of the song—gorgeous string arrangements, the breathy sigh of the flute, and the aching warble of the haegeum. Their desire to educate their listeners is so integral to who they are as a group. The song and the story that inspired it has been translated into English, Spanish, French, Japanese, Chinese, and three other languages.

I first came across Bidan by accident, letting Mirrorball Music’s YouTube channel run on autoplay one day while cooking. When I heard the unique fusion of pop and traditional, I was so mesmerized I had to dig deeper. There’s a certain magic about the group that captures you from the moment you hear them and never lets you go. It’s a sound that is both incredibly modern yet tied tightly to the traditions of the past. Their pride and determination to educate the masses keeps me hopeful the group will continue to give the world music that weaves elements of the past, the present, and the future.