Fashionable Innocence in Kisum's "You & Me" 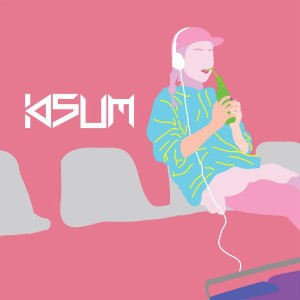 Despite how I enjoy thinking philosophically about the beauty of song lyrics in hip-hop, I must admit my unfamiliarty with the genre. Even though I have briefly listened to a few MFBTY songs and albums as per recommendation, I believe that further introduction to K-hip hop is needed to solve this issue (and for any readers who are encased in this pickle with me).

Hence something prismatic, playful, and pretty will be a good guide into the multi-doored universe of K-hip hop; for this task Unpretty Rapstar’s talented rapper with idol-esque looks, Kisum, has risen with her return to the K-hiphop scene.

Her single titled “You & Me,” featuring Joo Young (whose suave vocals have been echoing in my head since “Erase”), was released on July 23rd. It led me a step closer to the enigma ofK-hip hop with its smooth synth underlay; Kisum’s muted yet mindful rapping; the peaches-and-cream cinematics; the sweet pace of Joo Young’s bridge, and; the measured way in which the vocals and rap accent each other. 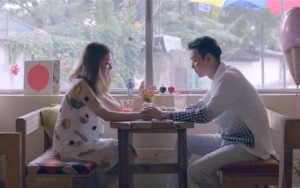 Kisum might have been recognized for her sassy image, and “You & Me” appears as obvious attempt to counter that and show off her more feminine side. If one observes carefully though, the song and MV preserve bits of aloof haughtiness without transforming into maudlin or glamourized portrayals of love, but still implement the budding romance concept.

In this way Kisum retains her popular image, but also subscribes to the newer image projected in the MV through her expressions. They ingeniously fuse shyness, reserve, and awkwardness with mischievousness, loftiness, and boldness. The MV shows Kisum’s exclusively personal approach to her new image through her expressions, while the song lyrics present “You & Me” as a softer and more delicate memo.

Through the lyrics, Kisum offers a gaze into the subjectively intimate experience she has when seeing the one she likes. Angst and excitement socialise with one another, creating a balance between reality and the forthcoming end of her dreamy daze — “you make me high, you make me smile”  — in which the love she feels inspires her to reach out to the owner of her heart sans hesitation — “between us, it’s pretty serious.” Likewise Joo Young, as Kisum’s love interest (and maybe even her best bud, as the MV alludes), responds through reticence but explores his feelings subjectively with exclamations of his loneliness and insomnia. 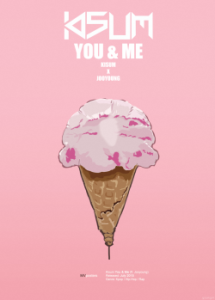 Both individuals recognize that there is something going on between them, and Kisum’s crystalline rap delivers the more tumultuous and troubling aspects of falling in love, while Joo Young’s vocals serenely discuss the emotional and enamouring aspects of the same. Either way, Kisum eventually holds the happiness and anticipation her amorphous love brings her in her hands, and reaches out with sureness to make it a reality.

In terms of the cinematics, the MV is a composition similar to many this summer and even reminds one of San E’s “Me You” featuring Baek Yerin of 15&, in which summer is the sentimental center of all emotions, whether worrisome or wonderful. Although “You and Me” does not fully use the summer love concept, it definitely materializes as a very warm and private look into Kisum’s heart.

The pastel setting and costumes Kisum is decked out in embody a sort of fashionable innocence, where she is at the passage of womanhood and the only thing holding her back is a confession of her true feelings. The candid focus on her face and eyes emphasize an ambience of shyness and childishness, while her confrontation with Joo Young imparts certainty and maturity; that she will make sure things work out for them.

Thus it is Kisum in “You & Me” who has given me feelings of comfort and hope for myself and K-hip hop, a simple song with soft colors that sounds budding love without too much sauciness is the solution to any malaise. “You & Me” is friendly, relatable, and cheerful as it demonstrates Kisum’s ability to take on a persona everyone expects of a pretty girl like her without abandoning the independence and boldness that makes her a star rapper. “You & Me” is a great song for avid fans who enjoy the soft sentience of K-hip hop and also for individuals like myself who are taking their first steps into the genre!