Sonamoo Soften Up with "Cushion" 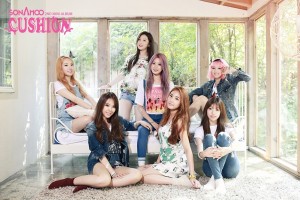 Groups are always evolving, experimenting with new concepts and developing their signature sound, especially when they’re in the rookie stages. Sonamoo is one such group, who have returned with the song “Cushion” after debuting last year with “Deja Vu.” Being a rookie group, Sonamoo is still attempting to establish their musical identity and gain a serious fan base, and have been experimenting with a few different sounds.

When they first debuted, amid a fair bit of controversy, Sonamoo were eager to establish themselves as something new in the girl group scene. Their debut single, “Deja Vu”, was supposed to show an edgy look and sound that girl groups rarely ever dabble in. Although this effort was commendable and the girls definitely had skills in the dancing and rapping departments, their album Deja Vu failed to carry on a strong theme, and instead resulted in a very confused sound. The challenge for the group from here on in was clearly to craft a specific sound and a genuine image that would be unique to the group, but also didn’t seem as forced as the BAP-esque vibe of “Deja Vu.”

Enter their latest track, “Cushion.”At first glance, the MV and song may disappoint viewers, as it feels like the group has given up on the edgy style that they initially debuted with and have instead resorted to the typical cutesy, colourful videos that we always see from girl groups. Upon closer inspection, though, this song actually carries on the softer theme that we saw in the rest of the Deja Vu album, making it a much more coherent addition to their discography. Enough of Sonamoo’s signature touch has also been retained in “Cushion” to allow it to stand out from the crowd while also appealing to the crowd.

In this way, “Cushion” is a development of the group’s style, as they try to strike a balance between doing something different, but also trying to appeal to the masses who love their sugary pop music. The girls show off their cute personalities and great visuals, but also showcase some acrobatic choreography and much-needed rap break downs. 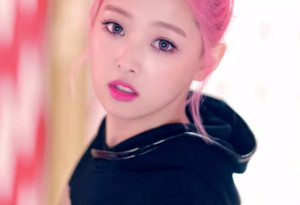 Although Sonamoo’s change in sound is understandable and even necessary for the group’s success, in this case, the producers may have gone a little too far. Many have pointed out the similarities between “Cushion” and Red Velvet’s “Ice Cream Cake,” with TS Entertainment trying to capitalise from the quirky-yet-catchy approach that gained Red Velvet a lot of fame.

“Cushion” is a good direction for Sonamoo to go in, and although the song is not incredible, it is still at a coherent cacophony of sounds. Each individual section holds its own, allowing the verses and choruses to flow really well into each other.

Sonamoo do have decent vocalists in the group whose airy voices suited “Cushion” much better than “Deja Vu,” where their voices seemed lacking in comparison to how energetic the track was. Despite a good effort from the vocalists, lead rapper D.ana stole the spotlight, partly because she has significantly more lines than the others, but also because she really knows how to deliver in her sections. She delivers her verses with attitude and a distinctly deeper voice, making her a highlight of the song and MV. 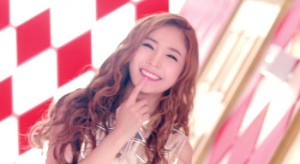 Visually, the MV is the complete opposite of “Deja Vu.” Where “Deja Vu” was sultry and dark, “Cushion” is instead garishly bright and cute, with plenty of hot pink, purple and bright blue assaulting the eyes. The plot line is unclear, with the girls seemingly being transported to an unknown world and trying to get in touch with each other again. When they’re finally reunited, there is of course no better way to celebrate than with a pillow fight.

One area in which this song does not disappoint is of course its embarrassingly nonsensical English lyrics. Like the song title suggests, the lyrics compare a love interest to a cushion, to illustrate the point that he is as soft, white and fluffy as a pillow. The chorus continuously repeats the awkward-sounding line “He’s like cushion,” and the English lyrics get even more uncomfortable later on with the lines “Feel so right, touch the guy, feel so tight, day and night.” 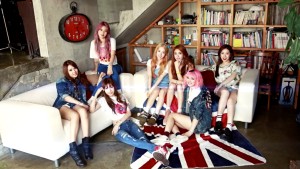 On a more serious note, D.ana stresses that she won’t be pushed around by a guy, rapping that: “Even before the scars heal, I’m off to find a new knight.”

Although awkward lyrics are nothing new in the K-pop world, these lyrics in particular stand out, making it hard to singalong and not cringe while listening to the song.

“Cushion” is not the song that will propel Sonamoo to fame, and it also does not showcase the members’ skills adequately, but it has at least allowed them to work out which direction they are going to go in with their sound and look. Hopefully this will help them solidify an image in the public consciousness, and from here on, create songs that are unique to them.