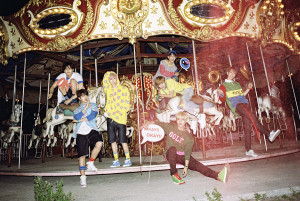 Amidst this year’s summer mini-albums, JYP’s latest batch of pretty boys returns with their third release, Just Right. GOT7 certainly turned heads with the release of their cute nod to body positivity, bringing a little something unexpected to the party of typical summer jams. But while the album starts strong, it sort of settles into what we’ve come to expect from most summer tracks: formulaic pop meant for partying.

The album opens with title track, “Just Right,” a song whose message is pleasantly positive and reaffirming. It’s very rare that we get K-pop songs, particularly coming from idol groups, that dare to allow their listeners, especially their young female audience, to feel good about themselves, shirking the strict standard by which society judges them.

Musically, it’s incredibly catchy. The coos and repetitive chorus work perfectly for the song’s intended audience: a younger demographic of listeners who are impressionable and open to any and all suggestions their idols push their way. I’m not particularly fond of the cloying sweetness and excessive brightness of the music, per se. However, I can most definitely appreciate the use of a sound that attracts an audience and then dares to reaffirm their existence, doing such without the use of dark theatrics and a maudlin music video painting a portrait of characters self-harming before coming to the realization they’re worth more than what the media says they are.

While musically it’s a bit infantile for my tastes, the lyrics are very straightforward and descriptive, explicitly telling the listener that there isn’t a part of her that our protagonist can see as imperfect.

Mirror, mirror please tell her
Scale, please tell her too
That she doesn’t need to change anything
That she’s pretty and perfect just as she is right now

The message in that statement, that our leading lady (or fellow, as it may be) is absolutely perfect in the skin she’s/he’s in, is so powerful. Barring any bemoaning of the song’s composition, this summer jam is such a treat in the sea of bubblegum we’ve had to wade through for the past couple months.

Following the body positivity of “Just Right,” it’s back to regular programming with track “Before the Full Moon Rises.” With the socially conscious track out of the way, we get back to the business of creating a fun summer album. The song is your typical summer love track, a cute story about a young man who’s fallen in love and laments the passing of time:

When I’m with you, time goes too fast
It hasn’t been long since we ate and drank tea
But it’s already 11:30, getting close to the last train, I’m so sad

Musically, it’s just what you’d expect from an upbeat love song: sweet, catchy, hopelessly similar to everything else. If this type of cutesy OST-style track is your brand of candy, you’ll be in love with the easy vocals and laid-back rapping of Jackson and BamBam. The song’s formulaic construction becomes problematic when factoring in the following track, “My Whole Body Is Reacting.”

Though the song’s story differs ever-so-slightly (instead of lamenting his lover having to leave, our protagonist explains how he fell hard and then was more or less betrayed by the one he gave his heart to in a fit of adolescent infatuation), the construction of the vocals and the actual song composition are very similar. It’s a bit unfortunate that there isn’t much to differentiate this track from the one preceding it. The almost alarming similarity in the songs leads one to believe that in terms of album construction the production team just got lazy. If not for the obligatory space between songs, I’d believe I was listening to an unnecessarily long song dropped in at the beginning of the mini. 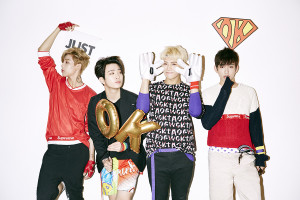 “Nice” seems to signal a turn in musical theme. It’s your typical club banger: heavy bass, buzzing synths, liberal use of the drum machine to keep time with the repetition of words “she’s nice.” It’s not necessarily a track apart from any other hip-pop track out there.

It’s got a hard enough sound to purport to be edgy, but it’s pop enough to be safe for kids to dance to without mom and dad being concerned. This sort of G-rated R&B lends itself pretty easily to the typical lyrics of a female who’s caught our protagonist’s gaze: “She captivated me at first sight. She’s so pretty, I can’t take my eyes off her. I’ll go to you and I’ll show you what I got, yeah. If I’m with you baby, I’ll go anywhere.”

As “Nice” was the soft introduction of Just Right’s second movement, the next track adds more of that hard edge to the pop sound cultivated throughout the album. Opening on the vox-modified question, “Why you hatin’, man?” “Mine” makes use of syncopation prevalent in most club tracks à la songs like Crush’s “Hug Me.”

Though we have another instance of songs sounding pretty similar (and being thus in terms of musical theme), this song’s construction is the album’s most interesting, focusing on both sides of the clubbing genre: the bass-heavy crunch of rap tracks for the verses spilling into straight-up synth-pop in the chorus, a slight alteration in the synthesizer and a three count on the drum machine right before the chorus providing the transition. The shift in musical direction is relatively smooth and does add a bit of something unexpected on an album that’s pretty one-note up to this point.

Lyrically it gives us just what we’d expect from a song with a title like “Mine.” Our protagonist, feeling his territory threatened, issues a warning, but not to any dude who’d try to step up to what’s his, rather to the girl he’s decided belongs to him: “Don’t look anywhere else even for a moment. I can’t just watch, I can’t lose you. I have to be the only one next to you. Cuz You’re mine, you’re mine, you’re mine, you’re mine.” How perfectly droll, a “Me Tarzan, you Jane” club smash for the kids.

We go from the earnestness of “Just Right” to a song in which our leading man basically informs his love interest that he owns her. It’s summer; let’s not get too wound up in the semantics of this track. Let’s leave it at what it actually is: a typical ego trip lacking in any lyrical depth that gets a little close to obsessed lover territory.

It’s no wonder our protagonist is now begging for his girl to come back to him. After a song in which he basically tells her to her face that he owns her, I’d say she’d be none too chuffed about the prospect of staying.

“Back to Me” brings us full-circle, another cute song with a typically bright composition. Underneath that sunny exterior, however, we have a song in which our male lead begrudgingly admits that, okay, maybe I treated you not as good as you probably deserved. He explains he just wasn’t being himself, that he truly didn’t know what he wanted in life. Now with her gone, he wants her back. The song goes the way of whining and begging really quickly, the chorus a barrage of “I want you back, please, please, I can’t live without you.” Then he goes the way of exaggerated flattery:

OK I don’t care about anything, I don’t need anything
Even million dollar bills and those classy watches, fancy rides
Everybody twenty four seven! Maybe other girls are pretty
Tight mini skirts, expensive purses
Bodies like bam bam bam but
How can anyone compare them with you?

While our young male lead was on his yellow-brick quest for self-identity, one can only guess if our leading lady decided to actually accept his apology, especially since the final notes of the album are him still begging for her to come back. All I can say is, don’t do it, girl. He may have lured you in with pretty words proclaiming how flawless you are in his eyes, but he’s a bit too obsessive and clingy for as hot as it is this summer.

Let’s see, a typical summer pop album with average vocals, average rapping, and average lyrics. Musically the album is so-so. The integration of synth-pop throughout Just Right, though certainly perfect for summer, makes this album rather flat. Though a summer mini-album may not be the place to try to add a bit of creativity to one’s sound, it would help if every song didn’t sound so hopelessly the same. 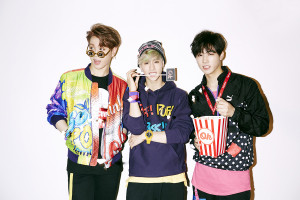 Though I applaud opening an album with a song (and thus lead single) that’s meant to spread the message of confidence in one’s self, it does leave the rest of the album open for deeper scrutiny, unless, of course, your main concern is just some summer tunes to drive to the beach to. It does deliver on that front, giving fans of the group a joyful, though saccharine, listening experience.

For my money, Just Right is an album in which you probably need to already be a fan of the group to really be excited. In the end, all the songs just blended together, tracks melding from one to the other with just a few seconds of silence denoting song transition. On the surface, that may suggest a thematic cohesion, but really all it does is make the album incredibly stagnant, hitting one note and riding it for the album’s duration.

There wasn’t anything intrinsically interesting in the tracks, with the exception of the much-needed and appreciated positivity in title track “Just Right.” Save for a couple interesting choices from the album’s composers, there’s not much here to get me into the group.