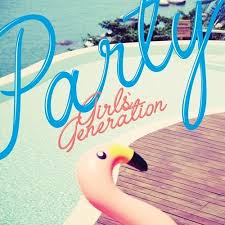 Summer has brought the girls out full force this year, with a huge amount of girl groups releasing music for the season, including Girls’ Generation. While this is not their first song since the departure of Jessica, this is their first full promotion without her, and that presents a new hurdle for K-pop’s favorite girl group. Sadly, “Party” is an incredibly lackluster new start for the ladies.

“Party” is unquestionably a summertime anthem. Everything about this song, from the vocals to the instrumentals to the lyrics is so very bright that it could never fit any other time of year. To the credit of SM Entertainment, they chose to highlight the brightness of the song in the MV, letting Girls’ Generation out of their boxes and off their sets for a fabulous beach MV. This was a perfect choice, as “Party” is one of the best-looking MVs of summer 2015.

The visuals of “Party” match the vibe of the song completely. Girls’ Generation spend the whole MV kicking back on a beach so stunning it has me reaching for my passport and car keys. Sand white as chalk, perfectly turquoise water, clear skies with a sprinkling of clouds, and cocktails. Unlike other summer releases which have drowned themselves in effects and decorations, “Party” understands the background is beautiful and to not overpower it, but to let it be while we wish ourselves there. 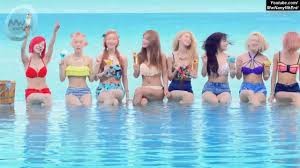 The visuals of Girl’s Generation themselves have taken a sharp turn towards bright with “Party” as well. Girl’s Generation is almost always a solid block of long, dark hair, with a couple token blondes and maybe a bob. Here, some major style risks have been taken, but they all pay off.

Not only do they look fabulously summery, each and every member looks just plain fabulous. Sunny‘s Little Mermaid-esque locks, Sooyoung and Hyoyeon‘s bob cuts, Yoona‘s blonde dye job, and Taeyeon‘s pink tips are stunning departures on their own, but together, it creates the feeling that “Party” is a new chapter for Girls’ Generation. 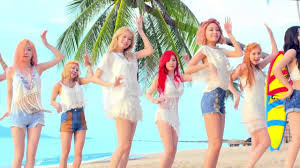 That said, while “Party” is a knockout on the visuals, it falls short when it comes to the actual song. It’s bright and summery, but there isn’t anything here to make “Party” stand out from the glut of summer singles. The instrumentals and vocals are clean and crisp, almost to excess. It leeches all the color out of Girls’ Generation’s vocals and turns them tinny.

The lyrics are bland, and commit the sin of failing to create context. Namely, why are they partying? It is the weekend? Is it a girls’ night? Are they on vacation? Is it Tuesday? But no reason is given. Girls’ Generation are partying just because, and that makes “Party” feel like a hollow shell of a song.

“Party” is too effervescent to be called generic, but neither does it wow me. I can so clearly see the clean, fun song that was attempted that it hurts to point out how much it fails to achieve its goals. If I was scoring a movie, “Party” is what I’d want in the background — fun enough to color a scene, but not so good that it’ll distract from the story.