Big Bang is Anything but “Sober” in Its Latest MV 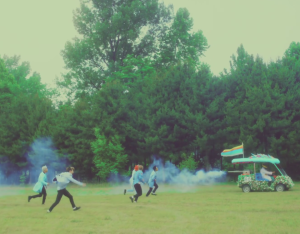 Big Bang released the ‘D’ of their MADE comeback on July 1st. Despite being comprised of the two singles, “Sober” and “If You”, it was only paired with one MV; the MV for “Sober”. With “If You” climbing higher on the charts, was this a mistake or for the better?

With the title of “Sober”, you would think that the song would have a sombre tone. Yet, this song and MV is possibly the furthest away from sober and sombre you could get.

“Sober” is an infectious dance track that pushes you to get involved in it, whether it is tapping your foot or waving your hands in the air like you just don’t care. The catchy electronic melody immediately grabs your attention while the drums drive the song forward as if it is searching for new heights in the song. These heights are fully realized in the chorus as it steps things up with the introduction of lots of different instruments. They all clash together to create a buzzing atmosphere that blocks everything else out. It is clear that if they want to heard over that racket they are going to have to yell and that is what they do.

Even better , the song invites you to join in, especially at the end where lots of different voices yell out the chorus. This is the song to let out all your frustration on. Dance, sing and have a good time.

Most fans would be used to Big Bang’s psychedelic MVs and “Sober” isn’t different in that department. With the use of hallucinations in the MV, it could even be said that “Sober” takes that even further. However, in true YG style, the MV takes the song’s meaning and adds another dimension to it in the MV. As each member details their struggles in life in the song, it is played out on screen as a struggle between reality and dreams; they are all looking for an escape. 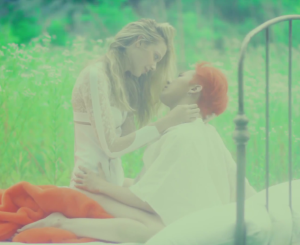 G-Dragon’s narrative is focused on the absence of something in his life, symbolized by an empty bed in a white room. The white room is usually representative of reality and for GD, it is a place where he is bored and apathetic.

This heavily contrasts his hallucination where there are many beds in a field and he is incredibly hyper as he runs around to all of them. This could be representative of a search for something more than what he has in reality. However, as he has never known more than his reality, he thinks more of the same thing will fill that gap.

At the end of the MV, we see one bed occupied by two people; a woman and GD. It is clear that he has figured out what he really wants, as in reality he is lonely. Though if he was really lonely, I don’t think he would’ve butchered all those muppets to put on his sweater. Anybody else getting Cruella De Vil vibes?

Seungri searches for fulfillment in a world that values money, power and fame.

If you only chase after money, power and fame
Your crotch is gonna rip and you’re gonna fall
They say love is good, friendship is good
But be warned, the back of your head might be in pain

In the MV, Seungri swaps between two scenes in the white room where he is grabbing at nothing and then desperately grabbing at pieces of paper that say ‘this is your god’. What he thinks he is grabbing becomes clear with the introduction of a third scene where he is seen grasping at money in the hallucinated world of the forest.

The two scenes in the white room indicate his conflicting perceptions on the issue; is money all there is or is it nothing? Seungri’s judgment becomes clear in his final scene where he is running away, seemingly searching for something else.

T.O.P is an adult who is still a child at heart, and wants to live out his childhood fantasies. Think Peter Pan if he was forced to grow up.

If anyone doubted that T.O.P was the weirdest member of Big Bang, this MV would set them straight again. With him jumping on giant bubbles, pretending to be a goat and then using dragon ball techniques to flip a car, it’s hard for anyone to come up to his level of weirdness. However, a lot of us would be reminiscent of this sort of behavior as something we did when we were children. This is a representation of his want to be a child, where anything was seemingly possible. 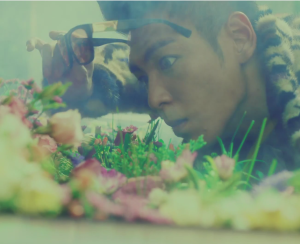 Furthermore, the words ‘I choose to believe’, as children often do, is written on the tank in the background and in the hallucination every thing is possible. However, the adult reality is less rewarding of this belief as it is incredibly bleak, with only a rocking horse and a tank in it.

Daesung has so many things he has to do, but none of these things are what he wants to do. As a result his reality is filled to the brim with clutter as he tries to write a book. You can see the frustration he has with writing, a quiet and contained action, when he throws pages up in air. What does he really want to do? Be unrestrained and free to do whatever he wants. Which is of course playing the drums, as a loud and invigorating action.

In these scenes Daesung’s demeanor becomes instantly brighter and his smile infectious; it is clear that this is what he wants to do. Daesung brings life to this MV; he just completely inhibits the vibe of the song with his energy and humor whether he is dancing or singing. He is one of those people that seems to be constantly living in a dream.

Taeyang, though, deviates from the norm in his story; he is trapped in his hallucination and is searching for a way out. The dream is represented by a glass in a forest that is filling up with gas. He is unable to escape from the fumes, as the glass walls are too high. Even when he tries to approach a place of security in the dream, a police car, the inside is still filled with gas. 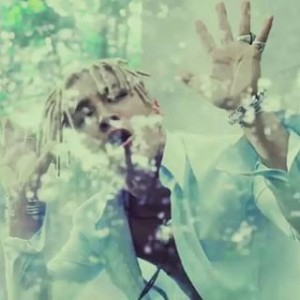 This is similar to the lyrics where he calls for a doctor to help him. Whether this story line is representative of living a dream that didn’t turn out like he wanted, an actual addiction or something else entirely is up to the viewer. However, Taeyang is thrust back into reality at the end of the MV, showing that there is an escape for everyone.

The meaning to all these hallucinations is simple: even if you have to struggle, just follow your dreams – or a golf cart that sprays hallucinogenic gas. The MV is both visually and mentally stimulating from beginning to end. You never knew what was going to happen and every replay reveals something new. This is the sort of high quality MV that is expected to come from Big Bang.

“Sober” was everything I wanted from a Big Bang that I had been disappointed in with their previous releases; specifically, there is no disparity between the song and the MV. It is daring, infectious, quirky and symbolic. “Sober” is anything but sober and you can bet that I will be trying to sing it at the top of my lungs when slightly intoxicated.

So did this release sober you up or down? Would you have preferred it if Big Bang did an MV for “If You” instead?