BTS Flaunt their Character in "Dope"

Fresh off their brand new album, The Most Beautiful Moment in Life Pt 1, BTS have surprised fans with a simple but effective video for the energetic track “Dope.”

In many ways, the recent “I Need U” was quite different in both its tone and the style of the MV. Although this was a brilliant change of direction for BTS, “Dope” gloriously returns to the style that the boys are known for. The video oozes character, the beat is infectious, the lyrics are outrageous, and perhaps most eye-catchingly, the choreography is a powerful showcase of what BTS can do.

Musically, “Dope” is an energetic and attitude-filled song, reminiscent of other fun songs like “The Rise of Bangtan” and “Paldogangsan.” “Dope” is a celebration of youth, allowing BTS to simply have fun and flaunt their talent. Buoyant brass instruments carry the chorus, and the song remains exciting even in its slower tempo parts. It’s impossible not to tap your foot or bop your head along to the beat as it rushes along.

“Dope” has long been a fan favorite from The Most Beautiful Moment in Life Pt 1, but this MV has really taken it to the next level. The MV begins with leader Rap Monster leaning into the camera, directly welcoming the audience, just in case they’re new to BTS. Here, Rap Monster reaches out to their many new fans, as well as all the people who have heard enough about the group to pique their curiosity, but aren’t devoted A.R.M.Ys yet. 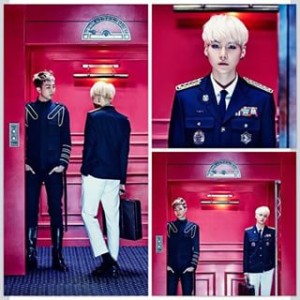 Each member seems to represent a different profession, with some of the most obvious being Jungkook as a policeman, Jimin as an office worker, J-Hope as a race-car driver and Jin as a doctor. This can either be taken as their affirmation that they can be anything that they want to in life, or alternatively, that they’re breaking away from traditionally accepted but often dull jobs such as working in an office.

The popular ‘one-take’ trend is implemented well in this MV, panning between the members to show their different lifestyles and careers, but also being extremely useful in highlighting the choreography when needed. The setting is confined to a box studio, but it works fairly well because the members are segmented into different parts, which the camera pans across.

The camerawork is brilliantly nuanced when it comes to drawing attention to the intricacies of the choreography, such as going for an aerial view to focus on the little head bops the members do at one part.  As usual, the members smile throughout the entire video, which in turn makes the audience enjoy the MV even more. 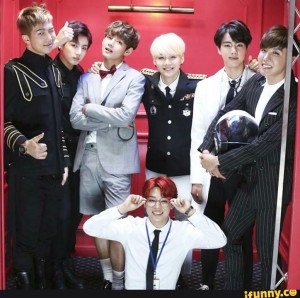 The choreography is by far the strongest part of the entire MV, as it plays to BTS’s usually strong and energetic style, but also packs a lot of attitude, personality and playfulness. If there’s one member who steals the show in this MV, it is definitely Jimin, who hits every move with strength and charm. An honorable mention, however, also needs to go to Suga, who has improved so much that he is now at the front of many of the dance formations.

Fast footwork is a notable part of the choreography, and arm movements are paired brilliantly with the melody of the brass instruments. The final few seconds of the MV is one of the coolest moments of the MV, where the brass hook is the only thing you can hear, and the choreography smoothly and perfectly matches it.

In many ways, the lyrics are typical of the hip-hop genre, spitting on the competition and endlessly praising yourself. In the chorus, the members unashamedly shout “I’m kinda dope!”, celebrating their own awesomeness.

However, they also show just how hungry they are for success, as the boys detail the sacrifices they have made to get to where they are. One line that is repeated to emphasize this is: “I worked all night, everyday, while you were out clubbing.” Suga insists that all this is worth it, rapping that “Even if our youths rot away in the studio, thanks to that we’re closer to success.” The boys burn with determination, yelling out that they “reject rejection.”

Rap Monster lets his frustration at the older generation out, rapping that “The media and grown-ups say we have no will, denouncing us, why are they killing us before we even try?” This makes the great point that the very people who urge teenagers to achieve things in life are the same people holding us back.

The latter part of Rap Monster’s verse, however, makes sure to leave the audience with a sense of hope:

Keep your head up, take my energy, energy, energy. Don’t give up, you know you’re not lonely. Our dawn is better than our days. So can I get a little bit of hope? Wake your sleeping youth and go! 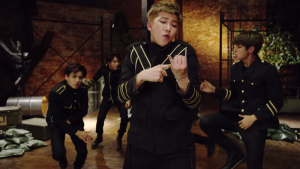 As always, BTS have given their largely young fans something worthwhile to think about. Their relentless determination and passion for their craft comes through in the lyrics, and leaves a lasting impression on the audience. “Dope” serves as a celebration of youth, and an encouragement for those struggling to achieve their dreams. The message is especially impacting thanks to the strength of the MV and its riotous and punchy choreography.