K-pop Throwback: Death Can Be Beautiful in 2NE1's "It Hurts (Slow)" 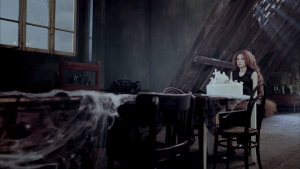 Barring my own thoughts on 2NE1, no one can deny both their influence and their impact on K-pop since their debut in 2009. With the passing of their six-year anniversary, it is only fitting we take a look back at their career and one of their most highly revered music videos. If nothing else, one thing we can always say about YG and 2NE1 in particular is they certainly don’t lack for creativity when it comes to their visual representation.

Back in 2010, the ladies of 2NE1 made a statement with one of K-pop’s most visually striking music videos, “It Hurts (Slow),” from their first full-length album To Anyone. It’s fitting the MV was released on Halloween. The video’s overall aesthetic was Addams Family meets The Corpse Bride. One could argue the video fit perfectly with the song’s theme of love dead and gone, a relationship forever stripped of its magic to the point that our crestfallen heroine doesn’t even recognize her lover as hers anymore.

The “acting,” such as it is, isn’t much to write home about. The girls produced the right amount of pouting melancholy to get the point across. The story focuses on Dara and her inability to let go of the man in her life, a strikingly gorgeous Lee Soo-hyuk. It’s as simple as the emotions behind it are complex. A woman, presumably left abandoned and waiting for an undisclosed but tragically extended period of time. Her hair is a-shambles (as she combs through the ratted nest of Rapunzel-like locks, strands of it coming away with her brush), her clothes are worn and tattered in spots, and her eyes speak of a restlessness that only the absence of a lover can induce. 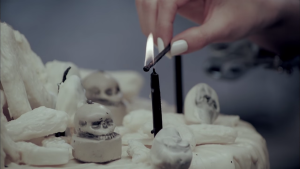 Throughout the video we see our abandoned protagonist sitting alone at a table covered in cobwebs and dust-weary linens. She’s staring vacantly at the other end, perhaps hoping sheer will and desire will call her lover back to existence. Before her is a white cake, a muted brightness in the suffocating grey dreariness. She lights the black candles, three of them, as the camera focuses on her white-lacquered nails getting lost within the frosted, sugary barrenness of the cake. It’s decorated with sugar skulls, crosses, and headstones. The black emptiness in the eyes of the skulls mirrors the cold lifelessness of our leading lady’s.

Lighting the candles sparks a flashback to brighter (albeit mutedly so) days, where the love of her life sat across from her. Is this a memory? A dream? A fantasy come to fruition? Dara runs to Soo-hyuk, embraces him with all her might, a smile spread across her face as the warmth of a lover invades her soul anew. Then she turns and notices the white cake, a single lit candle. The flame flickers, then blows out, and she’s now left to wonder: Is this the man I love? In the background, Bom proclaims “No way. I can’t recognize. You’re not mine anymore,” and Dara’s brought back to her bitter reality: loneliness, unending loneliness. 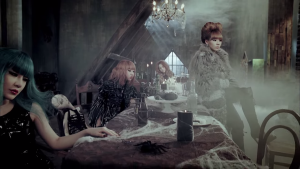 The other members act as the Greek chorus to our protagonist as she lives out her agony. They join her at her table, the camera panning down the long stretch of emptiness to reveal the phantasms that put sound and form to the pain Dara has to live through as she stays in her cold, cracked room in a state of emotional limbo. The white cake mocks her; it’s promises of marriage, innocent and pure love. The ornate design speaks of wedding vows, while the crystalline white headstones and skulls inform her that all love is dead, her love is dead and already in the grave. Her white nails are nothing more than vain attempts to clutch at the remaining bits of her emotional innocence — her soul already drenched in the darkness of death and complete absence of life around her. In the end, Dara is there, alone, clutching at her locket, the hollow echo of “it hurts, it hurts, it hurts” reverberating around her before the camera pans up to an image of dried leaves doing a macabre dance through the graveyard the ladies were serenading us in.

The song is straightforward, our protagonist unable to reconcile the pain she feels with the nonchalance of a lover whose heart and eyes have strayed to another. However simple “It Hurts” is lyrically, the true wonder lay in the vocal arrangement. The song highlights the clearness of their voices. There really is a delicateness to Dara’s voice that gets lost in much of their faster-paced offerings. CL has a surprisingly strong voice that, while a bit tinny and tending toward nasally, matches Bom’s unique tone in its presence. Minzy’s warm vocals bring depth to the sound, adding a flicker of warmth, just as the three black candles on Dara’s white cake. 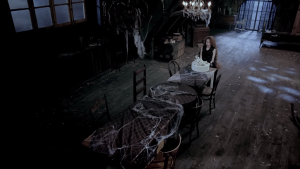 While many do prefer their dance tracks, their catalogue of dubstep-drenched songs does very little to pique my interest in the group. “It Hurts (Slow)” stands among some of 2NE1’s best vocal work, with a video that illustrates a softer side to their flashy fierceness. They’re certainly not wanting for ferocity. This costuming was flawless. Even Dara’s hair, wild as it was, served a purpose to properly frame the madness of an endless cycle of waiting for someone who’ll never come back to you. The color palette of the video, a departure from the bright lights and flash of their uptempo numbers, adds a suffocating iciness to the setting, and it’s almost painful how beautiful it is.

I may not be the biggest 2NE1 fan. In fact, one may be inclined to say that I’m not at all a fan of their music. However, as a group there’s no denying that their chemistry and the way they’ve always managed to come together to create something special is to be admired. Visually, they’re definitely one of those groups that never fails to surprise and delight. “It Hurts (Slow)” is no exception. With their future as a group up in the air — with CL’s US debut, Minzy in dance school, Dara taking on more acting projects, and Bom still largely MIA thanks to a twisted and quite deplorable bit of netizen “justice” — it’s good to look back to when the group was ready to take on the world and had a good shot at becoming one of South Korea’s most interesting if not inspiring female idol groups.