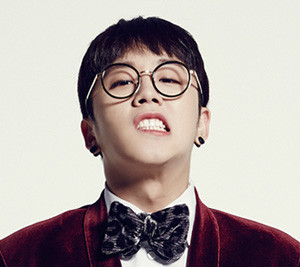 To say that Taeil‘s solo debut has been a long time coming is an understatement. As Block B‘s powerful vocalist, he’s shown that he has the chops to carry a ballad by himself (“Where You At?” from the Blockbuster album). Now, he’s officially able to stand on his own as a soloist with the release of his debut single, “Shaking.”

Produced by 40, “Shaking” is a smooth ballad with simplistic instrumentation. Other than a few backing vocals here and there, the only other sound outside of Taeil is the piano.  By having a piano as the only backing instrument, the focus is firmly on Taeil’s vocals.  As for Taeil’s vocals, he has a mid-range that allows for a lot of room without straining. Yes, that note at the end sounded loud and strained, but there was strong emotion behind it, so it’s somewhat forgivable.

“Shaking” tells the story of what seems to be a one-sided love. Taeil is a guy who has fallen for his long-time friend. Every time she comes around, his emotions become shaky – like having butterflies from being in love.  The song uses nature as metaphor for the feelings he has for his friend. All-in-all, it’s a rather innocent kind of song about love. The lyrics read more like a romantic poem sent to crush than a song, which makes it even sweeter.

The MV for “Shaking” is nothing like what you’d expect from Block B. If that’s what you are looking for, then you should perhaps move along – or just listen to the song.

The main character of the MV is played by actress Nam Ji-hyun. And, she’s the only person visible in the MV.

Much to the dismay of some fans, Taeil doesn’t make an appearance in the MV. That is somewhat understandable, given his general lack of being in the spotlight within Block B. Although it’s easy to joke that Taeil is pulling a K.Will (who practically never appears in his MVs), there is a purpose behind the absence of Taeil actually appearing: it goes with the song’s narrative. “Shaking” is sung from the first-person perspective, and thus, the MV is viewed from the same perspective. 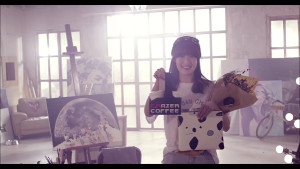 The MV opens with Nam Ji-hyun walking into what appears to be the first-person’s art studio. She offers him coffee — just like in the lyrics – and happily chats and pets the dog. Due to her holding flowers that she didn’t give to her friend, it’s safe to assume that they are for someone else, likely a boyfriend.

She then gets a phone call, which starts off nicely, but leaves her in such a state that she drops everything but the phone. The exact nature of the phone call is up for interpretation, but in light of the surroundings and lyrics, it’s likely the person on the phone was her boyfriend, who had just become her ex-boyfriend. When Nam Ji-hyun reveals her distress, the friend picks a unique, i.e wrong, way of comforting her.

Of course, as it sometimes goes in these one-side loved situations, the guy picks the wrong moment to make his move. The girl had probably just gotten dumped by her boyfriend, and the friend decides to kiss her while she’s in a state of shock and despair? Not smart, and it’s not surprising she quickly leaves. This should be a lesson to anybody else who tries such a thing: heartbreak isn’t always the best time for confession. 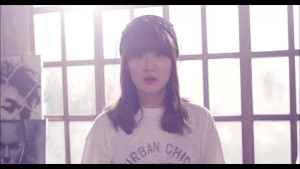 In the closing of the MV, we see Nam Ji-hyun fleeing the scene and the song ending on a sudden last phrase by Taeil. The song lyrics and MV line up in plot and it all concludes there on that sad note.

Taeil showcased how smooth of a vocalist he is with “Shaking.” His ability to put forth the necessary emotion, without overpowering us with an exceeding amount of loud notes, is a plus. Lyrically, the song is more sweetly passionately than loudly passionate, so this ability helps convey the necessary feeling. While the MV isn’t anything exciting, it still relays the message of the song quite well. Here’s hoping Taeil gets another solo soon. His soothing, rich vocals are needed and appreciated.