K-pop Throwback: Back To Shinhwa's Roots With "T.O.P" 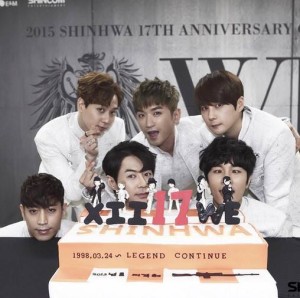 Welcome to the next edition of K-pop Throwback, where we visit a veteran idol group’s boyish past. Touted endlessly as the longest-surviving-intact idol group, Shinhwa recently celebrated their 17th (!) anniversary on March 24. And just earlier this month, they released their 12th full-length album We, whose title song “Sniper” went on to achieve all-kills on music shows. These ahjusshis definitely know how to slay.

Going back to their beginnings, Shinhwa debuted on March 24, 1998, with “Resolver”, as six teenagers dressed in oversized shirts and pants. Touted as the ‘it group’ that would rival H.O.T, Shinhwa was expected to take the K-pop world by storm, following in the footsteps of their seniors S.E.S and H.O.T. Due to unprecedented bad timing, the IMF crisis struck Korea a week right after their much-anticipated debut, and their debut album Resolver charted with minimal success. They tried to regain momentum by following up with their second promotional track “Eusha Eusha”. And, by sheer bad luck, their music video, which was filmed in a pool, couldn’t be played on television because of insensitivity to a flood disaster that hit Korea.

Shinhwa kept on waiting for a possible turnaround in their situation, but none came. SM also chose to focus more on H.O.T and S.E.S, who were undoubtedly bigger and more profitable at that time. After months of promotion, their debut album still left them in the red, and they faced the cruel fate of possible disbandment.

Their second album T.O.P left them in a make-or-break situation. It was agreed with SM that if Shinhwa still didn’t hit it big, the group would split, and the members would give up and go back to school. With little help from SM, Shinhwa managed the bulk of the second album’s promotions on their own, choreographing themselves and bringing in composers and lyricists. As a group that failed the first attempt, they couldn’t demand that effort and attention be taken away from their more successful seniors.

And, indeed, their sophomore effort was a huge hit. While “Eusha Eusha” boasted a cuter and boy-next-door image, “T.O.P (Twinkling of Paradise)” was their step towards an edgier and tougher concept. Even with minimal promotions, the sophomore album T.O.P spent 24 weeks on the charts before it dropped. It unexpectedly managed to recoup all the losses of the first album and signified the rise of Shinhwa.

“T.O.P” is identifiable by its haunting use of Tchaikovsky’s “Swan Lake” music score, elegant choreography lines and elaborate use of acronyms (anyone want to list and explain them?); for the first time, it gave the public a hint of Shinhwa’s colour and style. “T.O.P” was Shinhwa’s first significant commercial success, garnering a total of six music show wins, while accompanying title track “Yo” received seven later on. It’s one of the iconic songs of K-pop, spurring countless covers by reigning idol groups, such as Super Junior, SNSD, Infinite, Teen Top and BTS. A Shinhwa signature, it’s crazy to think that the Shinhwa we know today might have ceased to exist without it.

While most groups break down on stage during their first win, the members were reasonably calm — possible shell-shocked — bursting into tears only after they returned to their car. One by one, they called up their trainers and instructors to express their infinite gratitude. After their disappointment in their first album, it’s no surprise their hard-earned success tasted all the sweeter. 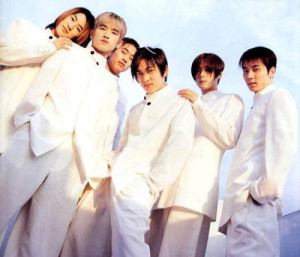 Shinhwa’s legend is something that’s only achievable through impeccable teamwork, perfect chemistry and perfectly aligned stars. Although they never garnered the same amount of international fervour as their TVXQ juniors did, the six of them are recognized and respected industry-wide for their humility, hard work and solidarity.

And this is not to say the past seventeen years have been smooth-sailing either. They survived many trials and tribulations – Andy’s hiatus, military service and even SM’s attempt to re-sign only part of the group. Perhaps their longevity can be wholly attributed to Eric’s leadership and the members’ respect of him. In 2003, when Shinhwa’s contract ended with SM, Eric, who was supposedly offered a contract four times that of the other members, took a one-fourth pay cut so that all the members could sign on together with Good Entertainment.

Such loyalty in idol groups is once in a blue moon, when you coincidentally put into the same group six good-natured boys who love each other and their fans more than themselves. They have experienced all sorts of ups and downs over the last seventeen years, but it’s resulted in an even tighter bond between the boys. It’s a heartwarming reminder that, yes, even in the corporate and unfeeling entertainment world, friendship is still possible.

Happy 17th Anniversary, Shinhwa! Please go on to celebrate your 27th, 37th, and even 47th anniversary.