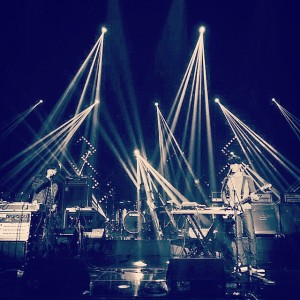 Hello, indie gem fans! It is again that wonderful time when we get to share Korean indie music with each other. It is my absolute pleasure today to write about one of my favorites, LudiSTELO. When a band describes their sound as “electronic / space rock,” you know you have something unique, and this could not be more true with LudiSTELO.

LudiSTELO formed in 2012, with Sangjin (vox and synthesizer) and Ash (vox, guitar, and synthesizer), and soon after Juyeon (drums) joined. Prior to their first album, they released multiple singles, including “Play the Earth,” “Delight,” and “Water Roof.” The band then released their first full-length album Experience in 2014, and shortly after delighted with a second full-length, Flashpoint, at the beginning of this year. Two full-length albums in two years might seem like too much, too fast, but the albums’ cohesion and each song’s immaculate composition shows that LudiSTELO is bursting with talent.

Perhaps this is because each of the members had been in bands prior, and this experience shows in how extensively they experiment with their instruments in their songs. Korea is full of great electronic musicians, but LudiSTELO is unique in how they blend both acoustic instruments and multiple types of electronic sound, such as analog synthesizers along with programs on a computer, for a multi-layered listening experience. One of the reasons the band stands out is because at any given moment, their songs exhibit both the heady thrill of electronic melodies and the groundedness of a drum set. In between these poles is Ash’s electric guitar, which has additional electronic sounds layered through syncing with a computer. This instrument experimentation is ambitious, but due to their experience, LudiSTELO pulls it off with seeming ease.

Moreover, what sets LudiSTELO apart is how they create a dynamic, sonic evolution in each of their songs and across their albums. This is best illustrated by listening to their music, so let’s jump right in. You could begin anywhere with LudiSTELO, but “Play the Earth” is a good entry point as the first song off of Experience (music starts at 0:40 in the following video):

Every bit of this song counts, and the band has planned every sonic move to take their listeners on a journey; from the opening that creeps up on you, to the unmistakable soaring synth, to the grainy, bit-like bridge. Even their purposeful fade-in sounds masterfully mixed. While something like sound level might seem like a trivial detail, LudiSTELO makes one realize how impactful dynamic sound levels can be.

“Water Roof” is another song off of Experience that provides a nice contrast to “Play the Earth.”

While the former exhibits a more trance-like sound, “Water Roof” shows off the band members’ rock experience. It starts off hard, with a driving guitar; however, since “one-note” is not in LudiSTELO’s vocabulary, they let it go in the middle, pairing back the music before building it up again. There is a nice push and pull to this song, going in between extremes but never ricocheting out of control. They take their time, stopping in between to play with different levels of intensity.

It is probably obvious by now that lyrics are not central to LudiSTELO’s songs. It is not that they are without meaning (perhaps most obviously, “Play the Earth” illustrates the band’s inspiration for their first album – the earth), but that what the vocals contribute is another layer of sound with which to play. Take for example, “Blossom,” off of their second album, Flashpoint:

“Blossom” has a good amount of vocals, but they are utilized like another sliding synthesizer, eventually melting into the other instrumentation. “Blossom” is also a good example of how LudiSTELO’s sound expanded over two albums. While not every song on Flashpoint sounds quite as psychedelic as “Blossom,” it shows how each member is given a more prominent role, taking turns to lead the different movements in the song.

Lastly, my favorite song off of Flashpoint is “Space 5432.” This is not only because I am a sucker for anything with “space” in the title, but also because it combines the best of hard rock and electronic music. There are the parts that let loose with the drums and guitar, the parts that build electronic soundscapes, and the parts that bring all those elements together for an intergalactic experience (at least what I imagine to be one).

If you like what you hear here, I also encourage you to listen to their albums from start to finish to get the full effect of their composition. LudiSTELO is a band that truly keeps on giving as each listen brings a new facet of their songs to the surface. I can’t wait to hear what they put out next.